French premier to meet with protesters amid anger over taxes 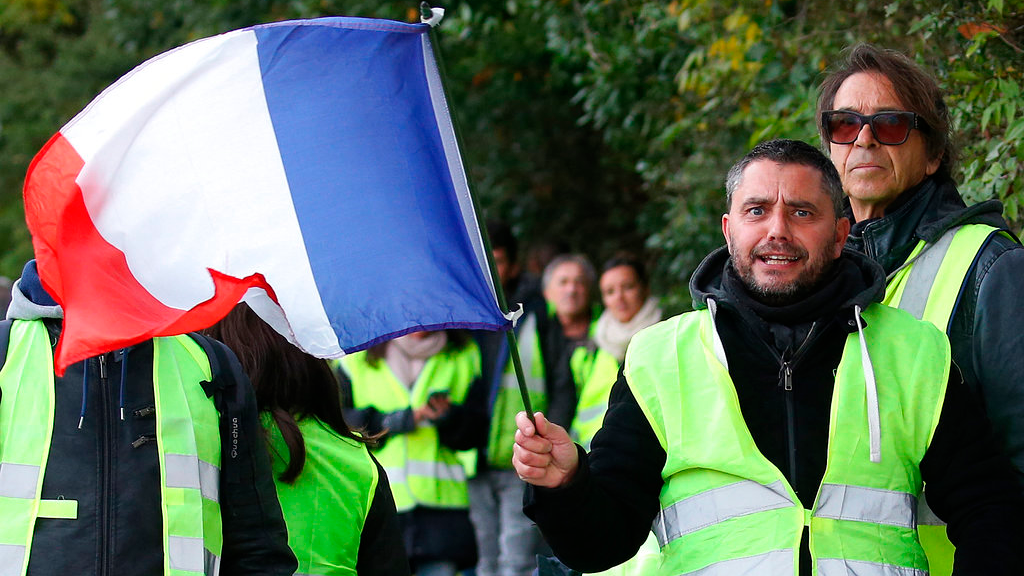 French Prime Minister Edouard Philippe will meet with some protesters' representatives on Friday in an effort to calm tensions over rising taxes, a first since the movement started two weeks ago.

The government's move comes amid calls for a new actions Saturday across France, including on the Champs-Elysees in Paris, where a protest last weekend degenerated into violence.

Motorists protesting against a fuel tax hike have been joined since by farmers, white collar workers, retirees and others in the "yellow jackets" movement that now involves a broad range of demands related to the country's high cost of living.

Their list of demands include tax cuts, the creation of a citizens' assembly, state-funded subsidies to help companies boost hiring, and higher pensions and a higher national minimum salary.

Protesters call themselves the "yellow jackets" in reference to the fluorescent security jackets they wear, items that are mandatory in French cars.

They have widely used social media to organize their demonstrations.

Their anger has been fueled by a broadening range of issues related to the cost of living in France, rising prices and the high tax levels. They also denounce perceived elitism by President Emmanuel Macron, seen as being out-of-touch with ordinary people.

Recent polls show that up to 80 percent of people are sympathetic to the movement.

"Mr. Macron, you don't deserve to eat my chickens," poultry farmer Alois Gury said in a video made with his mobile phone, wearing a yellow jacket in his farm hangar as hens cackled. The video of the 33-year-old farmer from eastern France quickly went viral this week on French social media.

The chef at the Elysee presidential palace, Guillaume Gomez, has since said the farmer wasn't among his suppliers.

"I'm in trouble ... My mother is buying 50 euros ($56) in grocery shopping every Tuesday because I don't have the money," he said.

The farmer is just one example of the diversity of the movement and the breadth of anger at Macron.

Prominent figures among the "yellow jackets" include a truck driver living south of Paris who makes live videos on Facebook, a singer from southern France who wrote a humoristic song to tell Macron "we want to pay less" and a 33-year-old founder of an online cosmetic shop who launched an online petition for a fuel tax cut that reached 1 million signatures.

A 51-year-old accordion player from western France, Jacline Mouraud, is considered a precursor of the movement since she posted a video on Facebook in mid-October which has tallied over 6 million views.

"We get in our car and we are considered someone who will potentially pay," Mouraud said, mentioning the fuel tax hike and fines generated by road radars. "We are fed up!"

Philippe acknowledged Wednesday in France's lower house of parliament that "in the last 10 years, the purchasing power has decreased. That's a fact, that's indisputable."

The government has so far maintained the fuel tax hikes, which are meant to help reduce France's dependence on fossil fuels.