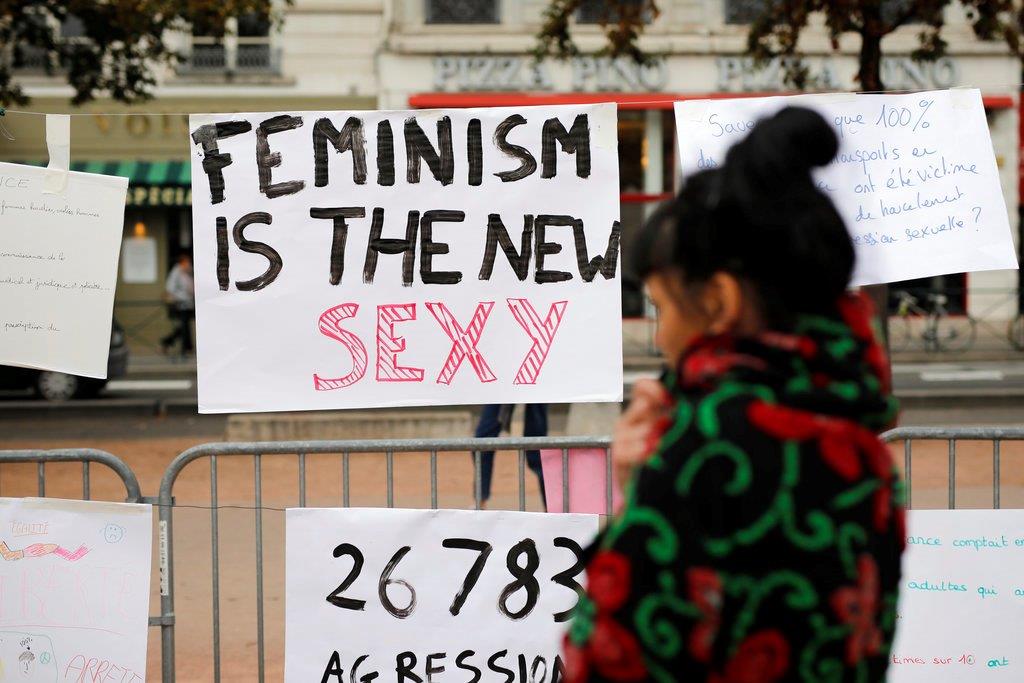 A woman reads a banner during a demonstration to support the wave of testimonies denouncing cases of sexual harassment, in Lyon, central France, Sunday, Oct. 29, 2017. French women are protesting sexual abuse and harassment in 11 cities across the country under the #MeToo banner in the wake of mounting allegations against Hollywood mogul Harvey Weinstein. (AP Photo/Laurent Cipriani)

Women protested sexual abuse and harassment Sunday in 11 French cities under the #MeToo banner in the wake of mounting allegations against Hollywood mogul Harvey Weinstein.

Carol Galand, an independent journalist who organized the protests, told The Associated Press that it's important this movement went beyond social media.

"Some women don't have the strength to handle alone those aggressions that they faced. So they really need to be together, because together we are stronger," she said.

In Paris, several hundred people protested Sunday on the Republic Plaza. Some chanted "Aggressors are liars" and held banners saying "I will not remain silent" and "Respect women." Many also had banners with the #MeToo motto.

"It's really important for us to make our voices heard, as women, because we are not equal," said American student Brook Djayan, 25. "In France, in the U.S., anywhere, we're really not equal and I think it's important that we just come out and say so."

Tara Bomberg, a 21-year-old student, said she travelled a lot and noticed the problem everywhere, including in France.

"Everywhere you go, you get words after you or you're in some nightclub and someone tries to touch you, or even worse ... It's a big issue and every girl I know has been in this kind of situation," she said.

French statistics show that over 80,000 adult women face rape or attempted rape every year in the country but only 10 percent file a complaint.

The French government last week proposed a bill that aims to eventually make harassment against women on French streets an offense that will be punished with fines.

Latest front in Weinstein scandal: Statehouses say 'me too'