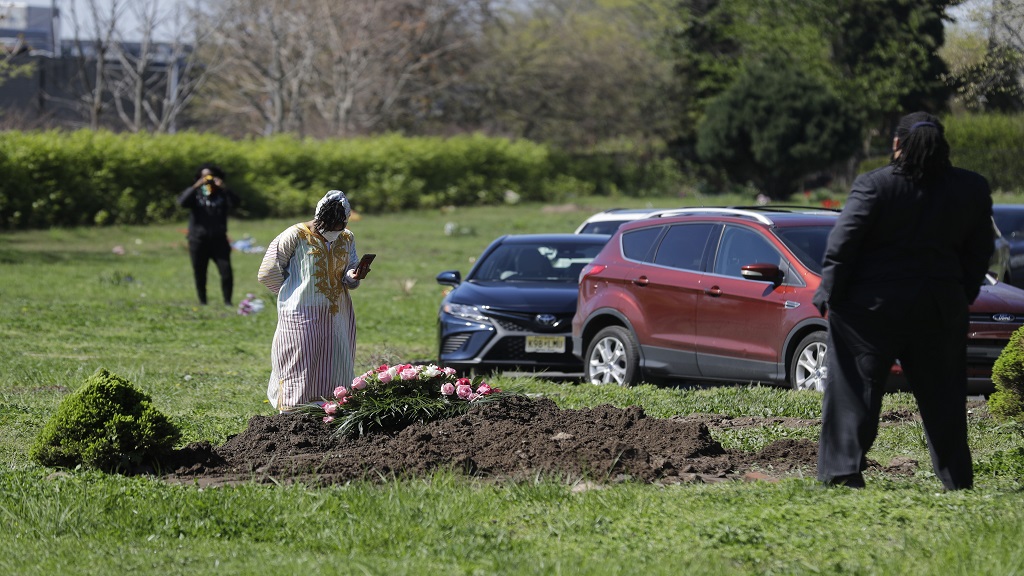 Family and friends watch from a distance or their cars as Erika Bermudez stands over her mother Eudiana Smith's grave after she was buried in Bayview Cemetery, Saturday, May 2, 2020 in Jersey City, N.J. Bermudez was not allowed to approach the gravesite until after cemetery workers had buried her mother completely; other members of the family and friends stayed in their cars. (AP Photo/Seth Wenig)

Mohammad Altaf, the generous spirit. Eudiana Smith, the trailblazer. Servius Collin, the caretaker. All were taken by COVID-19. And in death, all were robbed of the funerals they deserved.

As the coronavirus pandemic worked its way toward 100,000 US deaths, a wave of shaken families has had to honour the dead apart and in small groups during an era of social distancing.

Restrictions on gatherings are only now being loosened, and many have been forced to deny themselves the collective show of affection that helps the living cope with grief.

When Smith, a retired mental health professional who died at age 73, was laid to rest at a cemetery this month near her home in Jersey City, New Jersey, mourners watched from their cars as workers interred the casket. Then, only one person at a time was allowed at her graveside. 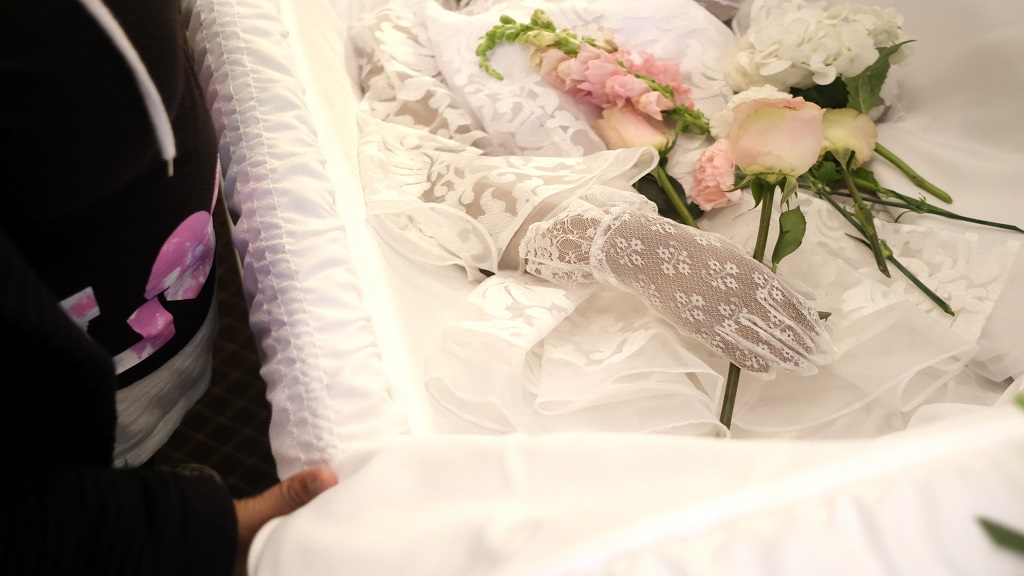 Nahasia Robinson, who died at age 27, is seen with flowers in her hands during a viewing at The Family Funeral Home, Thursday, April 30, 2020, in Newark, N.J. A wave of shaken families has had to honour the dead apart and in small groups during an era of social distancing. (AP Photo/Seth Wenig)

“My mother was healthy and still full of life,” said her daughter, Erika Bermudez.

She called her mother a trailblazer, the first in the family to emigrate from Jamaica to the United States.

“I was robbed of the experience of being able to celebrate her life in a manner that would offer some kind of respect for the woman she was," Bermudez said.

Bermudez did her best, live-streaming the ceremony to friends and family who couldn't attend. 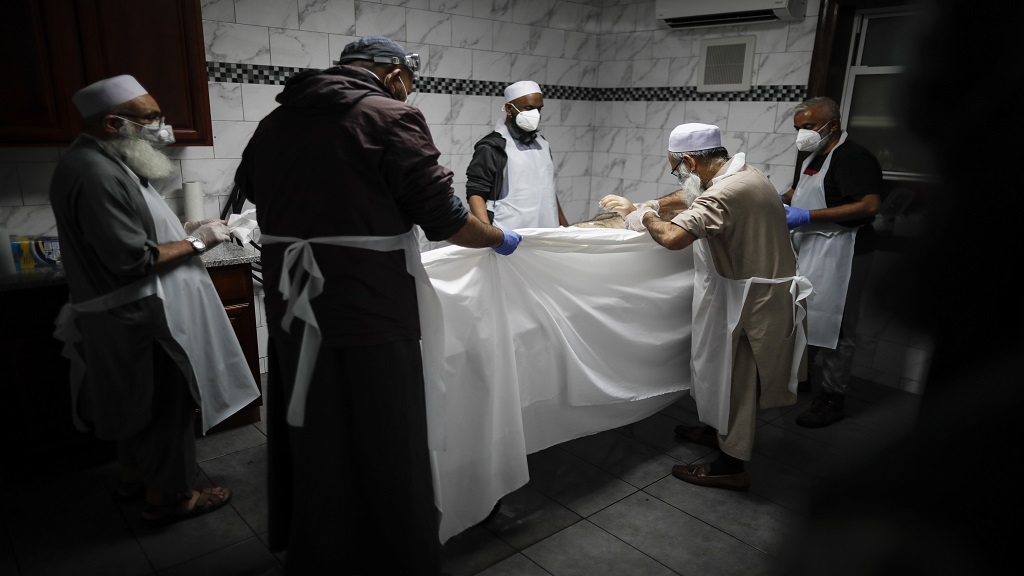 The body of Mohammad Altaf, who died at 48 of COVID-19, is ritually washed and wrapped before being given funeral prayers at Al-Rayaan Muslim Funeral Services, Sunday, May 17, 2020, in the Brooklyn borough of New York. (AP Photo/John Minchillo)

After Altaf, a car service driver and father of three young children, died in Brooklyn at age 48, two dozen men gathered at Al-Rayaan Muslim Funeral Services on May 17 for the traditional washing and prayer ceremonies.

“My brother, he’s got so many good friends, I was expecting maybe too many people would participate in the funeral," said his younger brother, Tariq Aziz. “But because of this kind of situation, it’s very risky."

Still, Aziz said, he is grateful to have given his brother his last rites, as the devoutly religious man known among his fellow Pakistanis for generosity and kindness would have wished.

“People who passed away with this kind of disease, the people, they don’t want to touch it,” Aziz said. “We’re trying not to think too much. We just keep praying for him that his soul is at peace and rest.” 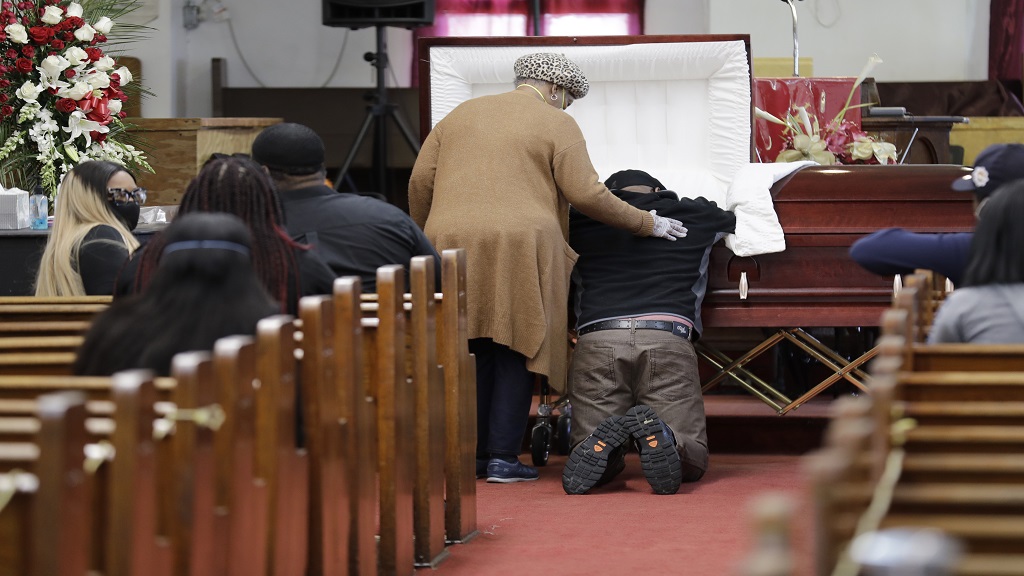 Mourners attend a funeral service for Mattie Halley Robinson at the Church of God in Christ in Jersey City, N.J., Saturday, May 2, 2020. A wave of shaken families has had to honour the dead apart and in small groups during an era of social distancing. (AP Photo/Seth Wenig)

Both New York and New Jersey have, in the past few days, loosened rules that had previously all but shut funerals down by barring groups of people from gathering.

But even the new rules will require subdued funerals.

His own would be a quiet affair.

Three of his children and two of their spouses gathered for a brief viewing at a Newark funeral home on April 30 to see him lay in a sharp suit, red paisley tie and fashionable fedora.

The family waited on the porch of the funeral home until the door was unlocked. They were ushered in and had about 15 minutes to pay their respects and take some pictures to send to relatives who couldn't attend.

Diuene Collin said he felt as if his father had died “with no dignity.”

“I kept on saying," he said, “if I knew my dad was going to leave me like this, that I would have spent more time with him.”

US nursing home deaths soar past 3,600 in alarming surge

Risks complicate reopenings as WHO warns first wave not over