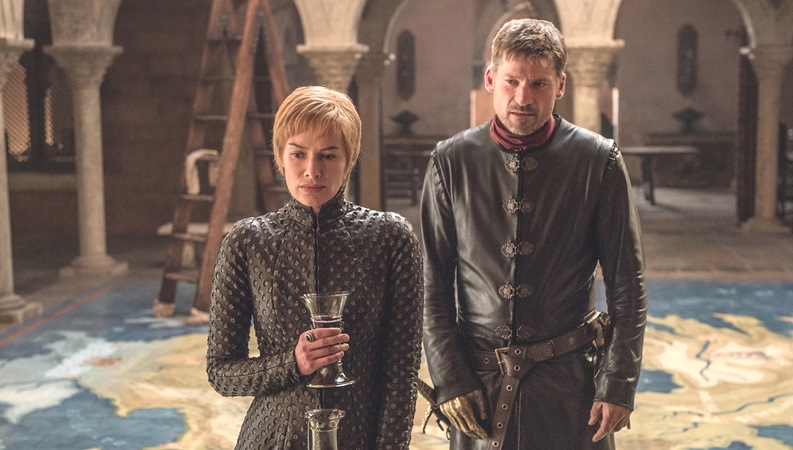 This image released by HBO shows Lena Headey, left, and Nikolaj Coster-Waldau in "Game of Thrones," which premiered its seventh season on Sunday, July 16.

Women dominate Westeros as never before, and it's the same with the "Game of Thrones" ratings.

That eclipsed previous top-rated "Game of Thrones" episodes, including the 8.11 million who watched the season five finale in 2015 and the 8 million who tuned in to that year's opener.

The numbers represent viewers who watched the episodes as they first aired. Many more join the party through streaming and DVR viewings.

There was one eye-catching new man: Pop star Ed Sheeran had a cameo in the premiere.

The glittering ratings will have to make up for a lack of 2017 Emmy gold. The series returned outside the awards' eligibility window, so "Game of Thrones" was missing from the field of nominees announced last week after it dominated last year's Emmys.

Viewer fascination clearly is building as the fantasy saga based on George R.R. Martin's books draws toward its end. After this penultimate season of seven episodes, fewer than the usual 10, HBO has said there will be one more with an expected eight episodes.

That doesn't mean Martin's imagination will be absent from HBO. The channel previously announced that four scripts are in development for possible series, and Martin disclosed in May that a fifth project is in the mix — but how much of a "Game of Thrones" pedigree they'll have is unclear.

On his website, Martin said that each of the concepts under development is a prequel rather than a sequel, and may not even be set on the mythical continent of Westeros. Rather than the terms "spinoff" or "prequel," Martin said he prefers "successor show."

Game of Thrones: Shame Cersei, you lost your food supply