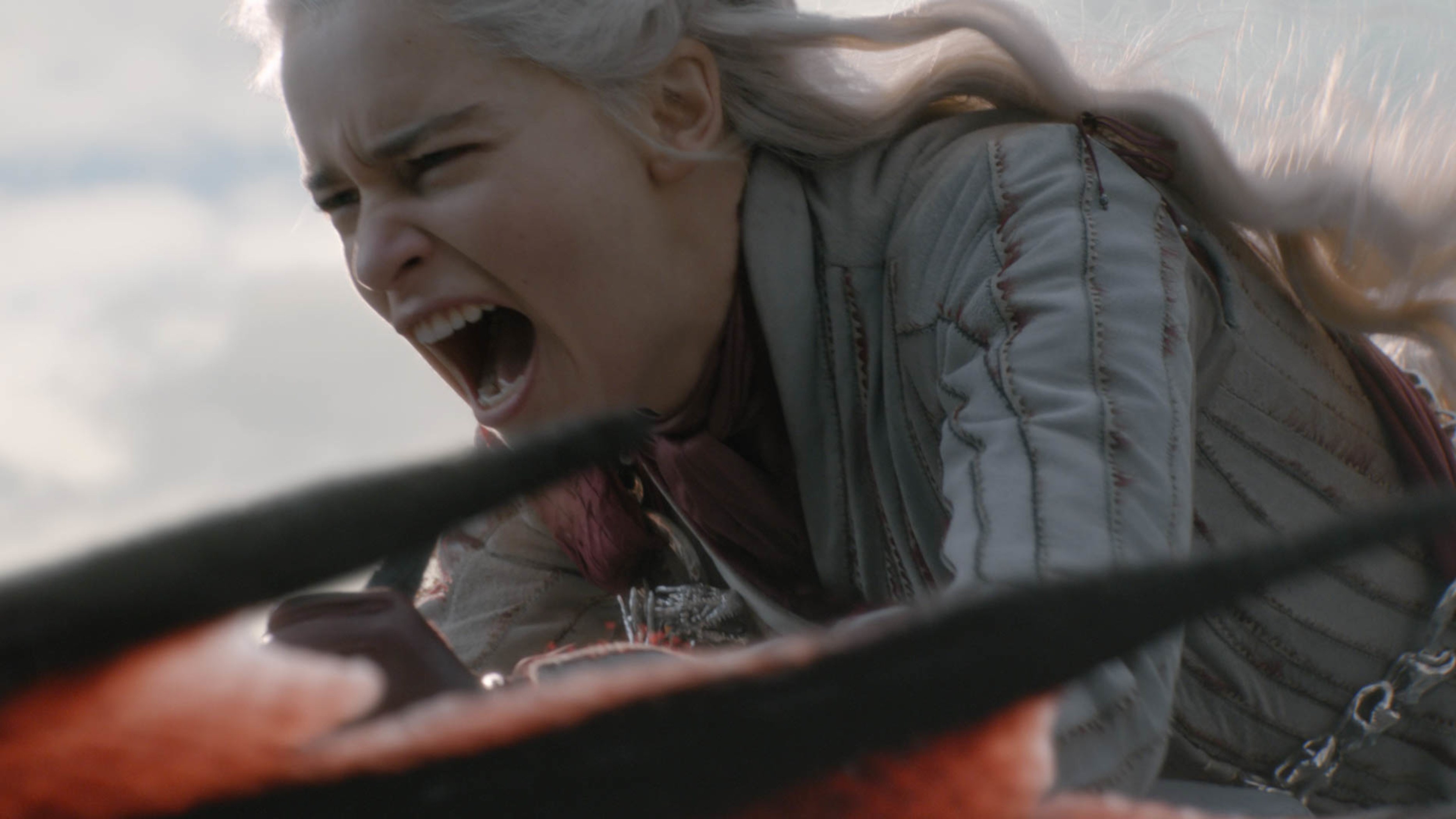 My eyes still burning from the Battle of Winterfell. I could have sworn for a minute that episode was a pirate DVD.  Arya Starks fancy knife move made up for any visual discomfort #madddd

The Night King and his army of the dead are vanquished and humanity is saved. We can all get along right? Of course not! This episode plunges us straight into the bachs as Dany makes a grief-stricken push for the Iron Throne. A push that is complicated by Jon’s revelation that he is, in fact, Aegon Targaryen, her nephew and the true heir of the Seven Kingdoms.

The episode starts with a dramatic cremation for the fallen of the battle of Winterfell. Dany is obviously in a state over Ser Jorah Mormont of the Friend Zone. Her emotional state throughout this episode is a harbinger of things to come.

Afterwards, they throw a feast to celebrate their victory. Everyone except Dany and Jon are having a grand time. Dany spots Gendry and starts to drama him on some Baratheon smalls. It hardly seems the time or the place, but she then lightens up and promotes him to the Lord of Storm’s End. Not bad for a bastard.

This was the episode of tears and heartbreak. Gendry, being the sweet soul that he is, catch a break and wants to ride off into the sunset with his new bae Arya. Of course, Arya have people to kill and not about this wife life. The man literally bends the knee and gives a truly heartfelt proposal. Little did he know that Arya “one nights” em. This witch kisses up the man, blanks him and go back to her archery oui! I wonder what school she went?!? #redwomanschool

Back inside the Great Hall, men getting sauced. Within the heat of the puncheon, men start to rate up Jon. All of that further stresses the already disturbed Dany who calls it a night.

Meanwhile, Tyrion and Jaime Lannister are playing “Never Have I Ever” with Brienne and Pod. It’s all fun and games until Tyrion calls out Brienne’s virginity. She blushes and buss the tape one time, Jaime follows her into her bedchamber and you know the Lannister boys don’t miss. More tears, Tormund, I feel your pain. From the time he sees Jaime slithering up them steps Tormund knows its a wrap. Fortunately, he knows how to drown a tabanca the right way. The night ended well for him.

Jon’s head nice and we know that is never a good time to work it out with the lady. Alas, he takes a swing at talking to Dany about the elephant in the room. They kiss, but Jon suddenly feels sick, though it's unclear whether it’s from the rum, or from the fact that he smooching his aunty…

Dany professes her love for Jon and begs him not to share the secret of his true parentage with Sansa or Arya. She fears that no matter how noble Jon’s intentions, he would be forced to take the throne by family and fiefdom. And you know what? I think she is absolutely right and Jon is an idiot.

The next day in the war room the heads begin the what to do next conversation. Dany wants to run straight into Cersei but Sansa wants to give their surviving warriors a couple of weeks to recuperate. Dany is not pleased with Sansa’s wise counsel and believes that Lady Stark wants to renege.

Jon, of course, backs his girlfriend, and she gets her way.

Arya calls an emergency family meeting that includes Bran who of course, already knows about Jon’s secret and everything else. Arya and Sansa beat him over the head about family, Jon gets that doltish look on his face again and prepares to do something stupid. He makes them swear not to tell anybody about what he is about to reveal. Ten seconds later Sansa tells Tyrion and Tyrion tells Varys. Great work Jon!

Bronn is a sellsword and when someone pays him to kill somebody, Bronn delivers. Would he do that to his friends the Lannisters tho? Yeah, pretty much! He holds the boys at bow point and lets them know he is fulfilling his contract unless the price is right. Highgarden seems fair. Bronn adds that he’s only cutting a deal because he thinks that having two dragons gives their side the winning edge.

This is important because…

Dany’s armies are ambushed by Euron Greyjoy’s fleet and Rhaegal the dragon is shot dead out of the sky. Cersei has apparently been shopping for advanced weaponry to deal with the winged threats. After clipping Rhaegal, the Greyjoy spears are turned on Dany’s small fleet. It is completely obliterated and Missandei is taken captive by the golden company. Dany is beside herself with grief.

Just before this disastrous turn of events, Varys and Tyrion whispered on the implications of Jon’s true parentage. Vary’s doesn’t trust Dany and clearly feels she shouldn’t be Queen. Tyrion is less sure and suggests a wedding could be a solution. Varys thinks that Jon is a wuss and Dany would dominate him. The two strategists are at odds on what to do next. Great job, Sansa!

The Hound and Arya riding west both alluding to unspecified, unfinished business. Clegane V Clegane is the matchup everyone is looking forward too. Arya has a list of people to whack, not least among them Cersei. But let's also remember that the mother of Dragons has green eyes as well. We are not certain who is on her kill list, but when Arya is after you, you better watch out.

At King’s Landing, Cersei and Euron are celebrating their wins.

Cersei mentions her pregnancy and while Euron clearly is being led to believe the baby is his. Cersei needs to remember that this Euron dude is not a man to give jacket. Cersei playing with fire.

Dany's ready to burn it down, mad king style. This would not only play into Cersei's hands but also cast Dany as Aery’s version two.  Varys and Tyrion point out that slaughtering civilians may not be the best way to win them over, but Dany doesn’t care. Perhaps Varys’ concerns are well-founded. Tyrion final convinces Dany to at least try to talk to Cersei before torching the landing.

Up North, Brienne and Jaime have gone Facebook official and moved in together. it’s all ruined when Sansa tells Jaime that Cersei has taken her first victory over Dany. He packs up in the dead of the night and sneaks out of their love nest, but Brienne catches him right before he takes off. More tears again. See what them pretty boys get you. All now Tormund making breakfast. It is still heartbreaking to see our freshly broken Brienne in tears as Jamie rides out.

Get yourself a Tormund next time.

Dany and Cersei come head-to-head in an inevitably futile attempt to get each other to surrender. We can't help but notice that the walls are fortified with Ballistas, the dragon killing artillery from Euron’s ships.

Tyrion tries to reason with Cersei’s hand, Qyburn, which proves to be as useful as talking to a rock. He strides past him to address his sister directly. The man appeal to Cersei whole human side. As Cersei no longer has a human side, everyone is forced to watch Missandei be beheaded by The Mountain. Her final word being Dracarys – Loosely translated to bun it down!

Dany is now insane with rage and grief. Will she rush the ballista-laden stronghold with her final remaining dragon? Sunday can’t come fast enough.

Watch: Local Game of Thrones fans weigh in on their Iron Throne picks