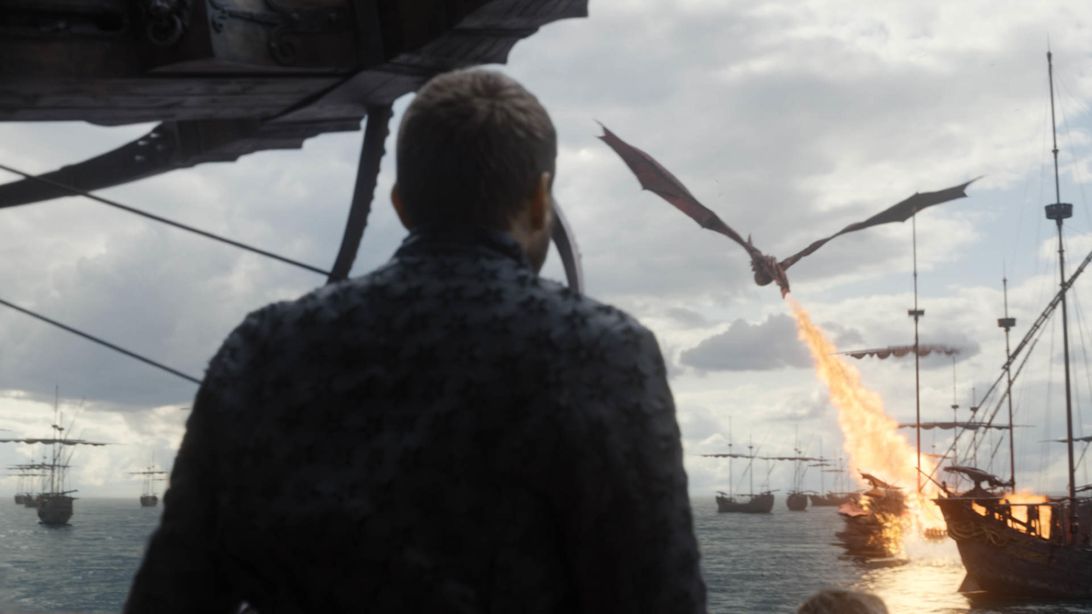 If I didn’t spend the last ten years following this show eh. Steups.

Episode 5 had some of us cursing and the rest of us plotting the poisoning of the writers who killed Cersei so romantically #CueCelineDion.  Clegane v Clegane was one of the highlights of the episode and Arya was kinda fretted me. Overall, a lot of action and insanity in the second to last.

Depression is a serious business. As expected, Dany is mourning her friend, Missandei. She isn’t sleeping or eating, which is just as well, because I personally believe Varys was plotting with the smallie working in the kitchen to slip her some of the “special” pepper sauce.

Jon finally arrived after footing it from the north. Varys meets him on the beach and urges Jon to consider going up for San Fernando East.

We all know Jon is too whipped to consider crossing Dany on this. Tyrion observes from a distance and realises that the time to have a chat with the boss is now.

Tyrion’s plan to throw Varys under the bus does not go as planned. The depressed Dany spreads around the blame to Jon and his loose lips. She also casts Sansa as the architect of a challenge to the throne which Tyrion assisted in by talking to Varys about it.

Dany’s vengeance is fast and cruel as she grills Varys on the beach. Before Dany unleashes the dragon, Tyrion is able to admit that he dropped the dime. The old friends cordially wish each other farewell. Tyrion can’t help but wonder if Varys was right about Dany. #Dracarys

Jon finally gets a moment alone with Aunty Dany, but she’s mad that he told Sansa the scene. In a little preview of the madness to come, she even tries to convince Jon that it was Sansa fault that Varys got toasted.

“I don’t have love here. I only have fear.” The most important line in the entire episode. All she needed was some baigan choka and Dany would have been good to go. But after all the love talk and on the eve of a battle led by a depressed undersexed, power hungry, dragon-riding woman who just wants to be loved.

Tyrion is really beginning to wonder if Varys was right. I mean should you really have to beg the breaker of chains to not commit genocide? Tyrion begs her to at least stop burning everything if Cersei’s armies surrender.

As he tries to leave, Dany brings up Jaime. “Your brother was stopped trying to get past our lines. It seems he hasn’t abandoned your sister after all,” she tells him. “Next time you fail me … will be the last time you fail me.” Gangsta thing.

Tyrion is sure now. This gyal MAD. Tyrion enlists Ser Davos to smuggle Jaime out. He frees his brother and convinces him to try and get Cersei to surrender so that they can save the people from the wrath of the mad queen. Jaime is enlisted to ring the bell and open the gate indicating that the battle is over. It was heart-warming to see them Lannister boys bond for what turned out to be one last time.

Arya and the Hound drift into town on the way to the final showdown. All the players are amped and ready for action. The townsfolk have been given the word that there’s a dragon headed their way. The armies of the North gather at the heavily fortified walls of the Landing, Euron’s fleet floats at the ready, Scorpions all cocked, Golden Company ready for action.  Cersei ready for them, right?

Wrong! Cersei needs a refund! In a few short minutes Dany torches Euron’s fleet, scraps down all of the Landing’s defences and breaks the walls wide open from the inside leaving the Unsullied and Dothraki to devastate the survivors.

Cersei is in denial that in a few short minutes her defences have been eliminated. As the city burns, Qyburn begs Cersei to dust it but she still holds out some kind of hope that the Lannister armies could pull off some sort of miracle. #CloserMyLordToThee

Jon and soldiers are in a tense standoff with the Lannister vanguard. Drogon perches on a building roaring and it is obvious this fight is over. Cersei’s men drop their swords and Jon is visibly relieved.

“Ring the bell, ring the bell!” can be heard all across the city and finally it rings. Tyrion looks relieved. This is Dany literally trips and starts a murderous air strike on the civilian populations. Tyrion and Jon realise too late, that Dany is a few eggs short of an omelette.

Grey Worm, however, signs off on the vengeance mission and begins to indiscriminately kill people in the streets. Jon tries in vain to cool the soldiers’ rampage but that not gonna work. It’s a blood bath.

Meanwhile, Jaime is sneaking up the beach to get to his beloved Cersei when that Euron snake slithers out of the water with a knife. They get into a big pointless fight that Euron loses. A mortally wounded Jack continues his desperate search for Rose. Yes, I’m mocking Cersei's Titanic-esque death. Steups.

Clegane vs. Clegane — a fight to the death, ten years in the making.

Before the Hound finally corners the Mountain for their epic last battle, he convinces Arya to give up the one-way trip to kill Cersei in the crumbling city. Thus starts Arya’s aimless starring role in the rest of this episode. One could almost forget that she is a super assassin that killed the Night King and his whole army.

The Hound’s court manners are on point as he gently greets Cersei, your grace. The Mountain resigns as Cersei’s loyal enforcer and Cersei politely excuses herself.

Round One – FIGHT. It becomes quickly apparent that the Mountain is even more zombie than we thought. The Hound has no chance against a being that feels no pain and seems invulnerable to even a dagger through the brain and a sword through the heart. In a last-ditch power move, the Hound runs the Mountain through a brick wall into a thousand-foot pile driver into the flames below.

Jack finally finds Rose in the crypt and she cries tears of joy. They share a lovers’ moment which almost seems sweet in a disgusting incestuous kinda way. “I don’t want to die, not like this,” she cries. Ever since season one we've fantasized about the foul evil death that Cersei Lannister would endure as punishment for her morbid wickedness. Instead, Jaime and his magical hand hold her close as the collapsing crypt romantically crushes them both.

At this point, I'm holding out zero hope of the genius storytelling to which we’ve become accustomed to appear in the series finale. I just want to see who sits on the chair. In the Game of Thrones, you win or you die!

Watch: Local Game of Thrones fans weigh in on their Iron Throne picks

HBO looks beyond 'Game of Thrones,' maybe back to a prequel