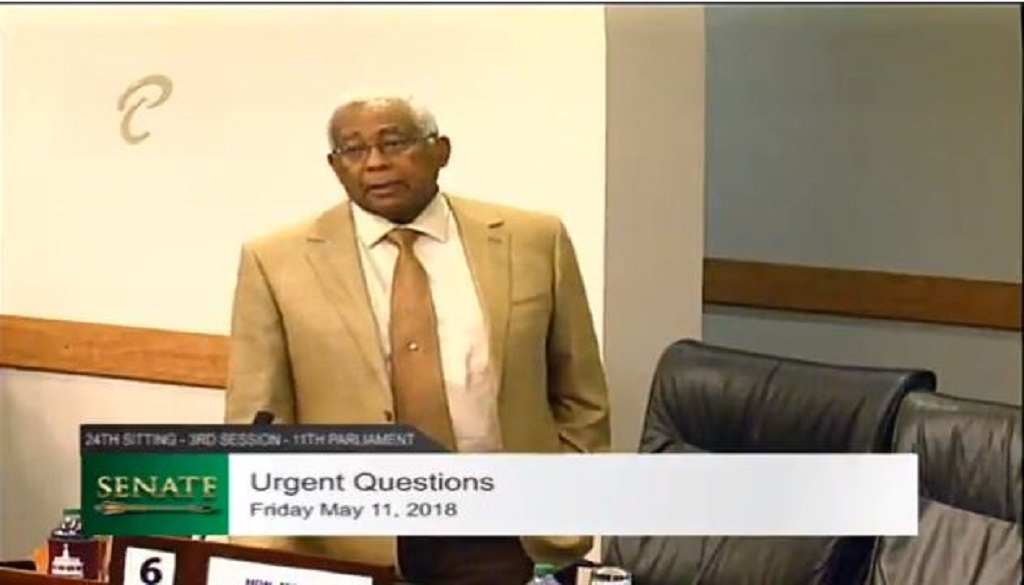 Over 500 students are reportedly affected by the grey-white material that does not burn and is used in buildings as a protection against fire and as a form of insulation.

Inhaled asbestos fibres aggravate lung tissues, which cause them to scar. It can also lead to mesothelioma or lung cancer.

Opposition Senator Wade Mark posed an urgent question to Garcia on the matter. He questioned what steps are being taken to address the issue.

“In December 2017 the Ministry of Education (MoE) was advised that an abandoned government quarters situated close to the school had caught fire and that the building was covered with asbestos sheeting. The burnt sheeting can cause a hazard to the school population. The Minister of Education is in consultation with SWMCOL to provide technical assistance to remove the asbestos from the site. This matter is ongoing.”

Asked how soon the matter would be addressed, Garcia said as a result of the dangers of treating with asbestos, the Government contacted SWMCOL which was slow to respond. He said despite this, SWMCOL has spoken with the Ministry on a daily basis and has given the assurance that it will remove the material.

“We have been assured by SWMCOL that they are going to provide the necessary technical advice and expertise so that the burnt asbestos sheeting can be removed as quickly as possible. May I add that the removal of asbestos sheeting is something that cannot be done by an amateur. It involves and it needs the expertise or experts to do that so that those who are engaged in the removal of the asbestos will not suffer any unpleasant circumstances.”

Meanwhile, Garcia was probed about a faulty sewer system at the school which newspaper reports say is likely to explode.

“The Ministry of Education is in possession of a bill of quantities for the repair of the sewer system and work will commence within the month.”

“...the information that is available to me tells me that the students are not in immediate danger. In fact, only this morning I was told by persons in our department that what has caused the concern is that there is some light that is associated with the system and when that light goes on it will give the impression that something is down, that there might be a choke. So, we have the bill of quantities, we are going to effect repairs but it does not pose an imminent danger but it will be done with despatch.”