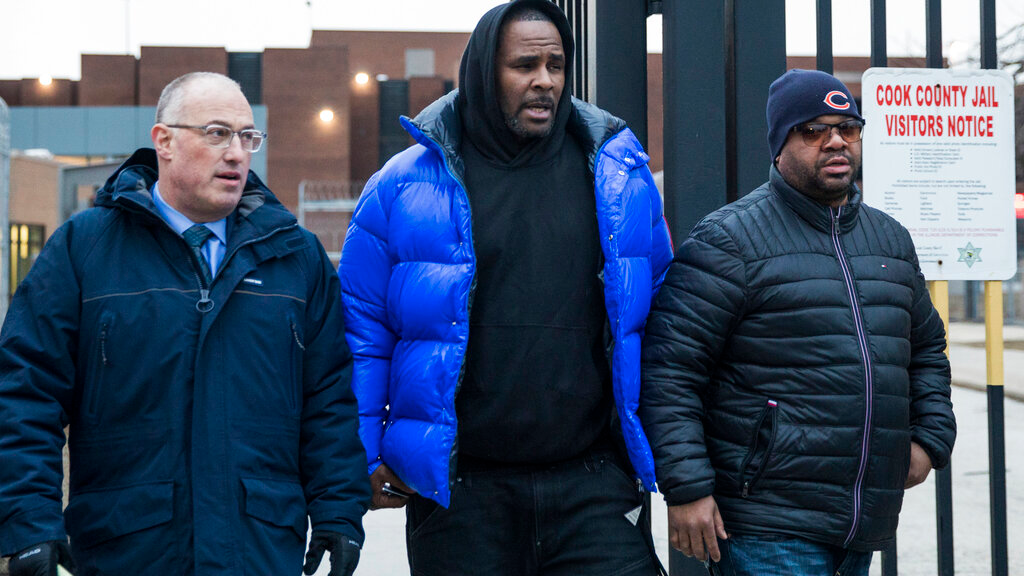 R. Kelly, center, walks out of Cook County Jail with his defense attorney, Steve Greenberg, left, after posting $100,000 bail, Monday afternoon, Feb. 25, 2019, in Chicago. The R&B star walked out of a Chicago jail Monday after posting $100,000 bail that will allow him to go free while awaiting trial on charges that he sexually abused four people dating back to 1998, including three underage girls. (Ashlee Rezin/Chicago Sun-Times via AP)

A German concert arena canceled its contract Tuesday with the organizer of an R. Kelly tour, days after the R&B star was charged in the United States with sexually abusing four people, including three underage girls, dating back to 1998.

"Regarding the new and objective facts, we have decided to cancel the contract," Ratiopharm Arena in Neu-Ulm wrote on its Facebook page. The operators of the arena had already removed advertisements for an April 12 concert from Facebook on Monday.

"We regret the fans' understandable disappointment and ask them to turn to the tour's organizer" regarding possible reimbursement of their tickets, Ratiopharm Arena wrote. The concert's organizer, Thomas Bernard, did not return several requests for comments.

The operator of the Sporthalle Hamburg arena, where the other German concert is planned for April 14, said they'd already tried to cancel the contract with Kelly's representative before the R&B star was charged, but to no avail. They said Monday that they would try to talk to him again now that the legal situation has changed, but could not immediately be reached Tuesday for comment.

Kelly, one of the best-selling music artists of all time, was arrested Friday on 10 counts of aggravated sexual abuse involving four females, three of whom were minors. Kelly's attorney entered not guilty pleas on the singer's behalf Monday.

A judge ordered Kelly on Friday to surrender his passport, ending his hopes of doing a tour of Europe in April. Kelly had defiantly scheduled concerts in Germany and the Netherlands despite the cloud of legal issues looming over him.

The recording artist, whose legal name is Robert Kelly, has been trailed for decades by allegations that he violated underage girls and women and held some as virtual slaves. Kelly has consistently denied any sexual misconduct.

Kelly broke into the R&B scene in 1993 with his first solo album, "12 Play," which produced such popular sex-themed songs as "Your Body's Callin'" and "Bump N' Grind." He rose from poverty on Chicago's South Side and has retained a sizable following. Kelly has written numerous hits for himself and other artists, including Celine Dion, Michael Jackson and Lady Gaga.

Lawyer: Arrangements being made to pay R. Kelly's $100K bail