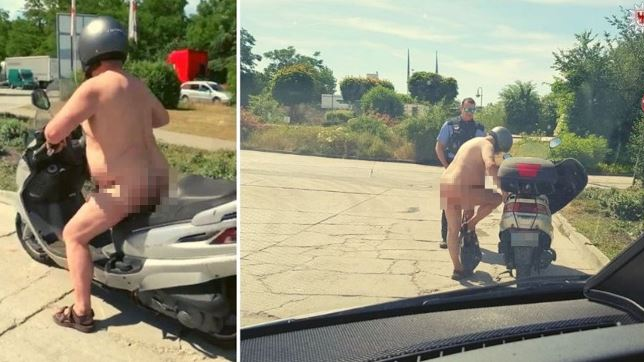 Police stopped the man who was riding in the northeastern German state of Brandenburg. He had reportedly taken off all his clothes as he rode his moped through the streets.

Brandenburg police shared images of the man on Twitter on Wednesday; when the nude man was pulled over, he said to the officer: "It's warm, eh?"

Other German police departments weighed in with jokes, with Frankfurt's police tweeting: "Citizens in Frankfurt pay a lot of attention to their health and skin, and normally are dressed when they're underway."

Germany, like most of Western Europe, is currently facing sizzling high temperatures as hot air comes in from the Sahara. Some parts of the country have seen record-high temperatures this week, with one area near the Polish border recording a temperature of 38.5 degrees Celsius, or 101.3 Fahrenheit.

In some parts of Europe, temperatures are due to reach up to 45 C (113 F), and scientists say climate change is to blame.

Authorities across the continent are utilising a number of options to keep citizens cool. In the Czech Republic, a city worker parked a sprinkler truck in the public plaza and sprayed water into the air.