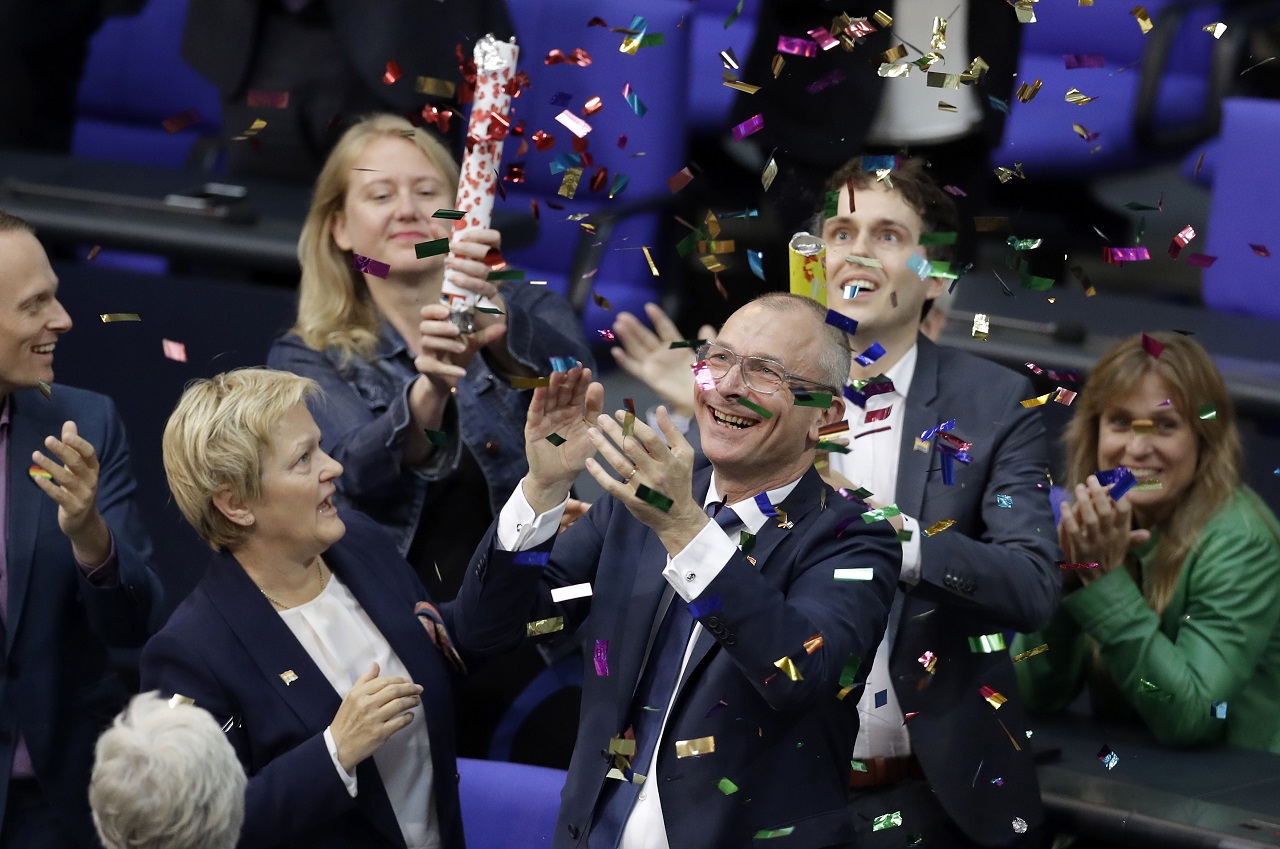 German lawmakers voted Friday to legalize same-sex marriage, a move widely supported across the country that brings Germany in line with many of its Western peers.

Chancellor Angela Merkel voted against the measure, but paved the way for its passage by allowing members of her conservative party to vote according to their conscience.

Lawmakers voted 393-226 to legalize "marriage for everybody," with four abstentions. Underlining the delicate political tightrope that Merkel walked, the "no" votes came entirely from her conservative bloc, although some prominent party members, including Defense Minister Ursula von der Leyen and her chief of staff Peter Altmaier, voted for it.

"This is a historic day," said Greens lawmaker Volker Beck, who leapt to his feet to applaud once the result was announced and was showered with confetti by supporters.

"It is really an amazing victory," said Beck, who has campaigned around Europe for gay rights.

Gay couples outside the chancellery, not far from parliament, kissed and hugged after the decision was announced, waving rainbow flags and carrying signs saying "Marriage for everybody."

"We've been happily married for eight years, but we could never call it that," said 38-year-old Shoshana Brandt, standing alongside her partner and their son. "We are happy and proud that we are now equal and we can live our love."

After years of lukewarm opposition to gay marriage following her party's line, Merkel said Monday that lawmakers could take up the issue as a question of "conscience," allowing members of her conservative coalition to individually vote for it if they wanted.

That prompted her center-left rivals to call for a quick vote on the issue, adding it to the agenda Friday on parliament's last regular session before Germany's Sept. 24 national election.

Berlin Christian Democrat Jan-Marco Luczak, one of 75 lawmakers from Merkel's bloc who voted for the measure, urged his fellow party members to join him.

"It would be absurd to try and protect marriage by preventing people to marry," he told lawmakers in the debate ahead of the vote.

Many applauded Merkel's comments that opened the way for the vote, but Social Democrat lawmaker Johannes Kahrs noted that the chancellor has been a longtime opponent of gay marriage.

"Many thanks for nothing," he said bluntly.

Germany has allowed same-sex couples to enter civil partnerships since 2001, but has not granted them full marital rights, which include the possibility of jointly adopting children, even though gay marriage enjoyed some 80 percent support, according to recent polls.

More than a dozen countries in Europe have legalized gay marriage, all in the western part of the continent, and Germany had been the largest where it was not yet legal. Almost a dozen others have some sort of same-sex unions or civil partnerships, according to the Pew Research Center.

Amnesty International praised the law as a "victory for equality."

"Germany has become the 23rd country to recognize same-sex marriage and has sent a clear message to the world that gay and lesbian people should be entitled to the same rights as everyone else, and to full and equal protection of the law," Amnesty's Europe director John Dalhuisen said.

The new law won't take effect for several months because it still needs to pass the upper house of parliament and be approved by the president, although those are formalities. It is also expected to face legal challenges.

Merkel told reporters later that her vote against the measure was based upon her reading of the country's law concerning marriage but added that she did think gay couples should be able to adopt.

Germany's constitution is vague, saying only that "marriage and the family shall enjoy the protection of the state," but Merkel said that for her, "marriage as defined by the law is the marriage of a man and a woman." Still, she urged all views to be respected.

"It was a long, intensive, and for many also an emotional discussion. That goes for me personally too. And I'm hopeful not only that there will be respect for either side's opinions, but that it will also bring about more peace and cohesion in society," she said.

All of Merkel's potential coalition partners after the September election, including the center-left Social Democrats of her challenger, Martin Schulz, have been calling for same-sex marriage to be legalized.

Analysts have suggested that by opening the door to gay marriage, Merkel removed yet another issue that her opponents could have used against her in an election year — a nod to her pragmatic approach to politics.

In her nearly 12 years as chancellor, Merkel has moved her party to the center and away from conservative orthodoxy, speeding up Germany's exit from nuclear power and ending military conscription, among other moves.