A sense of home: A Trini remembers her visit to Ghana 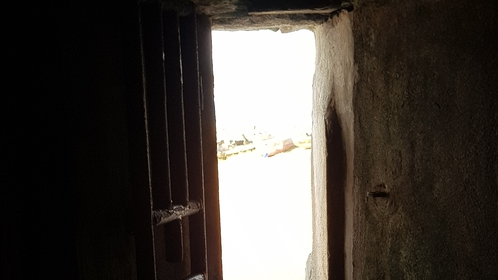 The Door of No Return in Ghana. Photos by Annabelle Brasnell

Last week, Loop ran a story about Ghana's Year of Return in which the West African nation is beckoning the diaspora to return home. One reader, Annabelle Brasnell, visited Ghana recently and shares her experience.

Things you didn’t learn in school #105: Lord Kitchener penned a song, “Birth of Ghana”, in honour of  Ghana’s independence in 1957, echoing the pride of the people of the diaspora for the first sub-Saharan country to gain independence from Britain.

Trinbagonians also felt a special kinship for then-new president Kwame Nkrumah, as his politics was said to be influenced by local born George Padmore and CLR James.

At 238,000 square kilometers (Trinidad and Tobago can fit into it about 46 times) you will need an extended stay to explore the 10 administrative regions of Ghana, each with a unique cultural identity, but with about 10 days you can fit most of the “must see” sites.  Depending on your interests though (not everybody wants to go on safari), tour companies would be happy to create a custom trip for one or many.

This year, 2019, the government of Ghana is offering a special welcome for people of African descent in the diaspora, inviting them to come home during this “Year of Return”.

A visit to Elmina Castle, one hub of the transatlantic slave trade, is an emotional journey to the place many people of African descent regard as the main point of connection to an otherwise unknown history. 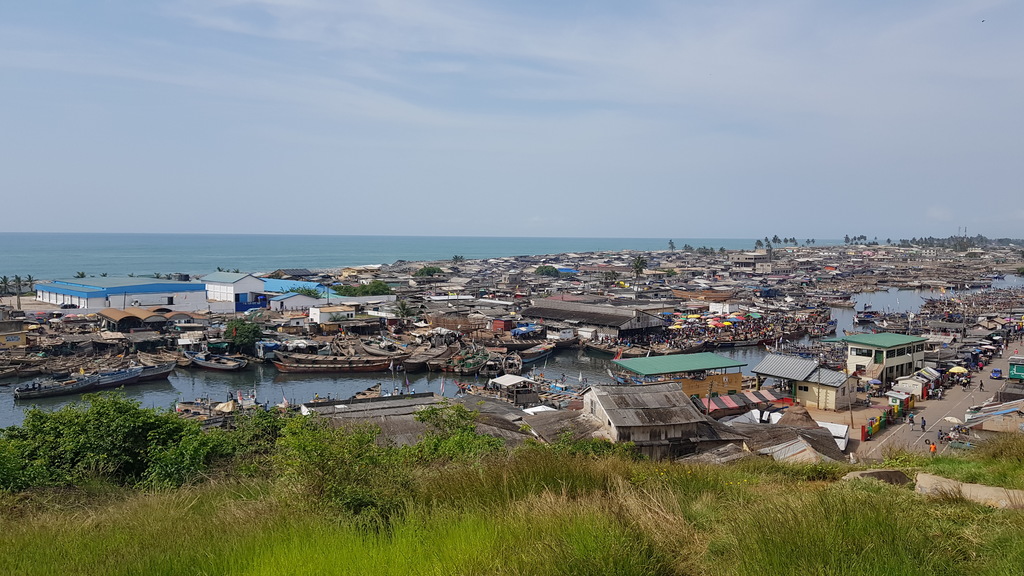 The town of Elmina from the Fort

On a balmy Sunday afternoon, both the Elmina and Cape Coast castles, recognised by UNESCO as a world heritage site, had a steady flow of visitors retracing the steps of ancestors through cells and narrow passages.

The lecturing intonations of the guides’ well-practiced stories and the presence of strangers engaged in low chatter  could be an intrusion on attempts at personal reflection, but  you  can’t long be distracted from the foot high stain on a wall that is a permanent marker of the  height of the human excrement that slaves stood in while they awaited “processing” or  the pitiful, thin “drain” scratched into the floor to allow some of the liquid waste to slowly escape or sense the spirit of  girls in the courtyard outside the female cells at  Elmina where truculent ones were chained in the elements until they became more docile, or where the attractive ones would be paraded for the General who stood on his balcony above the yard and selected one who suited his fancy that day.

At Elmina, a simple wooden sign above the low passageway to the “DOOR OF NO RETURN” automatically slows your steps. While at Cape Coast castle, The Door is in a courtyard—a giant, oversized wooden french-style that was enlarged after the slave trade because the castle still served as a trading post for the Europeans—at  Elmina, the original is still there.

Set about one storey above the ground, measuring about two feet wide and four feet high, it is no more than a window, through which slaves passed, down a ladder into the ship that would anchor alongside. Shackled, and pounds lighter than when they were first captured, adult slaves “easily” went through the narrow width said the guide. The anteroom holds faded bouquets and wreaths left by visitors in memory of the departed souls whose cries echo silently in your head.

Looking through both doors on this Sunday, the warmth and the brilliance of the sun are undeniable.  The water line has long receded, leaving a sandy beach where men mend nets or tend to beached boats in the soft breeze. In the pristine water, the softly clouded sky is reflected and the joy of people playing in the water rings out occasionally. The irony is searing.

Elmina, the village, is a fishing community. It is home to men from other villages along the coast, many living in tin shacks on the water's edge, who eke a living in this bustling port.

On Monday morning, the day before the communal day of rest when no trade to takes place and all hands come together to clean the market and streets, some villagers stand on the massive steel bridge looking out to sea and applaud returning fisherman in their small wooden boats who may have been out for several nights.

It is a testimony to the strength of community and a poignant counterpoint to the commercial Chinese fishing vessels seen out on the horizon, fierce competition for the locals who mainly use traditional methods for harvesting their catch.

About an hour away from Elmina, the Assin Manso slave market was the largest slave market in Ghana, and the acknowledged starting point for people who ended up at the slave castles.

The eponymous river provided the last bath after the arduous trek through the forest, some as far from Nigeria, or nearer, Benin or Togo. Not trusting them, guards stood watch as they were made to wash in the shallowest, near stagnant part of the river for fear they would use the currents to escape.

The former auction yard marks the “point of return” for descendants and symbolically reverses the significance of the door of no return. It is the resting place of Madam Crystal aka Queen/ Granny Nanny and Samuel Carson, former slaves from Jamaica and the United States respectively, whose remains were re-interred in 1998 as a prelude to Ghana’s first emancipation day celebrations. 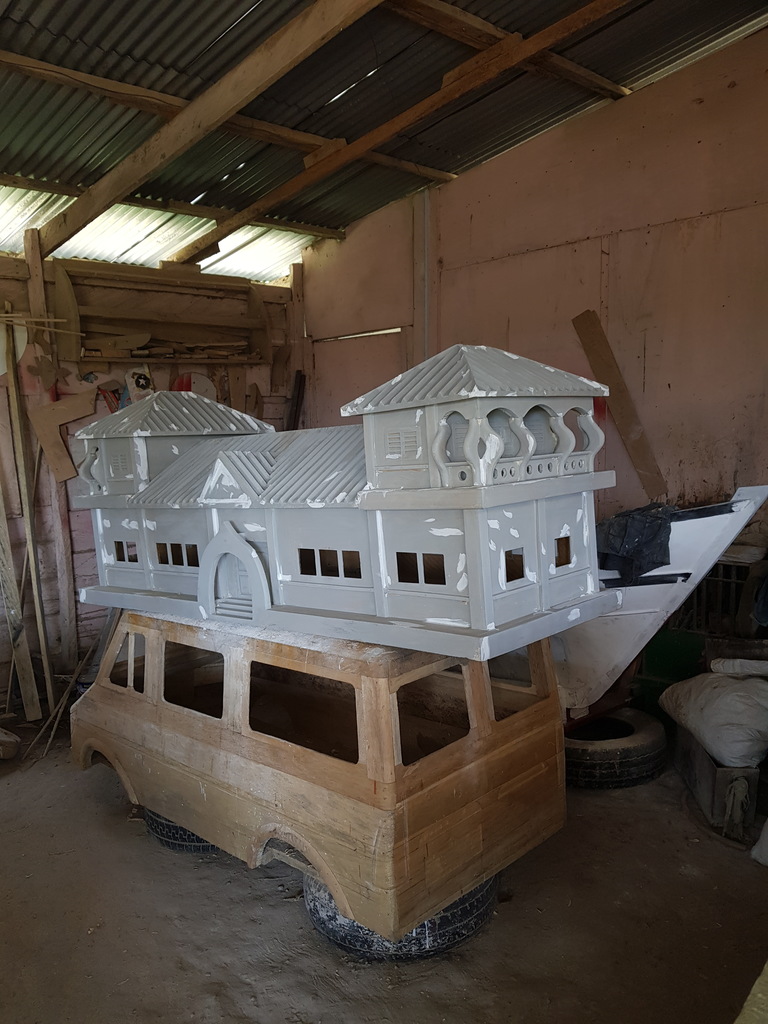 A casket in progress

Both bodies were returned through the door of no return at Cape Coast, retracing the steps back to Assin Manso.  The market serves as a sort of pilgrimage site for people from the diaspora.   A memorial wall of return has been erected for visitors to write their names, indelibly marking their return.

The Kakum national park is a “must visit”. It features a gentle forest hike and heart-stopping treetop rope bridge tour that reminds you to revere nature, as well as an option for an overnight camping trip in a tree house.  The latter is said to offer a better opportunity to spot major wildlife as they are more likely to come out when it's quiet.

Another must-see is the Kente craft village in Bonwire where you can try your hand at a traditional loom before figuring out what you can leave behind in Ghana to make space in your luggage for authentic Kente cloth. Lots more shopping bargains are also available at the Arts Centre (Centre for National Culture) in Accra where the art of haggling, patience, and cool clothing are important to make it through the experience.

A sense of home

In most cases that “sense of home” you can experience in a new place is just a sense of comfort. In Ghana, you could literally see yourself reflected in the faces of strangers. A friend who lived there for several years said at first, he kept asking people where he knew them from until he accepted that these people were literally his “tribe” and shared similar features.

It came to a head when someone asked why he was ignoring them, and it turned out that person really was another Trinidadian visiting the country. In my case, a visit to a funeral repast for a relative of my driver introduced me to his distant cousins, two who looked exactly like my paternal aunts, one of whom, according to my father, positioned her arm “just like” his sister!

In Accra, the capital, I had a moment of unease when my tour guide told me that my hotel was in a hot spot. I gently explained to him that where I come from hotspot carries a different connotation.

According to Time Out, an online travel and culture magazine, Oxford St is " a hub of activity 24/7 probably the busiest street in Accra, it's the site of bars, clubs, restaurants and boutique shops". 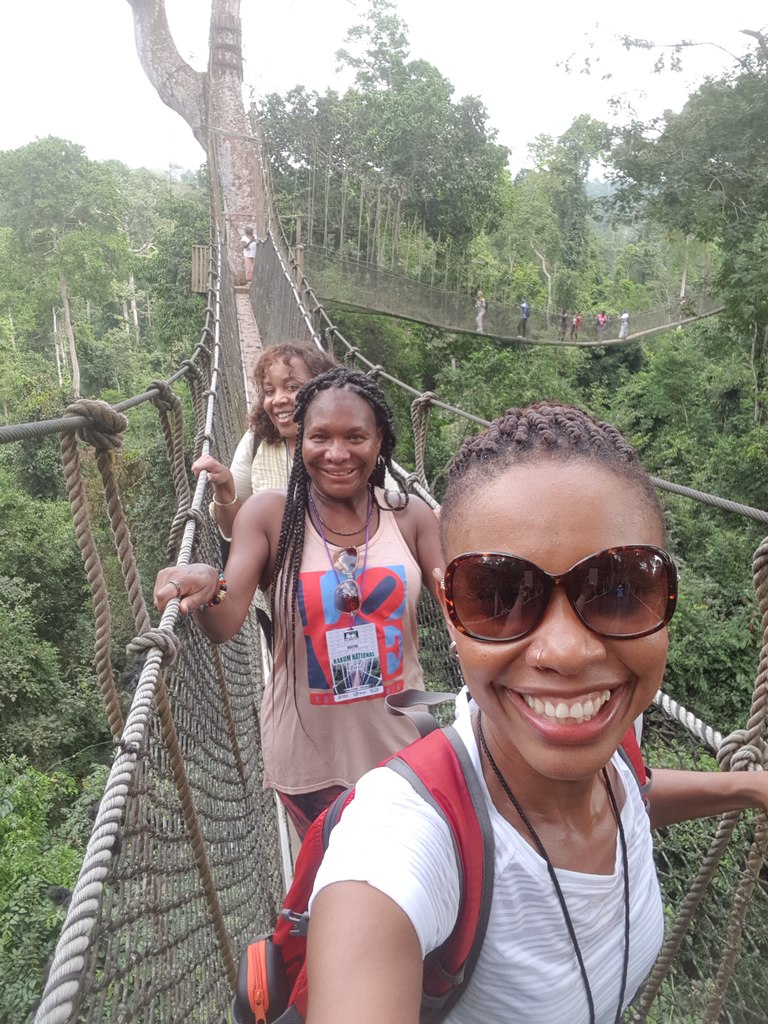 Annabelle Brasnell on the rope bridge

They did acknowledge the lack of "sights” though. The energy is akin to Charlotte Street in Port-of-Spain with the clothes and street hawkers (one man carried unpackaged chunks of smoked fish on an open tray)  but with open box drains and no sidewalk.

There is obviously poverty here, the preponderance of street vendors competing to sell the same products in the same space (bread, sweets, drinks, detergent, linens, boiled eggs, nuts…) is just one clue, but as seen in that day’s business paper, in some areas they have bested many islands in the Caribbean.

Mobile money technology is widely accepted and since 2013, 1BGH¢ in transactions have been processed; improvements to protect and improve the local fashion industry are occupying state attention and; and a locally developed software programme is making educational materials available to all schools whether they have internet or not.

For foodies, Ghanaian food can be comfortingly familiar—fried plantain and yam are ubiquitous—yet intriguing, as with Banku and stew. Banku is a steamed, fermented corn dough served in the shape of a ball. Simply pull off a piece of the ball and scoop up your stew – fish, beef, goat or ochre—much like you would with buss-up-shut.

Red red, a dish of black eye peas and fried plantain, both cooked in red palm oil, is deliciously simple and calls for seconds. Options are endless but, as with anywhere, be wary of street food unless you know you have a strong constitution.

Ghana’s funeral culture is a fascinating lesson in honoring and celebrating those who have passed on. Its fashion, rituals and casket art have been featured in the international press, scholastic and fashion research papers.

The unique caskets that feature on the shoulders of dancing pallbearers at many funerals are a final showcase of the key interests of the dead person, but it could have taken weeks, months and in some cases up to a year, to get the funeral.

The culmination of the final rites, which spans about three days, is largely reserved for weekends. Driving through the Ashanti region on a Saturday, most travelers were dressed in the traditional red and black patterned mourning fabric and red and black striped marquee tents with matching chairs dotted the landscape. 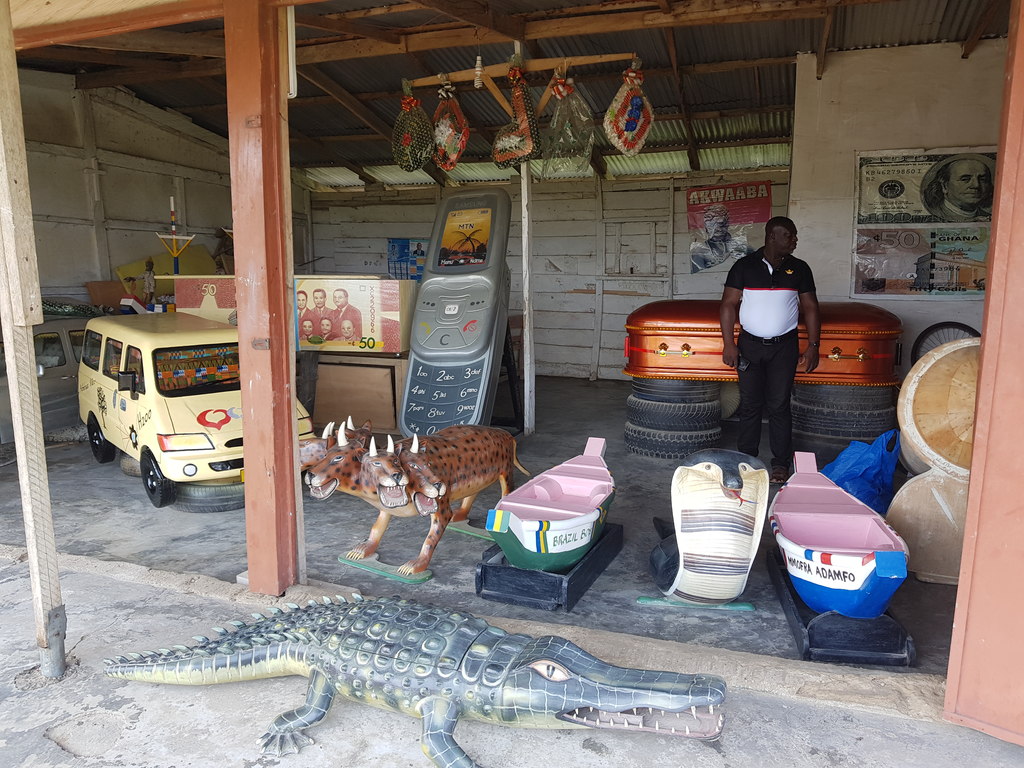 An array of caskets

On one 200 meter stretch, five different celebrations were in progress and on a recreation ground five families had come together to have a joint farewell. Given the high prices of funerals, joint rites help to manage costs, my driver, Albert said.  This is unsurprising, given the process for announcing a death includes any combination of radio and television ads, flyers and posters stuck on vehicle windscreens and massive roadside banners, not to mention hosting hundreds for several days, printing detailed programmes and constructing a custom wood or glass coffin.

Ghana offers a myriad of experiences, depending on your interests. The best approach to exploring this intriguing country is to plan well. In addition to the typical sites, look for off the beaten path options (donate some time to a charitable organisation?)  and make every moment count.

Ghana beckons the Caribbean with Year of Return festivities

Melania Trump walks through Ghana's 'Door of No Return'

Fake US embassy in Ghana operated for 10 years until caught