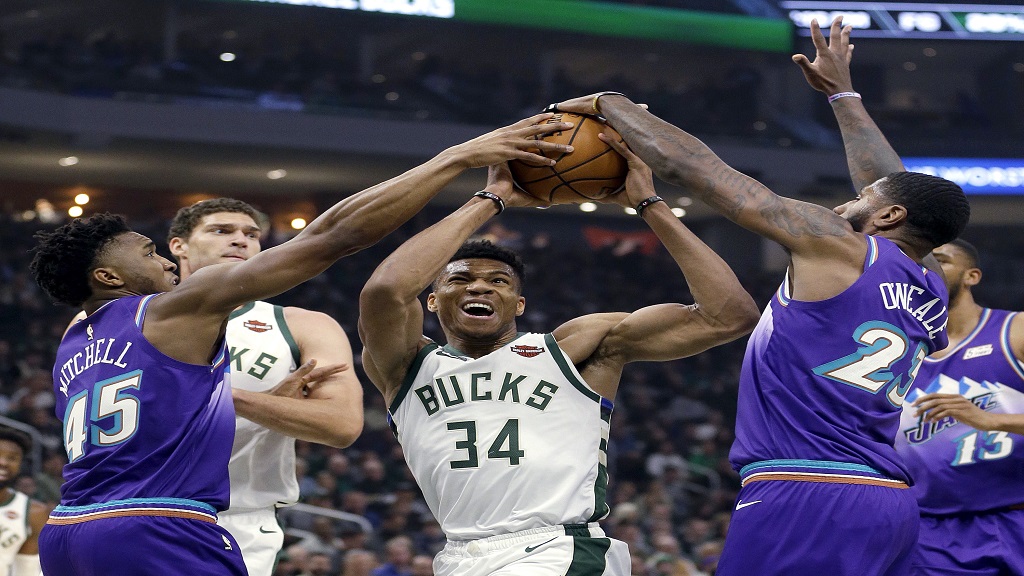 Milwaukee Bucks' Giannis Antetokounmpo (34) is fouled as he drives between Utah Jazz's Donovan Mitchell (45) and Royce O'Neale (23) during the first half of an NBA basketball game Monday, Nov. 25, 2019, in Milwaukee. (AP Photo/Aaron Gash).

Giannis Antetokounmpo scored a season-high 50 points and collected 14 rebounds as the Milwaukee Bucks beat the Utah Jazz 122-118 in NBA action on Monday.

It was Antetokounmpo's second 50-point game of his career, which helped extend Milwaukee's (14-3) winning streak to eight games.

LeBron James, meanwhile, put up 33 points and 14 assists to see the Los Angeles Lakers to a 114-104 victory at the San Antonio Spurs.

Anthony Davis added 19 points and 12 rebounds for the 15-2 Lakers, who own the best record in the league.

Buddy Hield had a career-high 41 points but the Sacramento Kings still lost 103-102 to the Boston Celtics, who were without Kemba Walker due to a neck sprain.

Bam Adebayo had his ninth double-double of the season courtesy of 21 points and 13 rebounds as the Miami Heat defeated the Charlotte Hornets 117-100 to remain undefeated at home.

Carmelo Anthony moved into 18th place on the NBA's career scoring list. The veteran finished with 25 points in the Portland Trail Blazers' 117-94 win against the Chicago Bulls.

The Minnesota Timberwolves triumphed 125-113 over the Atlanta Hawks thanks to Karl-Anthony Towns' 28 points and 13 rebounds.

Joel Embiid was held scoreless for the first time in his career after the Philadelphia 76ers went down 101-96 to the Toronto Raptors. All-Star Embiid shot 0-for-11, missing all four of his shots from three-point range and going 0 of three from the free-throw line. He did, however, manage a game-high 13 rebounds.

Playing in the absence of Kyrie Irving, Spencer Dinwiddie hit a fadeaway jumper with 1.9 seconds remaining to lift the Brooklyn Nets past the Cleveland Cavaliers 108-106.

There will be plenty of star quality on show when the Los Angeles Clippers visit the Dallas Mavericks on Tuesday. Kawhi Leonard and Paul George travel to Dallas riding a five-game winning streak. Led by the red-hot Luka Doncic, the Mavs have also won five straight.