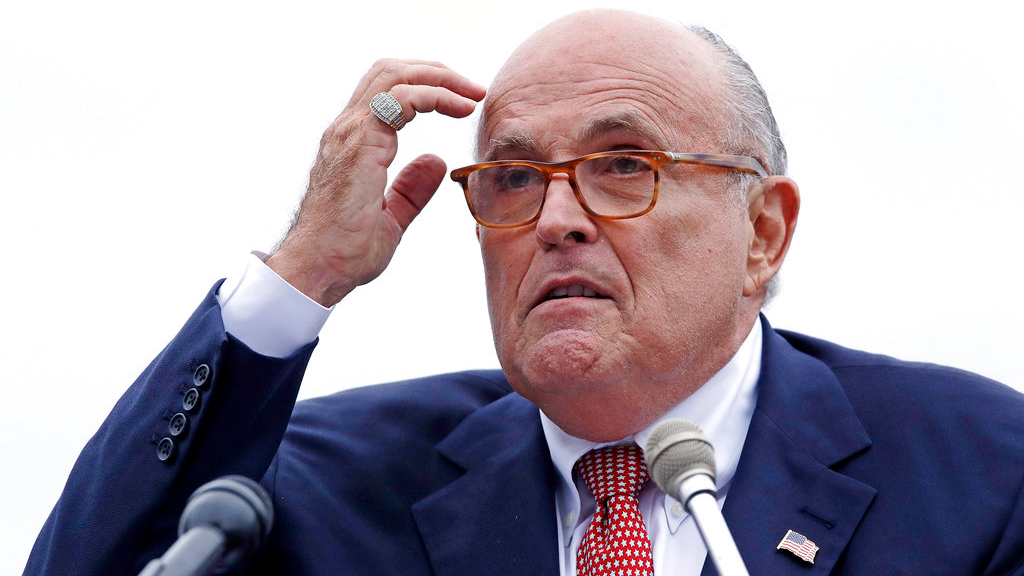 President Donald Trump will not answer federal investigators' questions, in writing or in person, about whether he tried to block the probe into Russian interference in the 2016 election, one of the president's attorneys said on Thursday.

Trump lawyer Rudy Giuliani said questions about obstruction of justice were a "no-go."

Giuliani's statement was the most definitive rejection yet of special counsel Robert Mueller's efforts to interview the president about any efforts to obstruct the investigation into possible coordination between his campaign and Russians. It signals the Trump's lawyers are committed to protecting the president from answering questions about actions the president took in office.

It's unclear if Giuliani's public position has been endorsed by Trump, who has said he wants to answer questions under oath. Negotiations about the scope and format of an interview are still ongoing. If the legal team holds its stance, it could force Mueller to try to subpoena the president, likely triggering a standoff that would lead to the Supreme Court.

Mueller's office has previously sought to interview the president about the obstruction issue, including his firing last year of former FBI Director James Comey and his public attacks on Attorney General Jeff Sessions. Trump's legal team has argued that the president has the power to hire and fire appointees and the special counsel does not have the authority to ask him to explain those decisions. Giuliani said Thursday the team was steadfast in that position.

"That's a no-go. That is not going to happen," Giuliani said. "There will be no questions at all on obstruction."

In a letter last week, Mueller's team said it would accept written responses from Trump on questions related to Russian election interference. Giuliani suggested Thursday that Trump's lawyers had agreed to those terms but wanted to prohibit investigators from asking follow-up questions.

"It would be in written form and if you want to follow up on our answers, justify it. Show us why you didn't get there the first time," Giuliani said. He said he was not categorically ruling out answering a second round of questions but the entire matter of whether there would be follow-up inquiries should be settled before the president answers anything at all.

"We aren't going to let them spring it on us," said Giuliani, who has served as lawyer-spokesman for the president's personal legal team, using television interviews and public comments as a tactic in the negotiations.

He has repeatedly moved the goalposts on what would be required for a presidential interview and, at times, has been forced to clarify previous statements. In earlier interviews, Giuliani had suggested some obstruction questions could be allowed if prosecutors show necessity and preview the questions with the defense lawyers.

Trump, in a Fox News interview taped ahead of a Thursday night rally in Montana, was noncommittal when asked about a possible Mueller interview.

In the latest letter to the legal team, Mueller's office didn't address obstruction questions, indicating investigators would later assess what additional information it needs from the president after receiving a response about the written submissions, according to a person familiar with the document.

The person familiar with the letter spoke on condition of anonymity because the person was not authorized to publicly discuss the negotiations.

Giuliani's declaration drew a swift rebuke from Rep. Adam Schiff, the highest-ranking Democrat on the House Intelligence Committee, who tweeted: "Trump's legal team never had any intention of allowing him to be interviewed, knowing he is incapable of telling the truth. It's past time to subpoena the President. No one is above the law."

Though the president has publicly said he was eager to face questions from Mueller, his lawyers have been far more reluctant to make him available for an interview and have questioned whether Mueller has the right to ask him about actions that he is authorized, under the Constitution, to take as president. Giuliani's comments came just hours after Trump's Supreme Court nominee, Brett Kavanaugh, espoused a belief in an expansive view of executive powers and declined to say whether a president can be subpoenaed and forced to testify.

Mueller's team raised the prospect in March that it could subpoena the president, though this would unquestionably prompt a court fight.

The Supreme Court has never definitively ruled on the question of whether a president can be forced to testify, though the justices did rule in 1974 that Richard Nixon had to produce recordings and documents that had been subpoenaed.

In addition to questions about Comey and Sessions, Mueller has expressed interest in Trump's role in drafting a statement to The New York Times about a June 2016 meeting at Trump Tower attended by his son, Donald Trump Jr., and a Russian lawyer.

Trump Jr. took the meeting, emails show, after it was described as part of a Russian government effort to help his father's campaign by providing derogatory information about Democrat Hillary Clinton.

Trump has said he knew nothing about the meeting before it happened.

Trump and Giuliani have led an onslaught of attacks on Mueller's credibility, claiming that the special counsel was biased and that the entire probe was a "witch hunt." Giuliani has also demanded that the probe suspend its activities with the midterm elections approaching, but the former mayor said Thursday he was not certain of Mueller's intentions.