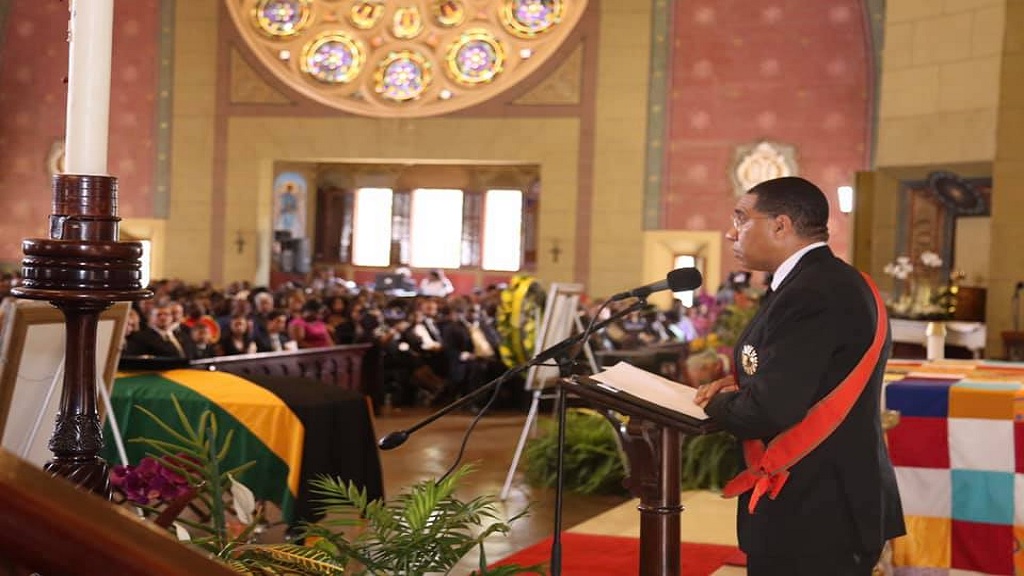 The life of former Prime Minister Edward Phillip George Seaga was colourfully remembered in tributes and songs at a state funeral service at the Holy Trinity Cathedral in Kingston on Sunday.

Dignitaries from Jamaica and across the Caribbean descended on the venue giving glowing tributes to Seaga, who was Prime Minister of Jamaica from 1980 to 1989 and led the Jamaica Labour Party from 1974 until 2005.

All said that Seaga was misunderstood by his outward persona, as they shared the softer side of the former prime minister they got to know outside of the political spotlight.

According to Mitchell, Grenadians are grateful for Seaga's role in the 1983 invasion of Grenada that toppled the government of Marxist revolutionary Maurice Bishop which had overthrown elected officials in a coup.

Mitchell said Seaga's support for Grenada was epitomised by his attendance of the official ceremony for the elected government in 1984 after the invasion and he remained a friend of the country until his death.

Patterson said that, while they were political rivals, Seaga was a 'titanic warrior' who had the will to succeed at whatever he did. He said Jamaicans should put aside political divisions to applaud Seaga's "monumental contribution" to Jamaica.

He hailed Seaga's contribution to sports, culture and music, the latter of which he said Seaga helped by developing the indigenous art form of the country.

Holness said that Seaga recruited him to the JLP while he was still a student at the University of the West Indies. He said that during that time, he learned of Seaga's pragmatic approach to development and economic policies as a visionary and big thinker.

He gave anecdotal interactions with Seaga and said that the former prime minister was contradictory at times, as while he was portrayed as a capitalist, he never lost sight of his political mission of helping the poor to join the ranks of the wealthy.

In his tribute, Metry said that while Seaga was arguably be the best finance minister that Jamaica has ever had, the late former prime minister was unable to balance his family books, because of his love for Jamaica. He said Seaga's immediate family suffered as a result of his dedication to Jamaica and Jamaicans who owe a debt of gratitude to them.

McKenzie, who is also the Minister of Local Government, was accompanied to the podium by Minister of Culture, Gender, Entertainment and Sports, Olivia 'Babsy' Grange along with Dawn Heron and Charmaine Anderson. He said they were all assisted to be successful in life by Seaga.

McKenzie painted Seaga as the godfather of West Kingston who transformed the community and the lives of those who lived there towards the better.

The Rt Reverend Robert Thompson did the homily, highlighting that Seaga's love for humanity endeared him to the poor of the nation.

Seaga died on his birthday on May 28 in Miami, Florida.