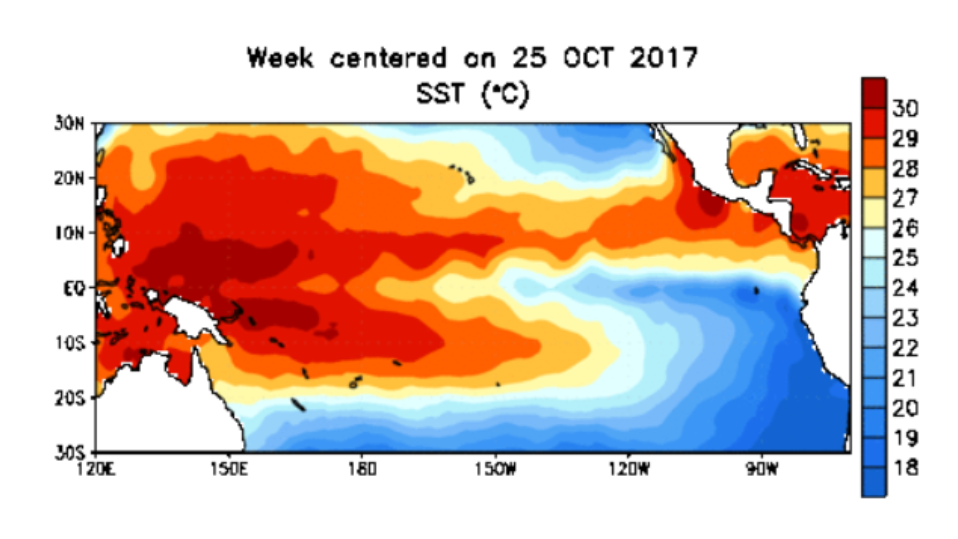 There’s a good chance for the development of La Niña during the course of the month until January 2018.

The Meteorological Service (Met Office) made the observation in its El Niño-Southern Oscillation (ENSO) Watch update, in which it maintained its La Niña Watch.

At the end of October, the equatorial Pacific Ocean remained in an ENSO-neutral (El Niño-Southern Oscillation) state and the most recent sea surface temperature (SST) anomaly of -0.5 ⁰C was borderline of weak La Niña.

At the same time, related atmospheric variables, including the upper and lower level wind anomalies have shown patterns indicative of near-La Niña.

During the last two months, negative subsurface temperature anomalies have expanded across the Pacific Ocean.

The multi-model averages from the majority of ENSO predicting models favour La Niña between 55 and 65 percent forming in late 2017 and to persist into the start of the 2018 dry season.

Consequently, the Meteorological Services Division ENSO Monitor remains at La Niña watch. In the event La Niña develops, it is likely to be weak and short lived.

Historically, La Niña condition during the local wet season has often shown some association with wetter and cooler conditions across Trinidad and Tobago, but this is not always the case.

El Niño or La Niña conditions are considered to be present when the monthly Niño3.4 SST departures meet or exceed more or less than 0.5⁰C, along with associated changes in atmospheric features.