Google's phones and other gadgets have had a bumpy ride 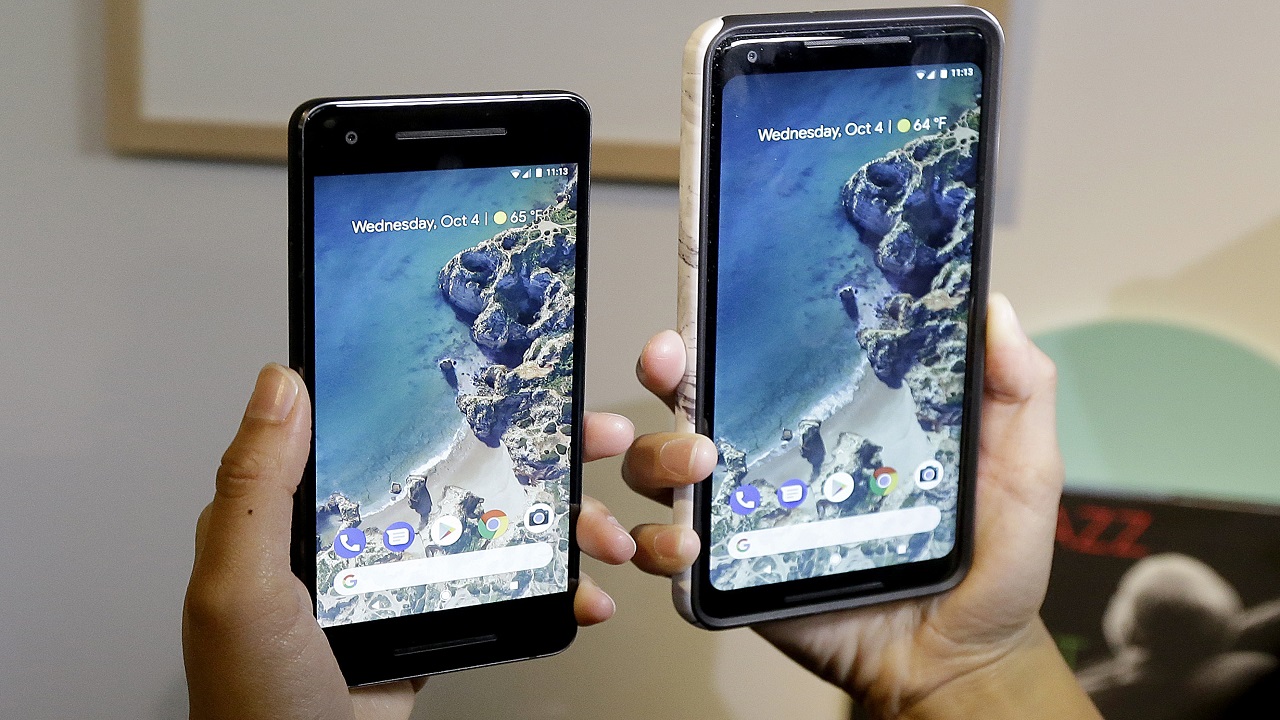 In this Wednesday, Oct. 4, 2017, file photo, a woman holds up the Google Pixel 2 phone, left, next to the Pixel 2 XL phone at a Google event at the SFJAZZ Center in San Francisco.

Google, which prides itself on developing simple, intuitive software that seems to know what you want almost before you do, is finding itself in a very different world when it comes to its own phones and other gadgets.

Its new Pixel 2 phones, released in October, got high marks for their camera and design — at least until some users complained about "burned in" afterimages on their screens, a bluish tint, periodic clicking sounds and occasionally unresponsive touch commands.

Then the company's new Home Mini smart speaker was caught always listening. Finally, its wireless "Pixel Buds" headset received savagereviews for a cheap look and feel, mediocre sound quality, and being difficult to set up and confusing to use.

In short, Google is re-learning an old adage in the technology business: Hardware is hard.

Google quickly extended the warranty on the Pixel 2 and tweaked software on the devices and its Home Mini in an attempt to fix the troublesome issues. (It hasn't had much to say about the Pixel Buds.) Still, the problems served as a high-profile reminder of the company's inexperience in making consumer electronics — a field where Apple has a 40-year head start.

But the company insists that its problems are being blown out of proportion.

"I believe, quite frankly, that Google has a spotlight on it," Rick Osterloh, the executive in charge of the company's hardware division, said in an interview with The Associated Press. "Things that would normally be pretty minor issues are a bit amplified in today's environment."

Of course, Google has actively courted this spotlight. In 2016, Osterloh took the stage at a product event to tout the Pixel phone as "the best of hardware and software, designed and built by Google." The company is also currently running a major ad campaign to draw attention to its gizmos for the holiday shopping season.

"Being a software company is an entirely different animal from being a hardware company," said technology analyst Jan Dawson of Jackdaw Research. "The cultures are very different and there are more moving parts in hardware, so you have to learn along the way."

Google has to realize a "fail fast" philosophy that worked well for free software products doesn't work as well for smartphones that cost hundreds of dollars, said analyst Ross Rubin of Reticle Research.

Software "can be more forgiving of that development philosophy," he said. "You can't do that with atoms. You risk some backlash."

Google's push into devices, which includes its own Wi-Fi routers and an older line of web-based notebook computers, has become a key strategy for the internet giant. It sees these gadgets as a way to ensure services such as search, maps, Gmail, and its voice-activated assistant remain prominent as personal computing expands on mobile devices and new smart gizmos in homes.

All those Google services are baked into Android, which powers more than 2 billion devices worldwide — but device makers such as Samsung that use the free software also can make adjustments to highlight their own products instead. And Apple only uses Google's search engine as a built-in service on iPhones, and that's only because Google pays billions of dollars annually for the access.

The Pixel phones and Home speakers also serve as a showcase and data-collection tool for the Google Assistant, its voice-activated digital concierge. The virtual assistant is key to Google's artificial-intelligence efforts, aimed at making computers that constantly learn new things and eventually seem more human than machine.

The Pixels, however, got off to a slow start. Google sold only 2.8 million of the first-generation model, accounting for about 0.1 percent of the market, according to the research firm International Data Corp.

Such a low sales volume makes it more difficult to acquire the highest-quality components for hardware, particularly when suppliers make it a priority to meet the demands of market leaders Apple and Samsung.

Apple is expected to sell between 230 million and 250 million iPhones during the fiscal year ending in September.

Like the Pixel 2s, the new iPhone X features an OLED screen to display more vibrant colors. And like the Pixel 2 XL, the iPhone X's screen may also display a bluish tint and suffer "image retention" that makes it look like something has burned into the screen, by Apple's own admission.

As part of its effort to catch up to Apple and Samsung, Google recently acquired more expertise in a $1.1 billion deal with device maker HTC that included the brought in 2,000 more smartphone engineers and certain hardware technologies.

But Edison Investment Research analyst Richard Windsor believes many consumers will balk at paying a premium price for the Pixel 2 (prices start at $650), given its troubles. "It appears that the best way to get the most value from Google services is still to use them on another device," Windsor said.

Google buys HTC's Pixel team in $1.1B bet on devices

EU hits Google with $2.7B fine for abusing weaker rivals