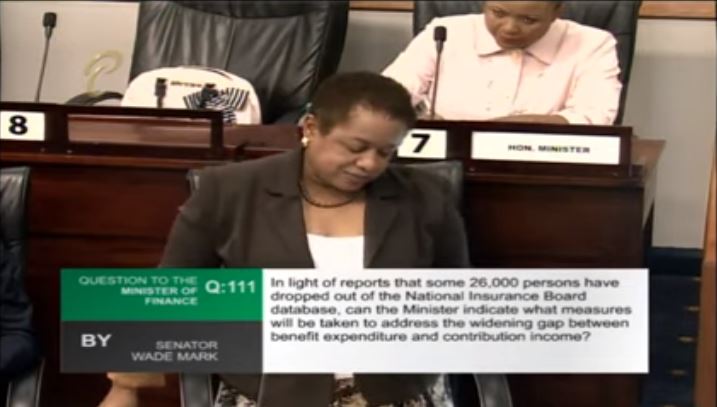 Minister in the Ministry of Finance, Allyson West, speaking in the Senate on Tuesday, April 30.

Consultations are underway to possibly increase NIS contributions and raise the retirement age from 60 to 65.

That's according to Minister in the Ministry of Finance, Allyson West, who was speaking in the Senate on Tuesday.

She was responding to concerns raised by Opposition Senator Wade Mark on the gap between NIS benefits expenditure and contribution income.

West explained that recommendations have been made in the ninth actuarial report, in an effort to close the gap. The actuarial report takes into account the increasing levels of wages of the insured population, as well as the relevance of the levels of benefits paid.

- Increases in the contribution rate

- And adjustments to the retirement age over a gradual period of time."

The Minister in the Ministry of Finance said these major reforms require considerable public sensitisation and national dialogue to determine the way forward.

She noted that in July 2016, legislative amendments allowed the National Insurance Board to increase the contribution rate from 12 percent to 13.2 percent as an immediate short-term recommendation.

"This measure positively impacted the National Insurance Board in the short term, but a longer-term solution is required," she said.

According to West, since receipt of the ninth actuarial review in 2014, the NIB has met with all major stakeholder groups representing the business and labour sectors, hosted seminars and appeared on radio and television to educate the general population on the need to reform the NIS. She said the dialogue will continue.

Meanwhile, West responded to concerns that in June 2017, the NIB revealed that over 26,000 people were no longer contributing to NIS. She said the figures represent unemployment and employment based on NIS payments to the government.

“The persons who contribute and on whose behalf contributions are made to NIS are persons employed so that as persons cease to be employed or as persons come on the roll, the numbers before the NIS will change.”

She further noted that talks about possibly increasing the retirement age will continue.

Meanwhile, the Minister revealed that cultural shifts in Trinidad and Tobago is mainly responsible for the disparity between pensions owed to citizens and the number of persons contributing to the fund. She said these cultural changes include the ageing population, a growing number of persons qualifying for pension due to increasing life expectancy, historical declines in fertility rates and changes in the macro-economic environment.

She also issued a warning to business owners that fail to make NIS contributions on behalf of their employees.

"Employers who are in breach of the law by their non-payment of NIS contributions on behalf of their employees will remain a key focus of the insurance board."