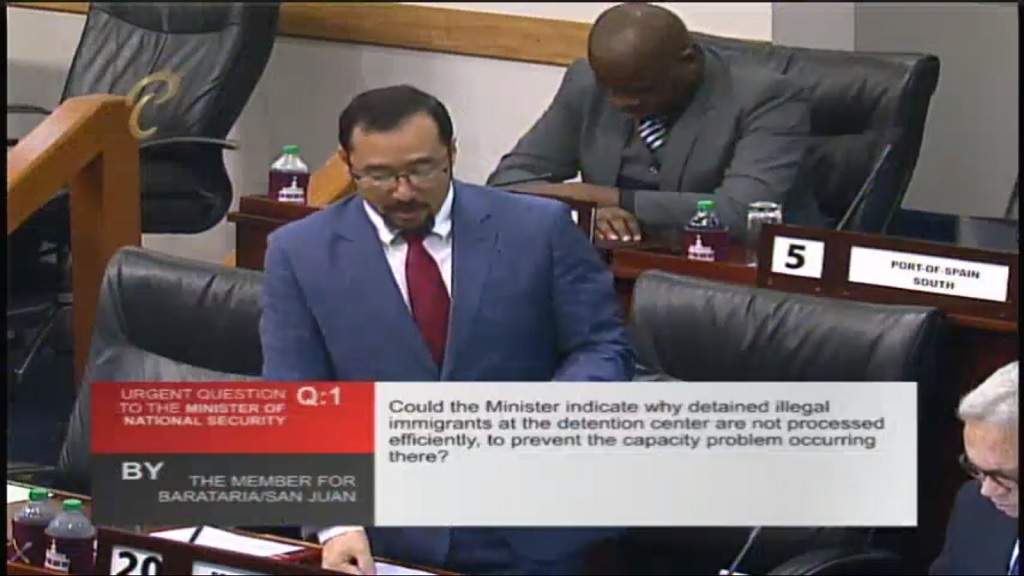 Minister of National Security Stuart Young said a policy is currently being prepared for review by Cabinet, which would allow Venezuelans in Trinidad and Tobago to be registered to work for up to one year.

Speaking in Parliament on Friday in response to an urgent question raised by San Juan MP Fuad Khan, Young said a policy involving the registration of Venezuelan nationals in Trinidad and Tobago, and the ability to work, is being prepared and would be presented before Cabinet.

“I intend to take to Cabinet very shortly and the Prime Minister has spoken about it, as have I, a policy for us to adopt as a Cabinet and to try and persuade my colleagues that all of the Venezuelans here, as a first step, they need to be registered, and in that registration process part of it would be what work they can do etc.

"Once all Venezuelans are registered here, whether illegally or legally, it would give us data as to how many are here…and then we’ll take further decisions that might very well include allowing them to work for the period of a year.

“And thereafter anyone who is held here illegally we will deal with them in accordance with the current law,” he said.

Young said due to the diligence of the country's national security agencies, there has been a rise in the number of non-nationals being detained for illegal entry.

He was responding to questions regarding inefficient processing of non-nationals at the Immigration Detention Centre (IDC) in Parliament on Friday.

However, under the 1951 Refugee Convention, non-nationals arriving illegally from countries of turmoil, such as Venezuela, should not be detained or persecuted for illegal entry.

Young praised the Trinidad and Tobago Police Service (TTPS) and other national security agencies for the increase in the number of detentions.

“It is wholly incorrect to suggest that the detained illegal immigrants at the detention centre are not being processed efficiently, and that is what has caused the capacity problem occurring there.

“In fact what has caused it has been an increase, there was an increase in the number of illegal immigrants, but also in addition to that, that has been coupled with the increased efficiency of our border security and also the immigration officers in Trinidad and Tobago Police Service in picking up more of these persons who are already within our borders, who are here illegally, so I’d like to commend the Trinidad and Tobago Police Service (TTPS), the Trinidad and Tobago Coast Guard, the men and women of the Immigration Division for the efficient work that they’re doing.

“One of the consequences of this efficiency is they’ve held more people in the detention centre,” he said.

Dr Rowley said government is discussing the introduction of identification cards for refugees and asylum seekers as well as measures which would allow them to work and attend school.

What is an asylum seeker?

According to Amnesty International, an asylum seeker is an individual who is seeking international protection.

In countries with individualised procedures, an asylum seeker is someone whose claim has not yet been finally decided on by the country in which he or she has submitted it. Not every asylum seeker will ultimately be recognised as a refugee, but every refugee is initially an asylum seeker.

A refugee is a person who has fled their country of origin and is unable or unwilling to return because of a well-founded fear of being persecuted because of their race, religion, nationality, membership of a particular social group or political opinion.

Trinidad and Tobago is a signatory to the 1951 Refugee Convention which mandates non-refoulement, a core principle of international refugee law that prohibits States from returning refugees in any manner whatsoever to countries or territories in which their lives or freedom may be threatened.

The principle of non-refoulement is a part of customary international law and is therefore binding on all States, whether or not they are parties to the 1951 Convention.