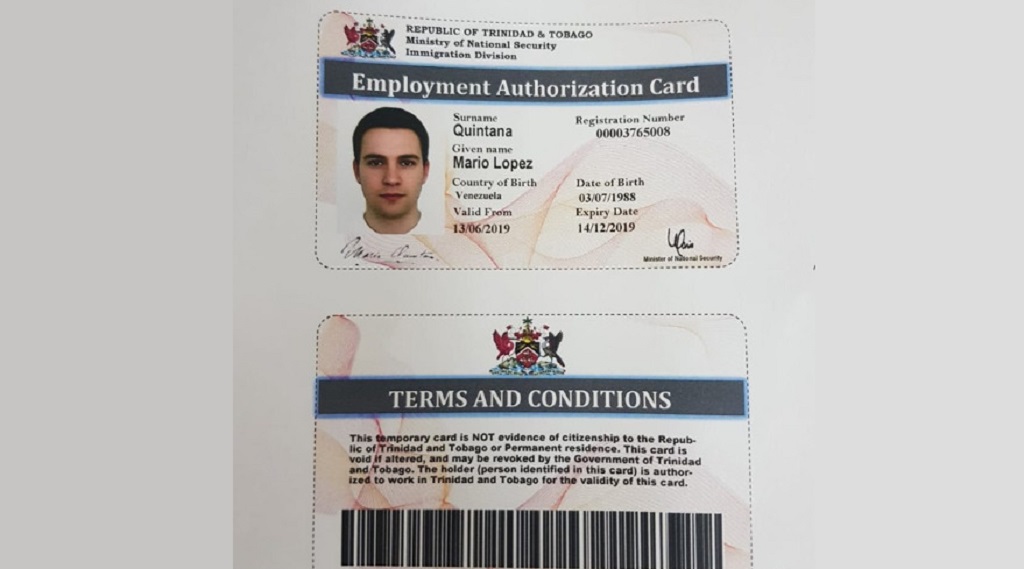 Government said an image shared online of what appeared to be a draft version of the new Venezuelan identification card was not the approved version.

Speaking at Wednesday’s post-cabinet briefing, Minister in the Ministry of the Attorney General and Legal Affairs, Fitzgerald Hinds, sitting in for National Security Minister Stuart Young, said the version spotted on social media was one of the ‘earlier mock-up versions’, however security has since been tightened to prevent any other leaks.

Hinds was speaking on the Venezuelan Migrant Registration Process, which takes place from May 31- June 14 (with the exception of June 5).

“The cards that are going to be issued to those who are registered have not yet been produced.”

“That, truthfully, I am told was one of the earlier mock-up versions…I can give you the assurance on the basis of information from the Immigration Department that that is not the final card, it does not even resemble what will be the final card which is yet to…be approved by the Minister of National Security,” he said.

“It is a disturbing feature (that the mock-up was leaked) but since then stricter arrangements have been put in place…to ensure that that is not replicated,” he said.

Acting Prime Minister Colm Imbert added that he has not yet seen the final version of the card but there would be security features to prevent the cards being duplicated.

“The registration process will not guarantee that a card would be issued, it is at the discretion of the immigration department. That card would have security features…to ensure that it is not replicated,” Hinds said.

Hinds added that the cards will not be given to registrants immediately as the requisite checks need to be done first.

“We have to verify the information we get and therefore the cards would not be given immediately but they would be given as soon as practically (possible).”

He said in the meantime until the cards are issued, registrants would be given a receipt which they can show to the authorities as proof that they completed the registration process.

Imbert said the National Security Ministry has instructions to produce the cards in the ‘soonest possible time’, adding that if all goes to plan, the first batch of registrants would get their identification cards by the end of the registration period (June 14, 2019).

Hinds said that anyone who provides false information to the authorities would be penalised.

Imbert: No need for fear

Imbert also refuted claims by some naysayers that the registration exercise is a ploy to persecute Venezuelans.

“It’s most certainly not a trick or a trap. It’s the opposite, we’re simply trying to legalise those who are illegal, there’s no trap here.”

“This is why we’ve put a seamless registration process in place. We have no need for fear, this can only bring benefit, this is Trinidad and Tobago, we’re giving you an opportunity to be here lawfully, there’s nothing to fear,” he said.

“We see what the situation is, we are compassionate, we are empathetic, we have relations with Venezuela and so we treat with them in a humane manner.”

“This is designed so that they can work…this will help protect them from human trafficking. And at the same time it gives us an idea of…what we are dealing with,” he said.

Imbert did not give details on whether there were Venezuelans with criminal records in Trinidad and Tobago but said the matter is one of concern.

“That’s a matter of national security, I can’t speak about it. But obviously, there are concerns,” he said.

Hinds noted that information provided by registrants would be cross-referenced with the Venezuelan government.

“We’ll have a system where we’ll be cross-referencing the information we have with the Venezuelan authorities,” he said.

The registration process for Venezuelans who are here legally or illegally who do not have relevant work permits will take place from May 31-June 14, with the exception of the Eid-ul-Fitr public holiday on June 5.

The registration venues will be located at:

Translators will be present to assist all registrants.