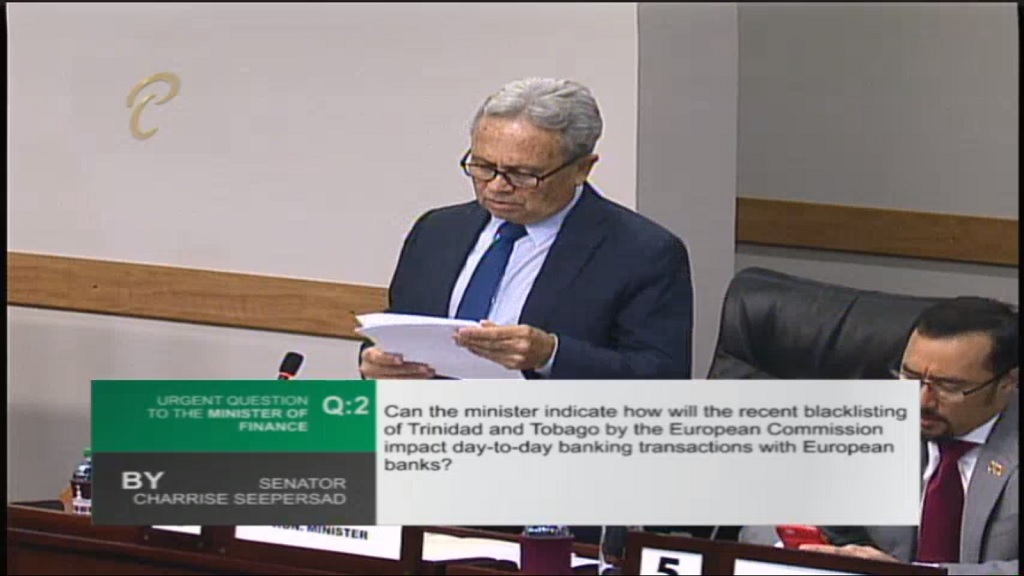 Photo: Finance Minister Colm Imbert discusses recent blacklisting by the European Commission for being a haven for money laundering and terror financing.

Finance Minister Colm Imbert said government stands with the US in rejecting the blacklisting of Trinidad and Tobago and American territories by the European Commission.

Speaking in Parliament on Tuesday in response to an urgent question, Imbert said the decision by the European Commission (EC) to blacklist the country as a haven for money laundering and possible terror financing was done arbitrarily.

“The US Treasury Department has schooled the European Union for including US territories on a list of tax havens or areas where there is money laundering around the world and has told American banks to ignore EU directives in a very unusual technocratic spat that shows continued friction between Washington and Brussels.”

“The Attorney General issued a statement on February 15 last week, and… we wholeheartedly agree with the analysis of the US which laid four compelling reasons for the rejection of the European Commission’s publication, namely:

"'First, the Commission’s process did not include a sufficiently in-depth review necessary to conduct an assessment related to such a serious and consequential issue.”

“’Second, the Commission provided affected jurisdictions with only a cursory basis for its determination.”

“’Third, the Commission notified affected jurisdictions that they would be included on the list only days before issuance.

“’Fourth, the Commission failed to provide affected jurisdictions with any meaningful opportunity to challenge the inclusion or otherwise address issues identified by the Commission’.”

“Those are the words of the US Treasury with which we wholeheartedly agree. The European Commission has arbitrarily and unilaterally included us and the US territories on this so-called blacklist. We do not agree.”

Mark then asked whether those objections were formally committed in writing to the EU to which Imbert responded that no impact on T&T-European bank transactions have been noted to date.

“We have no reports of any impact on Trinidad (and Tobago) banks on dealings with European banks at this point in time. We continue to monitor that situation. We do intend to communicate with the European Union and object in the strongest possible terms,” he said.

The European Commission said in a statement issued February 13, 2019, that it has adopted a new list of 23 jurisdictions with ‘weak anti-money laundering and terrorist financing regimes’.

The Commission said the countries assessed meet at least one of the following criteria: - they have systemic impact on the integrity of the EU financial system, they are reviewed by the International Monetary Fund as international offshore financial centres; or they have economic relevance and strong economic ties with the EU.