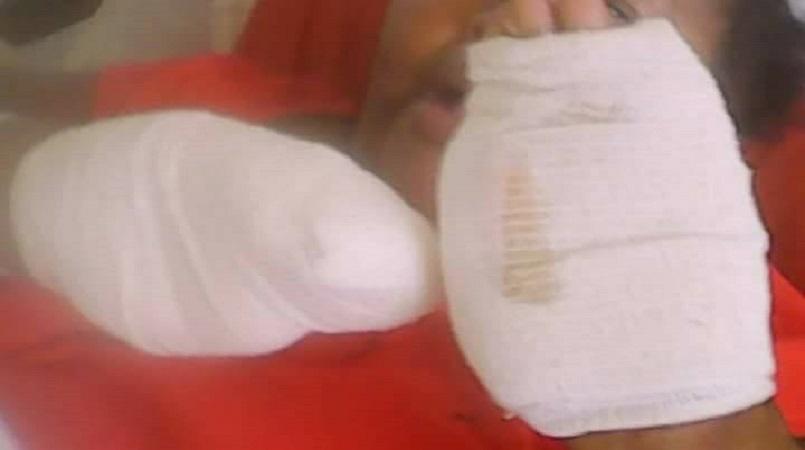 Chrystal Bute is calling for justice after her mother’s hands were horribly damaged by a scratch bomb which was tossed into their car.

Doctors are not sure whether she will ever have the use of her hands again as several fingers had been blown off.

Bute said the family was driving through Las Lomas on Divali night to view lights in the area, when they passed some men who were lighting scratch bombs and shooting them into the air.

In a terrifying instant, one of the scratch bombs actually flew into the car and landed next to a six-month-old baby girl.

Cuffie quickly grabbed the scratch bomb and tried to remove it, however, it exploded while still in her hands, badly burning her and causing extreme pain.

The woman, who is diabetic, was rushed to hospital where she is currently warded.

Bute is calling for those using fireworks illegally to be arrested and for those responsible to be charged.

“Tremendous damage has been done to her hands and the doctors are trying their best to see what can be done to save them.”

“I am calling on the authorities to please do something about these scratch bombs.”

“The people who are playing with these things are causing a lot of trouble to members of the public.”

“Please put a stop to the use of scratch bombs before more damage is done. Just look at my mom hands. She don't even know as yet if she can use her hands again,” the distraught woman said.

The family made a police report however she said she has not been contacted or received any updates since.

Citizens are joining in the cry for the authorities to crack down on illegal fireworks.

“This is ridiculous and sad. I am so angry reading this, because these things are illegal and yet still they are allowed to be sold and used in our country.”

“What would have happened to that child? Thank God for Jesus…don't leave that so, sue the government, they are the ones that are responsible for ensuring that laws are upheld. I am really upset and angry. Father spread forth healing hands over Sally and make her whole again.”

Another woman related a story of her own where she and her family narrowly escaped severe burns from a scratch bomb:

“It’s really sad how some ppl misuse these dangerous things... I empathize becuz my family n I too could have been a victim of these same bomb on divali night. We moved just in the nick of time... We were sitting minding our own business as we got up to go we saw a light fastly approaching the area we sat,. In awe n disbelief a bomb exploded right where we all sat... It would have been bad becuz it completely damaged an ac unit... I hate bombs n I think it should be banned or some strict level of control over it becuz its extremely dangerous.” (sic)

“There's a reason why these things are illegal - sale is illegal; sale to minors is illegal; importation is illegal; usage is illegal. But hey with every fool and their friends buying this crap, it's BIG business and we know whatagwan with that. This woman should be compensated as a victim of crime.” (sic)

Under Section 99 (1) of the Summary Offences Act (except as prescribed by Regulations under the Act) any person who throws, casts, sets fire to or lets off any fireworks within any town is liable to a fine of one thousand dollars.

Under S99 (2) of the Act, “Town” includes the City of Port-of-Spain, the City of San Fernando, and the Borough of Arima, and every part of the area within two miles of the boundaries of such City or of either of such Boroughs, and also any place or area declared by the Minister, by Order, to be a town or to be deemed to be included within a town for the purposes of the said sections.

Section 100 of the Act states: “Any person who throws, casts, sets fire to, or lets off any fireworks into, in, or upon any street not being in any town, or into, in, or upon any place being within sixty feet of the centre of any such street, is liable to a fine of four hundred dollars ($400)."

Under the Act fireworks refers to "bombs, torpedoes, squibs, rockets and serpents".