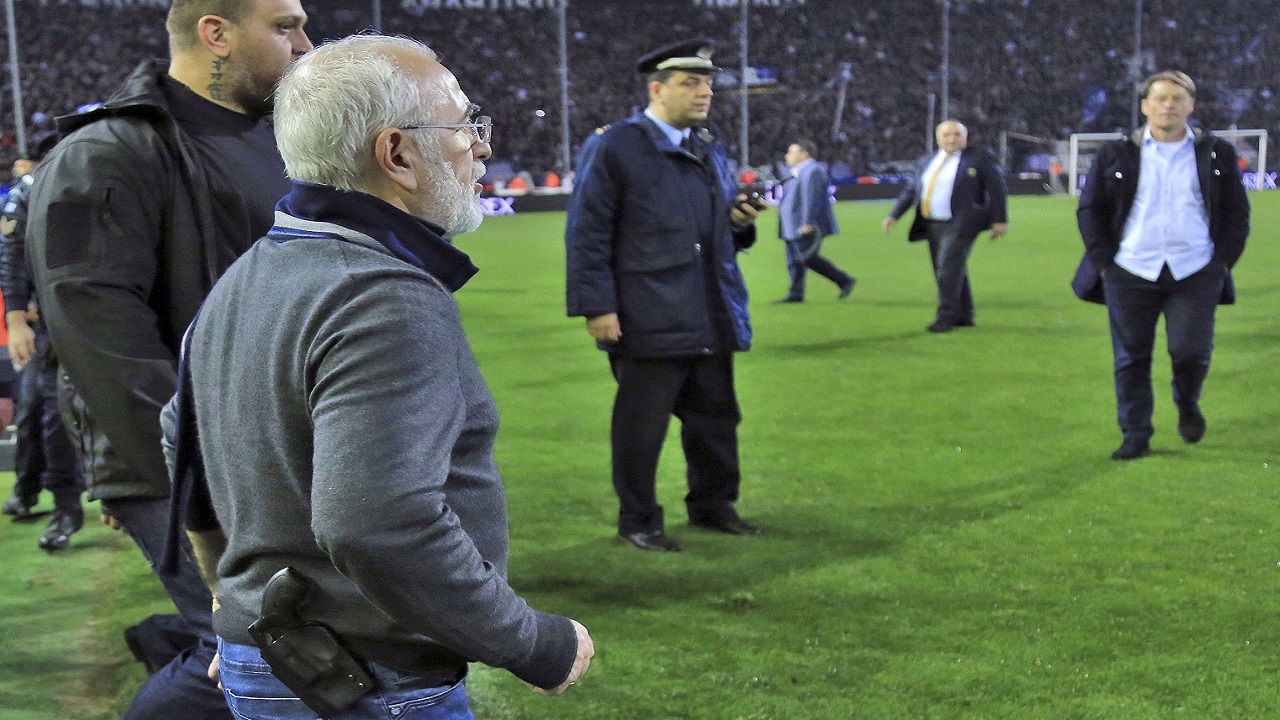 (Image: AP: PAOK owner Ivan Savvidis marches on to the pitch during the match on 11 March 2018)

Greece indefinitely suspended its football league on Monday, a day after the gun-toting owner of PAOK Thessaloniki marched onto the field following a disputed goal at the end of a match.

Giorgos Vasileiadis, the cabinet member in charge of sports, met Greece's prime minister and said league play was suspended, adding it would not restart "if there is not a new, clear framework agreed to by all so we can move forward with conditions and regulations".

PAOK owner Ivan Savvidis walked onto the field twice accompanied by bodyguards, and appeared to be carrying a pistol in a holster around his waist. He made no move to use the weapon at any time.

Fernando Varela had just scored in the 90th minute of Sunday's match between PAOK and AEK Athens, putting host the hosts ahead 1-0 in the northern city of Thessaloniki. The referee signaled a goal but then seemed to disallow it for offside. The match was eventually abandoned.

Greece has faced an unusually volatile league championship this season, with traditionally dominant Olympiakos — which has only failed to win the title twice in the past 21 years — currently in third place, behind leader AEK and PAOK.

Police said earlier on Monday they were investigating Savvidis, who holds a gun license, for illegal entry onto the field and for possession of an object that could cause harm in a sporting venue.

Tatyana Gordina, the deputy CEO in charge of corporate communications at Savvidis' Russia-based Agrocom Group, stressed Savvidis had not made any threatening gestures.

"There were no threats made by Ivan Savvidis, especially not involving the use of a weapon, during yesterday's match," she said. "There was an emotional walk out onto the field, probably a breach of sporting regulations, and nothing more. Most of the headlines in the Greek press exaggerate the facts."

Both FIFA and the European football governing body, UEFA, have criticised Savvidis' move.

Savvidis, who took over PAOK in 2012, is a Russian-Greek businessman born in Georgia during the Soviet era who made his money with the privatisation of a cigarette factory in southern Russia in the 1990s. His Agrocom company has extensive interests in tobacco, agriculture and real estate. He spent two terms in the Russian parliament between 2003 and 2011.