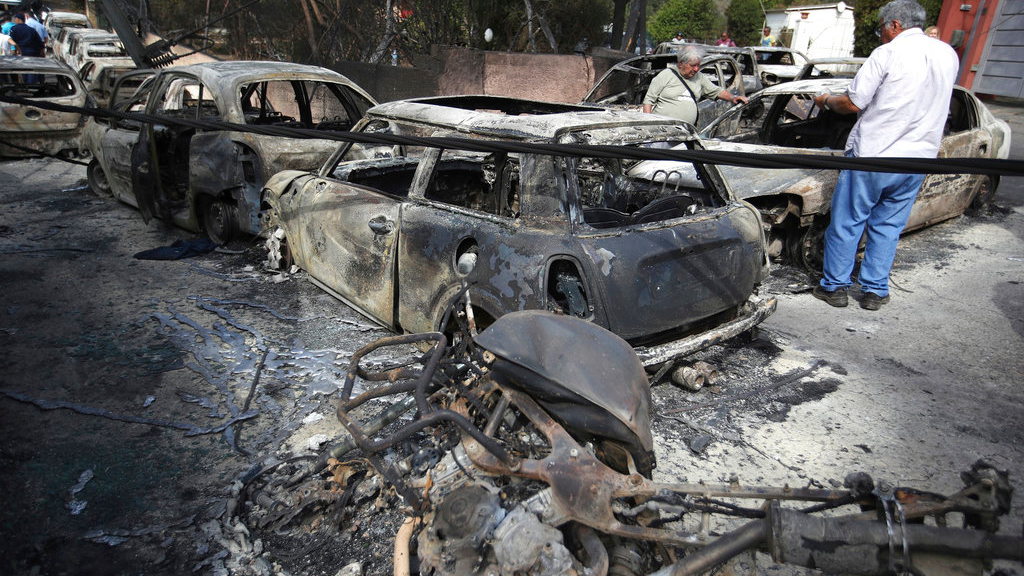 Wildfires raged through seaside resorts near the Greek capital, torching homes, cars and forests and killing at least 50 people, authorities said, raising the death toll Tuesday after finding 26 bodies believed to be family members huddled together, some of them hugging.

Many tourists and residents fled toward the coastline to escape the ferocious flames and choking smoke. Authorities evacuated more than 700 people by sea overnight, said Merchant Marine deputy minister Nektarios Santorinios, whose ministry is in charge of the coast guard.

But some didn't make it to the beach. The head of Greece's Red Cross, Nikos Oikonomopoulos, told Skai television that a Red Cross rescue team reported finding the 26 bodies in a compound northeast of Athens. In all, the death toll stood at 50 by Tuesday morning, government spokesman Dimitris Tzanakopoulos said.

"Everything happened in seconds," said Andreaas Passios, who lives next to the compound. "I grabbed a beach towel. It saved my life. I soaked it, grabbed my wife and we ran to the sea."

Passios said he and his wife stayed by the sea for two hours: "It was unbelievable. Gas canisters were exploding. Burning pine cones were flying everywhere."

When the flames died down, Spyros Hadjiandreou came searching for loved ones.

The two largest wildfires — one 30 kilometers (20 miles) northeast of Athens near Rafina, the other 50 kilometers (30 miles) west of the capital in Kineta — broke out Monday during hot, dry summer conditions. Fanned by gale-force winds that frequently changed direction, the flames spread rapidly into populated seaside towns — too fast for many who were in their cars or homes to flee, fire department spokeswoman Stavroula Malliri said.

"The police tried to direct us away from the fire, but we couldn't escape it," said Aleka Papariga, a former Greek Communist Party leader who lives near Rafina. "We got stuck in traffic and the flames were on top of us. We managed to find a small gap and we made it out."

"We were unlucky," he said. "The wind changed and it came at us with such force that it razed the coastal area in minutes."

Tzanakopoulos, the government spokesman, said 715 people were evacuated from beaches and coastline by navy vessels, yachts and fishing boats. The coast guard said 19 people were rescued at sea, some of whom had swum out to escape the flames.

Rafina's dock became a makeshift hospital during the night as paramedics checked survivors, some of them clad in only their bathing suits, emerging from coast guard vessels and private boats. The fire department said 156 adults and 16 children were hospitalized with injuries. Eleven of the adults were in serious condition.

In all, 47 brush and forest fires broke out across Greece Monday and early Tuesday, with most of them quickly extinguished, the fire department said. Ten were still burning late Tuesday morning, including blazes in Corinth, Crete, and in central and northern Greece.

More than 400 firefighters and volunteer firefighters were battling the two fires near Athens, supported by seven water-dropping helicopters and three aircraft.

It was the deadliest fire season to hit Greece in more than a decade. More than 60 people were killed in 2007 when huge fires swept across the southern Peloponnese region.

"It's a difficult night for Greece," Prime Minister Alexis Tsipras said late Monday after cutting short a trip to Bosnia and returning to Athens.

Showers that passed over the Greek capital Monday missed the two big fires, but heavy rain was forecast across southern Greece on Wednesday.

Forest fires are common in Greece during the hot, dry summers, and temperatures recently hit highs up to 40 degrees Celsius (104 Fahrenheit).