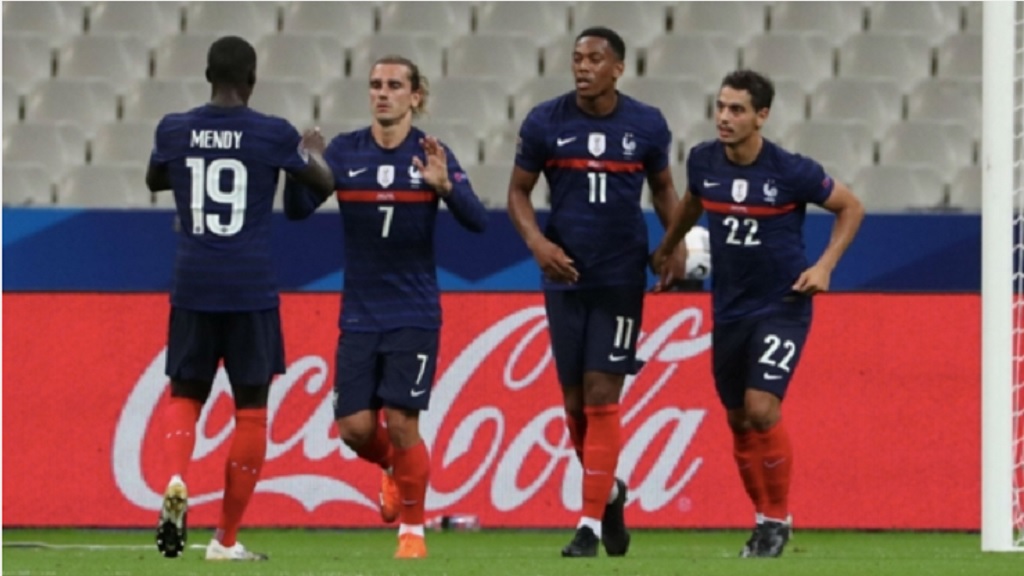 Antoine Griezmann scored one goal and set up another for defender Dayot Upamecano on Tuesday as France staged a repeat of the World Cup final by beating Croatia 4-2 in the Nations League.

Griezmann even passed up the chance to double his tally late on by allowing substitute Olivier Giroud to take a penalty for France’s fourth goal.

Giroud is just one goal behind Michel Platini's national record, while Upamecano's header was his first. The 21-year-old impressed at center half when Leipzig reached the Champions League semifinals, and headed in Griezmann's corner midway through the second half.

France have won both their games but trail Group 3 leader Portugal on goal difference. Cristiano Ronaldo scored both for Portugal in a 2-0 win at Sweden to reach 101 international goals.

Manchester United forward Anthony Martial had a hand in the other goals as France overcame a Croatia side which had taken the lead through Dejan Lovren's 17th-minute opener.

That goal game after a corner was swung over from the right and a headed clearance fell to Lovren on the left side of the penalty area. Lovren controlled the ball with his right foot as he cut inside a defender and then fired a shot into the opposite corner with his left.

Martial sprang into action in the 43rd, showing great footwork to combine with Wissam Ben Yedder on the edge of the penalty area before deftly setting up Griezmann’s close-range shot. It was Griezmann’s 31st international goal, moving him level with France great Zinedine Zidane, and a confidence boost considering last Saturday’s penalty miss in a 1-0 win away against Sweden.

Seconds before halftime, Ben Yedder teed up Martial with a pass from the right — but his scuffed shot hit the post before bouncing back off goalkeeper Dominik Livaković for an own goal.

Poor defending in the 55th helped substitute Josip Brekalo grab his first international goal, too. Latching onto a pass from midfield, he held off three defenders before shooting under goalkeeper Hugo Lloris.

The match went ahead despite striker Kylian Mbappé testing positive for the coronavirus on Monday. The Paris Saint-Germain star scored France's last goal in the World Cup final and netted the only goal against Sweden.

Lloris made his 116th appearance to tie center half Marcel Desailly in third place all-time on France's list. Highly-rated midfielder Eduardo Camavinga came on for his debut during the second half, becoming the youngest player to represent France since the second world war at 17 years, 10 months.

He had a shot saved after darting in from the right, and Martial wasted two late chances.