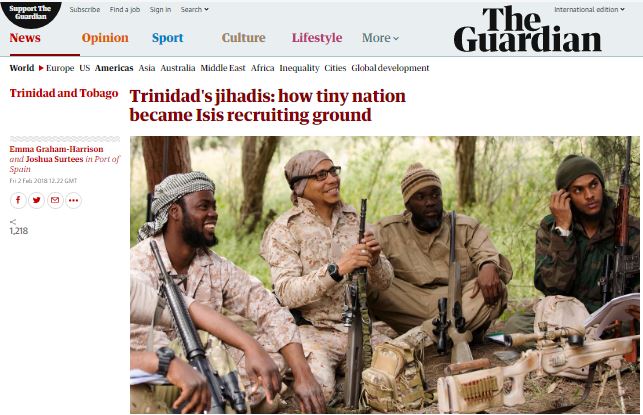 Trinidad and Tobago has been catapulted once again into the international media for its status as having one of the highest recruitment rates for Islamic State fighters in the world.

This time, a report in The Guardian - Trinidad's jihadis: how tiny nation became Isis recruiting ground parallels T&T’s crime situation and gang culture with the appeal and allure of life in the Islamic State.

Journalists Emma Graham-Harrison and Joshua Surtees spoke to anthropologist Dylan Kerrigan, a lecturer at the University of the West Indies, who told them that many young men leave for the Islamic State, drawn to the promise of money and sense of community.

She is quoted as saying, “[One] imam told me that instead of joining a local gang, some see traveling to the Middle East as like joining another gang.”

Graham-Harrison and Surtees clarify though that it is not only those with criminal backgrounds who have been known to leave Trinidad and Tobago for the Middle East. They also refer to former national boxer and Olympic-hopeful Tariq Abdul Haqq, whose aunt is attorney Pamela Elder, SC.

The article goes on to detail Attorney General Faris Al Rawi’s response to the high recruitment rate, and the Government’s approach to curbing the return of those citizens to further radicalize and recruit other Trinidadians.

The Guardian writers also interviewed Fuad Abu Bakr, the son of Imam Yasin Abu Bakr, whose 1990 attempted coup is referred to in the article.

The description of the younger Abu Bakr’s interview implied admiration for the Islamic State fighters, with the article saying “he described the men who went to fight for Isis in glowing terms, and slammed a new law banning child marriage as a violation of religious rights.”

This isn't the first time Trinidad and Tobago has been thrust into the spotlight for the links between the twin island state and the Islamic State. In January 2017, one MSNBC reporter questioned why Trinidad and Tobago wasn't placed on Trump's controversial travel ban, and in February of that same year, the country was highlighted as an exporter of terrorists in The New York Times. In May 2017, 'Krysis', a member of the local gang, Unruly ISIS, was interviewed in an Al Jazeera documentary titled Caribbean to Caliphate.

You can read the full Guardian report here.