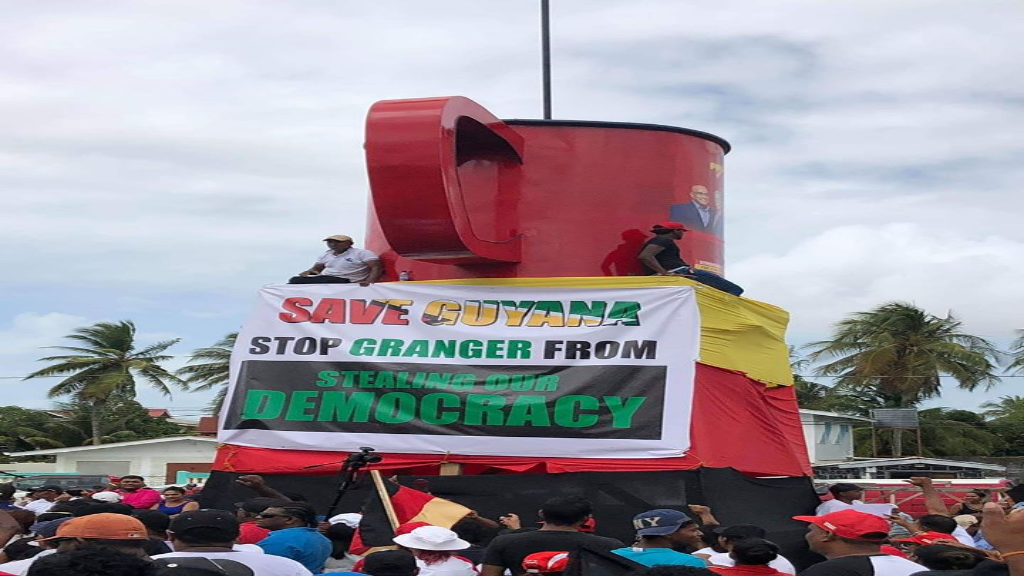 Supporters of the opposition People’s Progressive Party took to the streets of Lusignan and Bath Settlement, Guyana, this afternoon, to protest the results of Monday’s Regional and General Elections.

The protesters said moves by the Guyana Elections Commission (GECOM) and the ruling A Partnership for National Unity+Alliance For Change (APNU+AFC) to allegedly rig the elections is reminiscent of the rule of former President and Prime Minister Forbes Burnham.

Streets were blocked with burning debris but it was cleared by police and fire officers.

Representatives from opposition political parties have called for peace.

“I understand your sense of frustration, anger and fear that the (David) Granger party and administration are trying to steal the election before our very eyes.”

He said the party will do all in its power to prevent this from occurring and they are confident that the international community will not allow vote-rigging to occur.

Jagdeo called on party supporters to obey the law and stay at home.

The presidential candidate of The Citizenship Initiative Rondha-Ann Lam shared on Facebook: “Guyana, I am begging. We are on fire literally and figuratively. I beg of you to stop. I beg of you to curb your tongues and your postings of vile, racist things. I am pleading for it. I am doing whatever the electoral law allows me to do to ensure your rights are not trampled on but I cannot condone any of this in the name of democracy.”