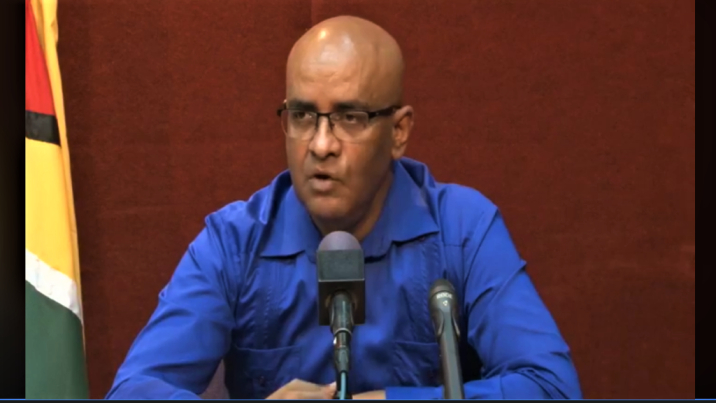 Opposition Leader Bharrat Jagdeo has called on President David Granger to make a public commitment that he will not be sworn in for another term as Guyana’s head of state, until the March 2 Regional and General Elections comes to a credible and transparent conclusion.

Jagdeo, Granger, the Guyana Elections Commission (GECOM) and the Caribbean Community (CARICOM) reached an agreement on March 14 for there to be a recount of votes.

However, the recount was prevented from taking place on Tuesday after a member of the ruling A Partnership for National Unity+Alliance For Change (APNU+AFC) coalition received an injunction from the High Court that set aside the recount agreement reached by the parties.

The matter is scheduled to be heard in the Supreme Court on March 20.

Jagdeo said a cabal of Government Ministers are working to ensure that the coalition wins the case.

He is afraid that the court will allow GECOM to proceed with the unverified results and Granger will be sworn in as President by the weekend.

Jagdeo stated: “We are very disappointed that the court will give an injunction to stop a regional initiative. But we know what the forces at play here are.”

The People’s Progressive Party/Civic (PPP/C) Leader said they will do all in their power to ensure any Government sworn in cannot function.

“If Granger is sworn in, the PPP/C will not recognize him. We will expect and we will call for and already we’re being told, there will be serious international sanctions on Granger, the cabal and even the country.

“Now that will create hardships for lots of people but it will make it very uncomfortable for the cabal, the same ones who are hell-bent on swearing in a President on the basis of these fraudulent results,” he said.

According to Jagdeo, future elections in Guyana are in jeopardy if a free and fair process is not completed.

“If they could rig the elections in front of the eyes of the entire international community, then there is no hope for this country unless we succeed here,” Jagdeo added.

Guyana President commits to finding a solution to electoral deadlock