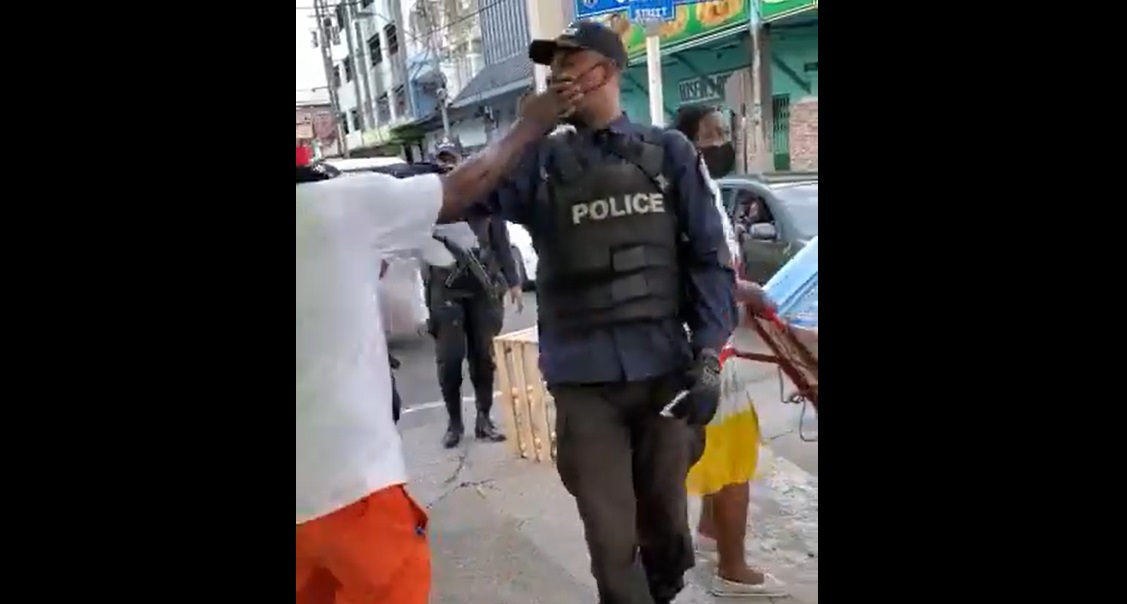 A screenshot of a video in which a police officer and vendor square off.

An extended version of the video in which a man is seen slapping a police officer now shows that the man allegedly threw a ticket he had received for improperly wearing a face-mask onto the roadway.

The new video shows the man filing through things he retrieved from his pocket repeatedly saying that he wasn't accepting the ticket because he was wearing his mask appropriately.

In both videos, his mask is seen covering only his mouth and on his chin.

Police officers physically faced-off with a man assumed to be a vendor, in Port of Spain.

In a video shared on social media, a police officer is seen approaching a sitting man on the corners of Queen and George Streets with a piece of paper, assumed to be a ticket. The man is heard yelling at the officer, explaining that he shouldn’t bring the ticket to him.

The situation quickly escalates as the man stands up and the officer raises his hand to the man’s face. The vendor then swings, resulting in an audible slap across the officer’s face.

Police officers then intervene in the scuffle, detaining the man. The altercation wouldn’t end there as another officer is seen fighting with the detained man as they approach a waiting police vehicle.

The 50-second video then ends.

Loop News has since reached out to the Corporate Communications Unit of the Trinidad and Tobago Police Service for a comment on the matter. This story will be updated following their response.