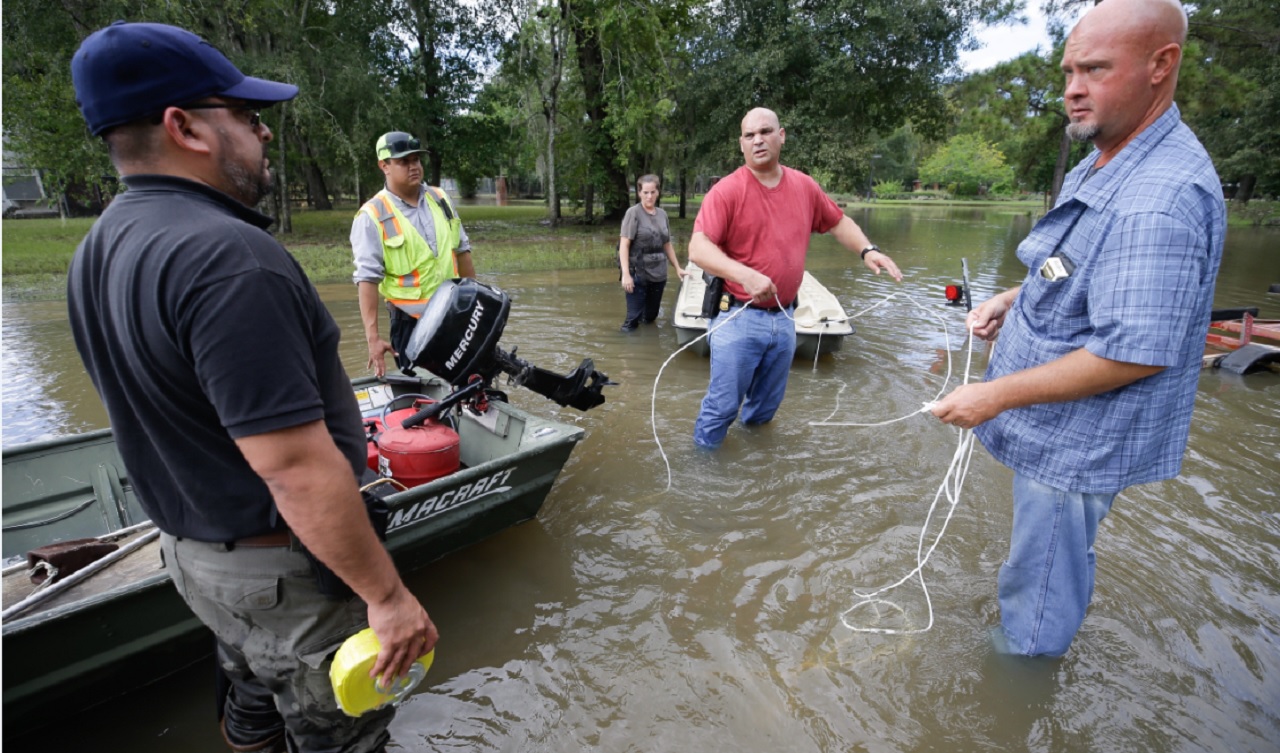 Robert Spooner, a U.S. Customs and Border patrol officer, center, and other volunteers work to prepare boats to help people in the aftermath of Harvey, Wednesday, Aug.30, 2017 in Houston.

A shivering 3-year-old girl found clinging to the body of her drowned mother in a rain-swollen canal in Southeast Texas was likely saved by her mom's effort to carry her child to safety from Harvey's floods, police said Wednesday.

Beaumont police identified the mother as 41-year-old Colette Sulcer and said her daughter was being treated for hypothermia but doing well. When rescuers found the mother and daughter, the girl was on her mother's back, holding on, said Police Officer Haley Morrow.

"I envision what I would do if that was me in that situation and that's what I would do: I would put my child on my back and try to swim to safety or whatever," Morrow said.

Sulcer's vehicle got stuck Tuesday afternoon in the flooded parking lot of an office park just off Interstate 10, said Capt. Brad Penisson of the fire-rescue department in Beaumont. Squalls from Harvey were pounding Beaumont with up to 2 inches (5 centimeters) of rain an hour with 38 mph (60 kph) gusts, according to the National Weather Service.

A witness saw the woman take her daughter and try to walk to safety when the swift current of a flooded drainage canal next to the parking lot swept them both away, Penisson said.

Morrow said the woman's actions probably saved her little girl's life. "When they found her she was still up out of the water," Morrow said.

A police and fire-rescue team in a boat caught up to them a half-mile downstream from Sucler's vehicle, according to Penisson.

Rescuers pulled them into the boat just before they would have gone under a railroad trestle where the water was so high that the boat could not have followed. First responders lifted the child from her mother's body and tried to revive the woman, but she never regained consciousness.

A passer-by allowed first responders to load the mother and daughter into his truck and he brought them to a waiting ambulance, Morrow said.

The child was taken to the Christus St. Elizabeth Hospital in Beaumont, and was expected to be released Wednesday. Officer Carol Riley said the girl was doing "very well" and was chatty.

"Everybody at the hospital and the officers just fell in love with her," Riley said.

At least 21 people have been killed by Harvey since Friday, when it made landfall in Texas as a Category 4 hurricane. Harvey has since weakened to a tropical storm.

Amid Harvey floods, Houston chief worries 'how many bodies?'