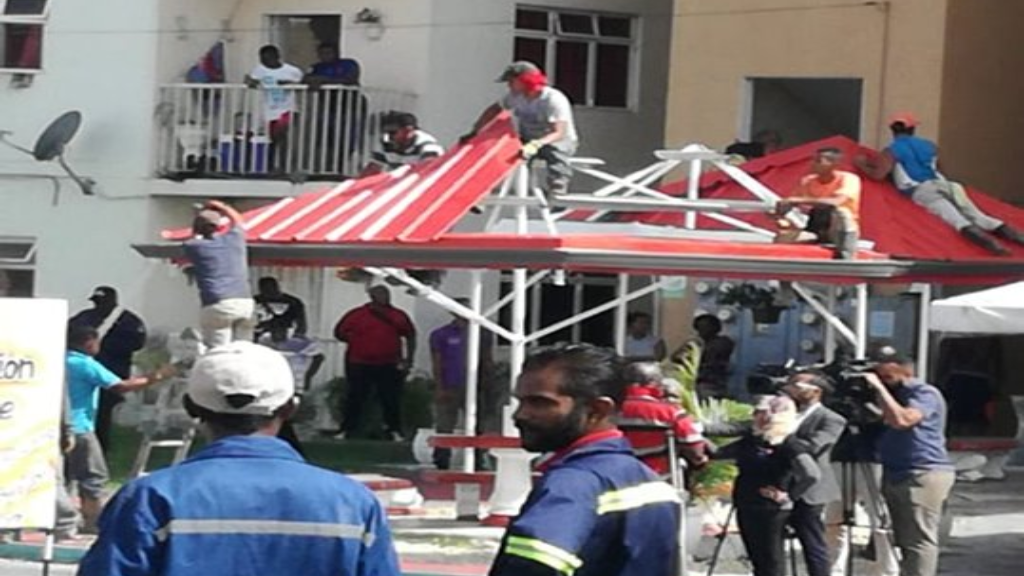 Officials from the Housing Development Corporation (HDC), with the assistance of police officers, moved in today with heavy trucks and workmen to demolish illegally erected structures at Oropune Gardens, Piarco.

This, as a resident and businessman known as 'One Foot' was found to be running a mini mart, hardware, car wash and other business operations in breach of the homeowners’ agreement with the HDC.

The HDC’s Policies and Procedures booklet which is given to all homeowners, stipulates that units are for the sole purpose of living accomodations.

“Whether you live in an apartment, duplex, townhouse or single family unit, the only permitted use of your property is residential living. Homeowners are prohibited from conducting any business of any sort. In addition, no part of your home may be used to advertise or make any public announcement,” the rules state.

Today, after ensuring that due process was followed, the HDC’s Security Department with support from the Police Service, went to Oropune Gardens to begin the removal of illegal structures within the community, beginning with a popular hardware and “liming spot”.

The action follows a visit to Oropune Gardens by HDC Managing Director, Brent Lyons and executives on April 27, where reported homeowner infractions and breaches in the community were confirmed.

During the visit in April, the HDC team spoke directly with the residents in breach of the homeowner’s rules and issued a warning to them to rectify the issues before the HDC was forced to resort to its final position of demolition and/or eviction.

The HDC said many of these homeowners would have received letters, reiterating its position.

The Corporation said it has taken note in the past year of the major breaches made in the community and issued a final warning to those still in breach and who would have previously received correspondence from the HDC, to “do the right thing and remedy the situation before the HDC takes further action”.

The HDC stressed that the problems facing Oropune Gardens require a multi-agency, multi-pronged approach to arrive at a resolution.