'He cried and hugged me': Brazilian still separated from son 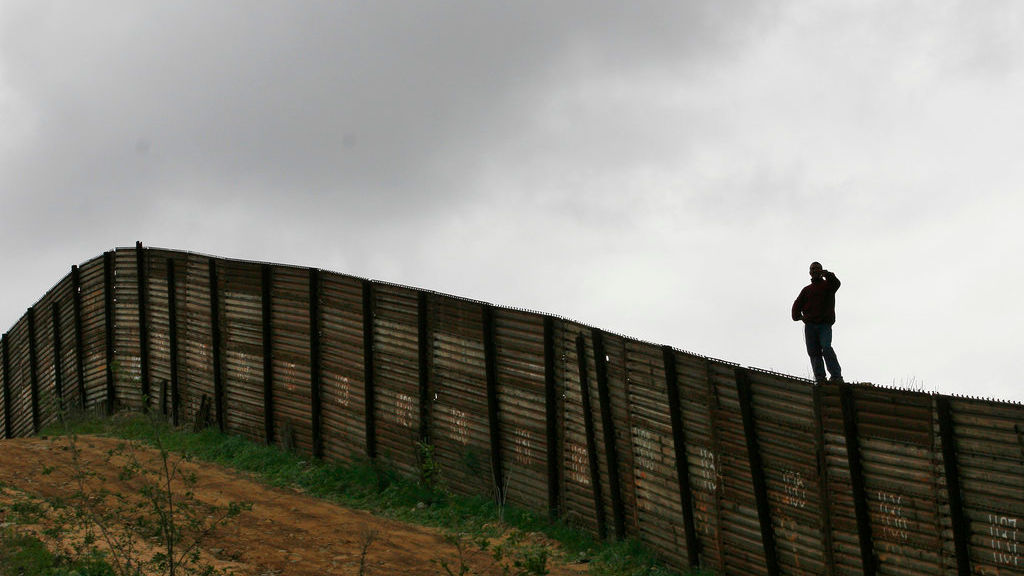 This April 27, 2006 file photo shows the U.S.-Mexico border fence near Smuggler's Gulch west of the San Ysidro Port of Entry in San Diego. Twenty-six days after being apprehended on May 23, 2018 at the U.S.-Mexico border with his son, a Brazilian man in detention says he has no idea when he may see his 9-year-old, who he fears is distraught and having difficulty communicating since he only speaks Portuguese. (AP Photo/Denis Poroy, File)

Twenty-six days after being apprehended at the U.S.-Mexico border with his son, a Brazilian man in detention says he has no idea when he may see his 9-year-old, who he fears is distraught and having difficulty communicating because he only speaks Portuguese.

In a phone interview late Thursday from Cibola County Correctional Center in Milan, New Mexico, the 31-year-old father said he had only spoken to his son once by phone since they were separated. The father, who has applied for asylum, agreed to speak to The Associated Press on the condition his name not be used because he fears for his life if sent back to Brazil.

"He cried. He was so sad," said the father of his son. "I had promised him it would only be three to five days."

The man, from the central eastern Brazilian state of Minas Gerais, said he had recently lost his job in a bakery. He also said he had a debt of around US$8,000 that he could not pay, and a criminal group was after him to come up with the money. He declined to give more details.

So he decided to go to the States, planning to find work and send for his wife and their other son, who is 3. He and his 9-year-old took a flight to Mexico City, and then made their way to the border. When trying to cross illegally near San Ysidro, California, the two were picked up by border agents.

He and his son were taken to a detention center with many other families.

"For two days," the father said, "all we were given were Doritos, cereal bars and juice."

Then he was told that his son would be taken to a facility for minors, and that they'd be separated no more than five days.

"I didn't want to scare him. I said, 'Look son, I'll just be gone three days, five at the most, and then I will see you again,'" said the father. "He cried and hugged me. He is a good kid. He had never been separated from me or his mom."

Ten days later, the father learned his son had been taken to an Office of Refugee Resettlement in Chicago. He called a legal hotline, and an immigration lawyer eventually helped facilitate a 20-minute phone conversation with the boy.

Meanwhile, the child already had made contact with his mother back in Brazil. When they were separated, the father gave his son their cellphone, which had his mother's number.

Reached Thursday evening, the boy's mother told the AP that her son is allowed to call on Mondays and Thursdays, and each time they can speak 30 minutes. She said the boy is calmer than during their first conversations, but he is still anxious and wants to see his parents. The boy takes Ritalin for hyperactivity, and the facility has continued to give it to him, she said.

"He cries a lot and wants to leave," said the mother, who is 31 and cleans office buildings. "He is calmer now, but he still wants to get out of there."

"It's horrible. Awful," she said. "The kids are suffering. (Parents) are too."

Both parents told the AP they have repeatedly asked when they will see their son. They were hopeful that the executive order President Donald Trump signed Wednesday to cease such family separations for immigrants would help give them clarity, but so far there is none.

The father said he had an asylum interview on Thursday. When he asked about his son, the interviewing agent said that was the responsibility of a different department.

The mother said she has gotten similarly vague answers from the facility via a lawyer trying to help them.

A nonprofit law firm that works with immigrants pro bono, Aldea, The People's Justice Center, this week filed federal lawsuits on behalf of the 9-year-old and another Brazilian, a 15-year-old who also was separated from his father. The lawsuits contend the separation and processing of the parents and children separately are illegal and demand reunification.

"We are bringing these suits because what these families have experienced is a travesty," said Karen Hoffmann, an attorney working on the cases. "Nobody knows what reunification is going to look like. The government certainly doesn't know."

Official: Hundreds of kids reunited with families since May

Trump tells GOP to 'stop wasting their time' on immigration

Airlines ask US not to put migrant children on flights