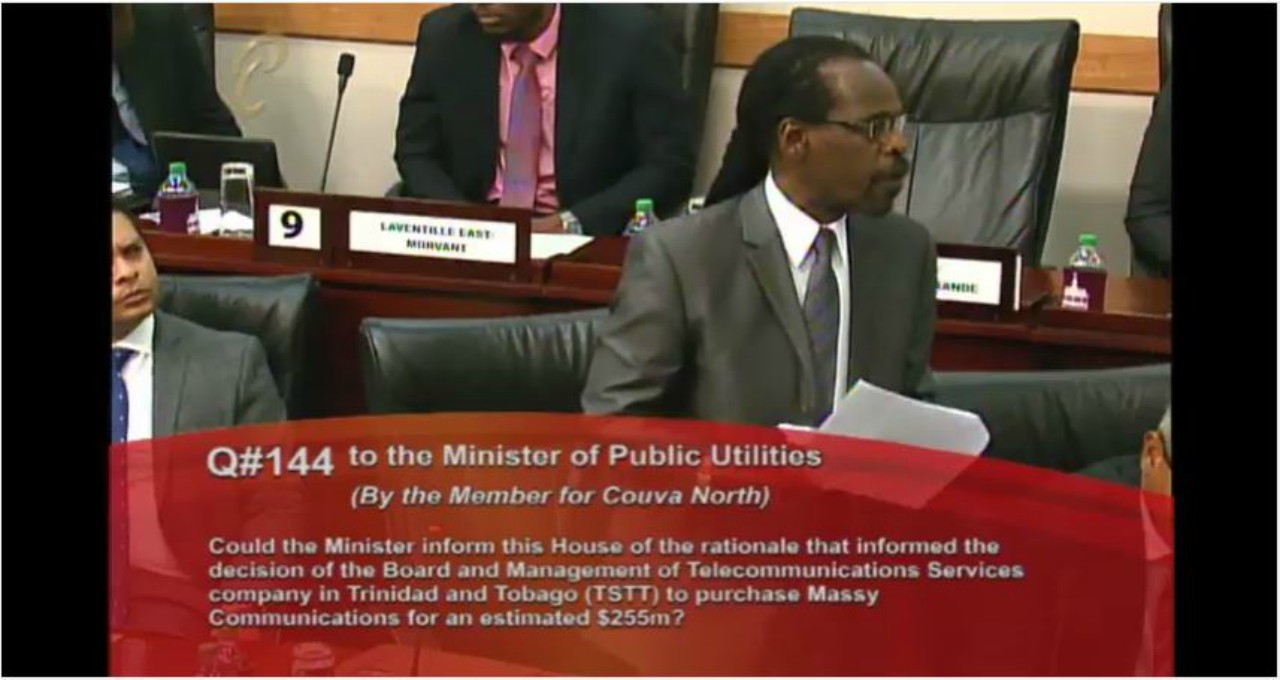 Public Utilities Minister Fitzgerald Hinds is seeking to assure the public that TSTT’s decision to purchase Massy Communications Limited for $255 million dollars, was well thought out.

Minister Hinds was responding to questions raised by Couva North MP Ramona Ramdial in the Lower House on Friday pertaining to the rationale behind the company’s purchase.

The Minister stated that TSTT’s Board of Directors underwent extensive deliberation before the decision to purchase the company.

“TSTT’s acquisition of Massy Communications Limited is firstly consistent with the procedures the company must follow for acquisitions and secondly, aligned to its five-year plan for engaging the telecommunications industry. This acquisition has afforded TSTT a strategic opportunity to not only improve its operational efficiency and service quality but also to expand both its infrastructure and customer base.

The acquisition of Massy Communications Limited was a well thought out plan, well thought out by the TSTT’s Management and was a subject of a detailed due diligence exercise undertaken over a sustained period. This analysis included technical, financial, legal and operational reviews of the industry experts and consultants.

The Board of Directors in its approval of their proposal to acquire Massy Communications Limited, are confident that it is a sound business decision that will benefit not only the company and its shareholders but also its customer base and the public at large.”

He said TSTT developed a five-year strategic plan with a focus on expanding the country’s fiber access to 200,000 homes, rolling out the LTE high-speed wireless data network to key parts of the country and a complete overhaul of its broadband network technology and the introduction of a suite of first world business operations support systems.

Hinds further stated that the five-year strategic plan was presented to the Cabinet and subsequently to the Minister of Finance.

TSTT received approval from the Finance Ministry in October, 2016, to borrow TT$1.9 billion to finance its strategic plan which purchasing Massy Communications was closely aligned with.

The expected outcomes from TSTT’s decision to acquire Massy Communications include:

1 The acquisition of Massy Communications’ new state of the art 900 kilometre Broadband Fibre Network, passing approximately 34,000 households and businesses, thereby reducing the need to spend approximately US$20 million in foreign exchange capital expenditure for this.

4 Access to Massy Communications’ 6000 Residential Customer Base and upsell its portfolio, voice and security services

6 Direct access to over 100,000 Massy Loyalty Card Holders and provided them with incentives to purchase communications services from TSTT

“TSTT’s acquisition of Massy Communications Limited has saved the company significant expenditure in making use of the infrastructure, technology and systems that are already in place, especially so at a time where there are challenges with maintaining our foreign exchange reserves,” he said.

Meanwhile, Ramdial questioned whether this included a restructuring or a cutting of the labour force of TSTT, however, Minister Hinds stated that “nowhere in the programme as I have just outlined it, did that matter arise.”

And, Caroni East MP Dr Tim Gopeesingh raised questions as to how the rest of the 1.9 billion allocated to TSTT from the Finance Ministry would be spent granted that TT$255 million went into the purchase of Massy Communications Limited.

The Public Utilities Minister stated, however, that he could not say at the time.

In May, TSTT issued a release stating that the company had entered into a Share Purchase Agreement (SPA) in which TSTT will purchase 100% shareholding of Massy Communications Ltd.