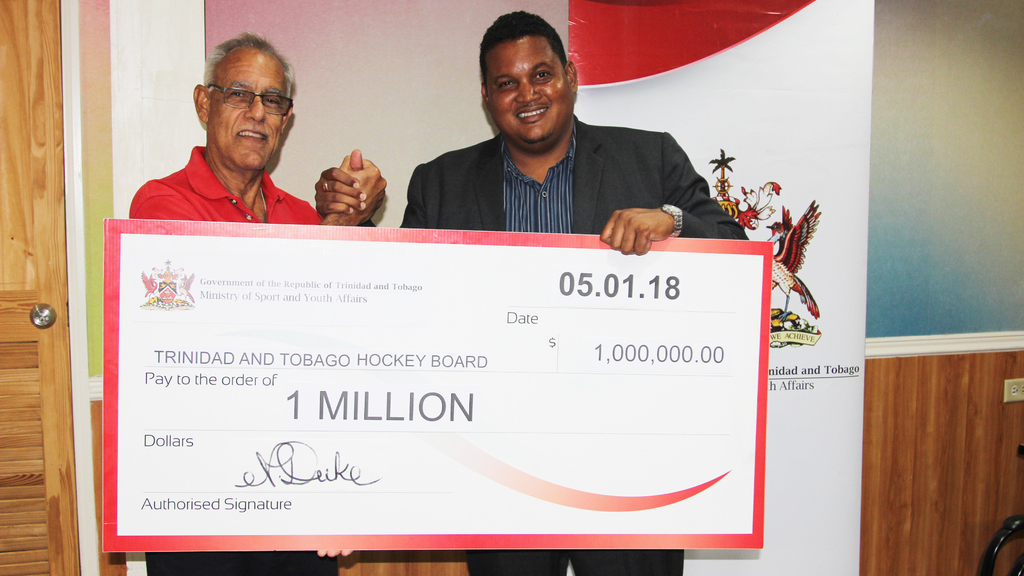 Darryl Smith, Minister of Sport and Youth Affairs, presented Douglas Camacho, President of the Trinidad and Tobago Hockey Board with a cheque valued at $1 million on January 5 at the TTOC’s Head Office.

Trinidad and Tobago's senior hockey men have received a welcome boost to their FIH Indoor World Cup preparation with an injection of funds from the Ministry of Sport and Youth Affairs.

At a presentation last Friday, Honourable Darryl Smith, Minister of Sport and Youth Affairs, handed over TT$1m to Mr. Douglas Camacho, President of the Trinidad and Tobago Hockey Board, which will go towards travel, accommodation, uniforms and other team necessities for scheduled warm-up games in late January as well as the Indoor Hockey World Cup Finals to be held in Germany from February 7-11.

Mr. Camacho confirmed that the national team has been working hard in training sessions at the Woodbrook Youth Facility and is looking forward to the challenge of participating in Trinidad and Tobago's second outing at the Indoor World Cup. "We've been drawn in Pool A to face European teams and Australia so we hope to bring our exciting brand of hockey to the tournament and show them what we've got. We're not going to make up numbers but to prove that Trinidad and Tobago belongs on the world stage."

Hockey is one of several team sports which have been successful in 2017 and according to Minister Smith recent results have been encouraging. "We are proud of the hockey men for qualifying for the second time for the Indoor World Cup and had to ensure they had every resource available to prepare adequately and perform at their best come February. Wherever T&T's athletes play, we always make an impact, and even more when we host. look at the success of the women's volleyball team, the CCCAN team, the badminton teams...home court advantage is real and that's why we're making a concerted effort to host more sporting events in Trinidad and Tobago to showcase our own talent and establish ourselves as the regional hub for sport."

The men's hockey team departs on January 24for a ten-day pre-tournament tour in London, after which they travel to Berlin for the World Cup.