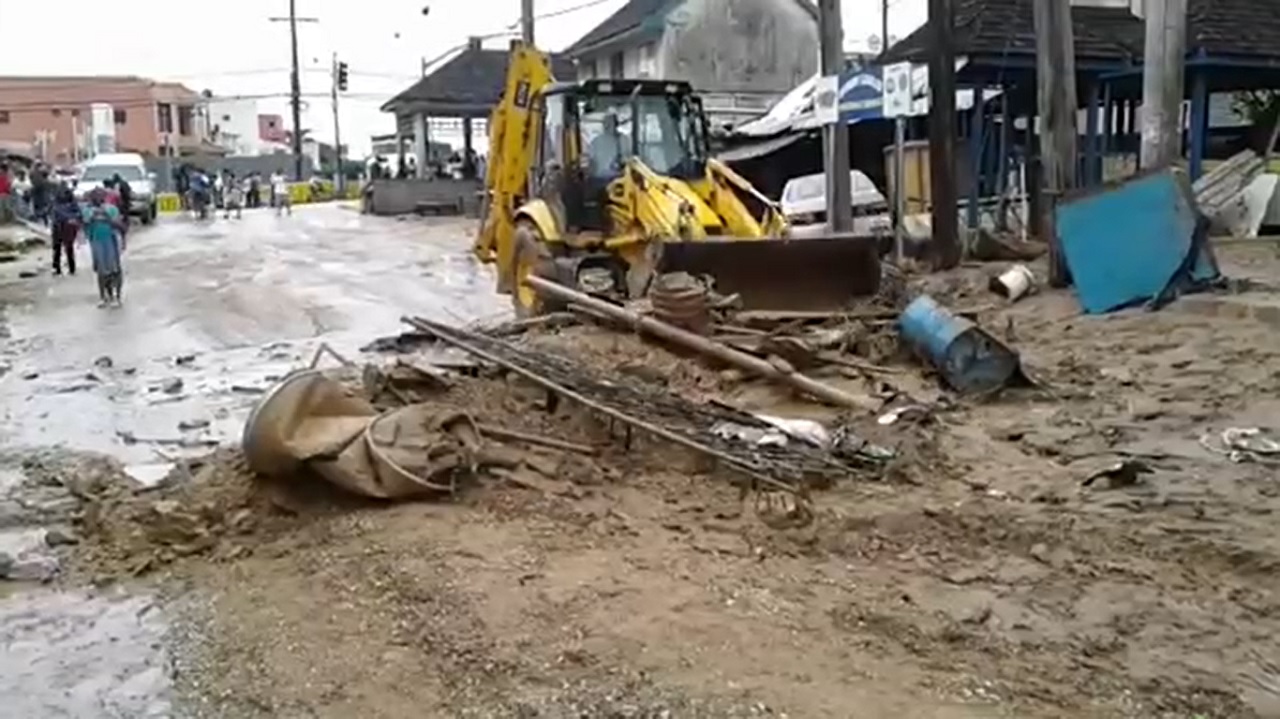 A tractor clears mud from a roadway in Montego Bay after flooding last week.

Climate change and the environment were big on his agenda on Sunday when Jamaican Prime Minister Andrew Holness addressed the first Jamaica Labour Party (JLP) annual conference since his party was returned to government in the February 2016 General Elections.

The Prime Minister opened his approximately 50-minute-long presentation with a focus on the devastating flood that was experienced by ‘Montegonians’ last week when four hours of rainfall flooded the downtown section of the second city, sweeping away cars, washing away the contents of several homes and business places, and forcing businesses to close amid being overcome by the raging waters.

Holness laid the blame squarely at the feet of climate change. He argued that Jamaica and the wider Caribbean region, while doing little to contribute to the phenomenon, were feeling the full effects of climate change.

He told international donor agencies that it was “better to invest in climate resilience than to seek to give us aid after the damage was done.”

The prime minister was speaking against the background of two devastating Category 5 hurricanes in September that wreaked havoc on nearly a dozen Caribbean states, leaving more than 60 persons dead and billions of dollars in crop and infrastructure damage.

Jamaica was spared this busy Atlantic hurricane season, which has so far had 15 named storms, but has been severely impacted by hurricanes over the past 15 years, suffering loss of lives and billions of dollars in damage to the local infrastructure.

Mindful of this fact, Holness told party supporters, foreign delegates and members of the diplomatic corps in attendance at the party’s conference, that the biggest challenge facing the Caribbean at this time is climate change. He lamented that oftentimes, the pledged aid following a disaster does not materialise, and argued that the Caribbean’s contribution to climate change has been miniscule in the overall global stage.

"Little Jamaica, little St Lucia, little Dominica, we didn't cause climate change. We cannot emit that much carbon to create a footprint on the world's climate, but we are going to be the first to be affected by climate change," said Holness.

"I want to appeal to the global community, to the international institutions. Hurry up and set a system in place where countries can make the investment in small island developing states like Jamaica, like St Lucia, like Dominica, so that we can build resilient infrastructure to withstand the impact of hurricanes, and for us to recover quickly,” Holness urged.

Montego Bay Flooding: a month's worth of rain in four hours