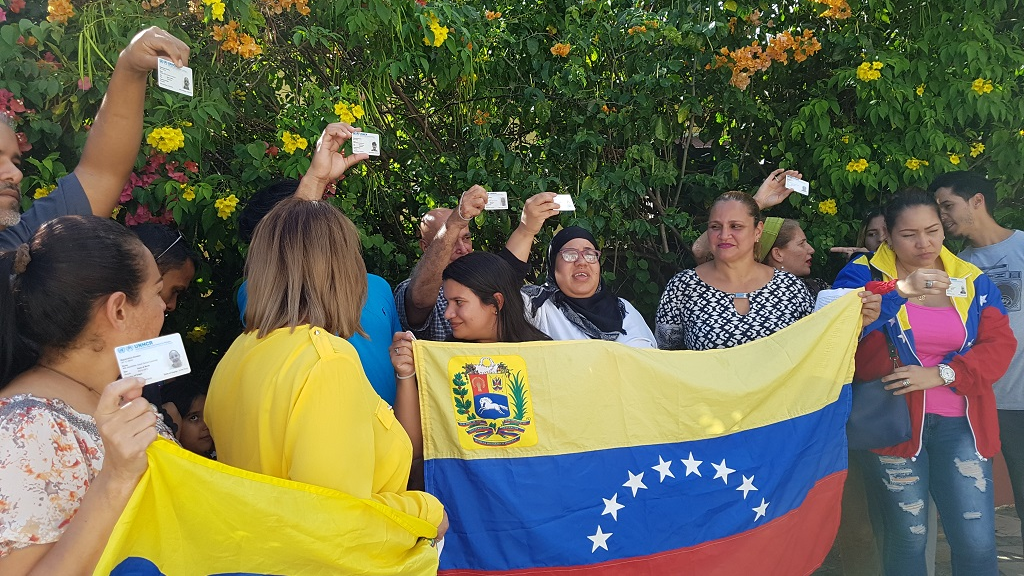 Photo: Venezuelan refugees and asylum seekers hold up their UNHCR identification cards. They said immigration officers have said the cards are 'worthless'. Photo and video by Alina Doodnath.

Arriving for a better life, a Venezuelan woman and her friend were instead allegedly kidnapped and assaulted by a Rio Claro man, who she said is running a sex trafficking ring and who allegedly has ties with the local police station there.

The woman related her story to media during a press briefing on Friday January 18, 2019. The story was initially broken by Loop News in December 2018.

Close to tears, the woman, who is a medical student from Tucupita, Venezuela, said she arrived illegally seeking to send help to her father, who is diabetic, and her brother in Venezuela.

However a ‘friend’ betrayed them by inviting them to visit in Rio Claro, where they were kidnapped.

She managed to secure a WiFi connection at the house where she was trapped and send for help. However when they were rescued, their attackers were allegedly released, and they were detained.

Her tale is one of many who were allegedly abused at the hands of the authorities.

“We had no water or food for four days. We were not allowed to talk to anyone. We were treated like animals,” she said.

The briefing was held to address the abuses refugees are being subjected to at the hands of authorities.

The group said they will be submitting a petition to Prime Minister Dr Keith Rowley and the Minister of National Security Stuart Young at the next Parliament session to address these abuses and the lack of refugee laws in Trinidad and Tobago.

One man who has his asylum seeker certificate along with his partner, said police broke down their door and detained them without explanation, simply saying there was an ‘investigation’.

One woman who chose not to be identified said her father, who is diabetic, is being refused medication or even sufficient water while detained at the Immigration Detention Centre (IDC). Both her parents, who are ailing and elderly, were detained for the past five months.

“They told us we are less than dogs. I tried to send him things to keep his blood sugar up, and they said ‘no’. I don’t know how long they are going to hold them there, they will die if they stay here,” she said.

Another said that at least one child was being kept at the IDC with their parents, with no protections for them or assessment by Child Protection Services.

The refugees said often, they are detained by authorities, then brought before a magistrate and made to pay a bond, some have paid as much as $10,000. They are not allowed to work and many cannot pay the bond.

Even more horrific are claims that Venezuelan women and men have been raped at the IDC. A woman who was held there said she spoke to women who were raped. One of the women allegedly became pregnant.

Young, who was in London leading a visit of the Trinidad and Tobago Security Delegation at the time of this story, said these allegations are very serious and will be investigated upon his return.

“These are very serious and disturbing allegations. I would like to have these allegations investigated,” he said.

SOP’s for treating with asylum seekers and refugees

When an asylum seeker has been registered with the local agency (Living Water Community), they must present themselves to the Immigration Division who (if they meet requirements) will then place the person on an Order of Supervision in the care of the Living Water Community.

The refugee/asylum seeker is then registered with the UNHCR.

Refugees are entitled to international protection, ensuring the safety and well-being of refugees. In particular, the 1951 Convention outlines:

1. Principle of non-refoulement (prohibits countries from expelling or returning a person to a place where his/her life is in danger).

2. Principle of non-detention (not imposing penalties on account of illegal entry or the presence of refugees).