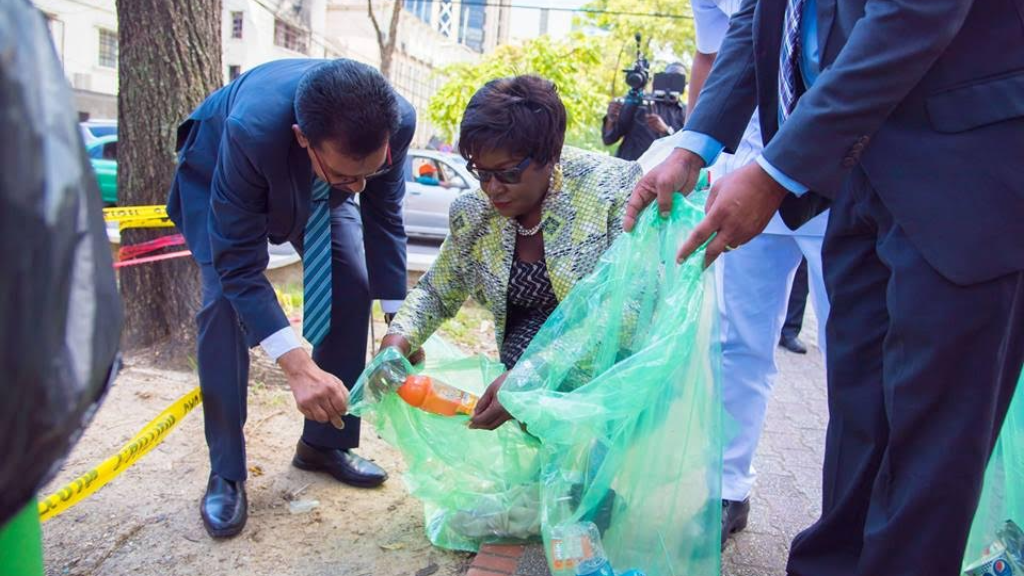 Photo courtesy the Ministry of Rural Development and Local Government.

Hosein was speaking at the launch of Phase 2 of the Community, Awareness, Recycle, Everyday project known as iCARE, held on Wednesday at the Central Bank in Port of Spain.

He said recently there have been several incidents of persons dumping garbage at the side of roads and other inappropriate areas, some of which have been brought to his attention through social media videos.

Hosein said it was videos such as these that assist litter wardens in their investigations and he encouraged the public to continue to "put them on blast".

"I urge the people taking these videos to keep on doing it and putting these lawbreakers on blast on social media, in other words to embarrass them."

Hosein said the Ministry would be taking a forceful stand against persons found to be indiscriminately dumping.

Also speaking at the launch was Minister of Public Utilities Robert Le Hunte who lamented that improper garbage disposal contributes to the flooding problem in this country.

Le Hunte said there is a need for a culture change to address the problem and to bring this country up to international standards.

The iCARE project is aimed at reducing the amount of recylable waste at the country's landfills and is being supported by a number of Miistries and organisations including the Ministry of Planning and Development, the Ministry of Public Utilities, the Ministry of Rural Development and Local Government and the Solid Waste Management Company Ltd (SWMCOL).

Planning and Development Minister Camille Robinson-Regis said the country's landfills are close to capacity and if something is not done to reduce waste, the country will soon be swimming in garbage.

She said the iCARE project would foster a culture of recycling and promote reuse rather than throwing away materials like plastic and metal containers.

Special collection bins have been placed in several locations to collect recyclable waste, including in schools, government buildings and on the Brian Lara Promenade.

The project will also include a public awareness campaign and the setting up of recycling plants.