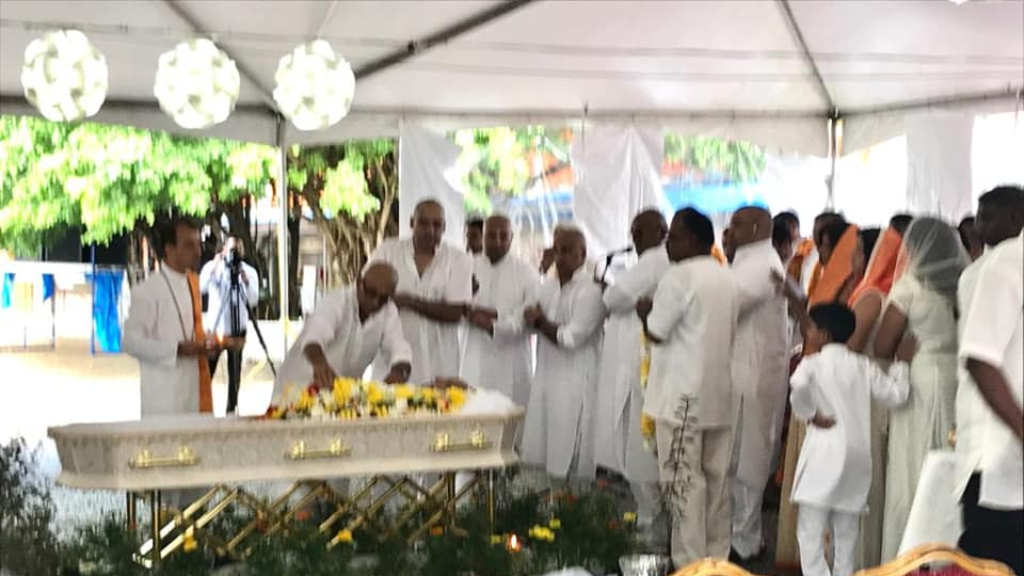 Family, friends, teachers, religious leaders and politicians turned out in their numbers to pay their final respects to late Secretary-General of the Sanatan Dharma Maha Sabha (SDMS), Sat Maharaj.

Maharaj died last Saturday at the age of 88, after being hospitalised for over a week due to a stroke he suffered on November 7.

His funeral was held at the Lakshmi Girls' Hindu College, St Augustine on Tuesday.

His eldest son, Vijay, delivered the eulogy, telling the story of a man who was brave, strong, and had the "courage to say what was needed to be said at a time when no one was prepared to say it to a country that didn’t want to hear it".

He said despite being a controversial figure, it could not be denied that he ex­pressed his views with hon­esty and con­vic­tion.

“Some people felt that the views were expressed too rigidly. But I can assure you there was an element of honesty in everything that he did.”

“He has been an education icon in all the things he has done and in all his pursuits we recognise the importance of a man of his stature so that we can move forward and upwards in ensuring that our education system continues to strive.”

Historian Selwyn Cudjoe was also in attendance at the funeral for the late Hindu leader.

He remembered Maharaj as a patriot who fought for rights of not only Indo-Trinidadians but all groups and hailed him as "Trini to the bone".

"Sat served his country by serving his people, but in so doing, he helped us all to develop our national identity and to recognise that Trinbagonianism comes in different forms and in different shapes, in different theological formulations and in varying religious alignments."

"Like Dr King, Sat Maharaj would go down in our history as one of the major architects in helping to perfect our union, to make ours a fairer society and to make this a better place in which to live."

Maharaj was cremated at the Caroni Cremation Site. His ashes were to be scattered in the Gulf of Paria.