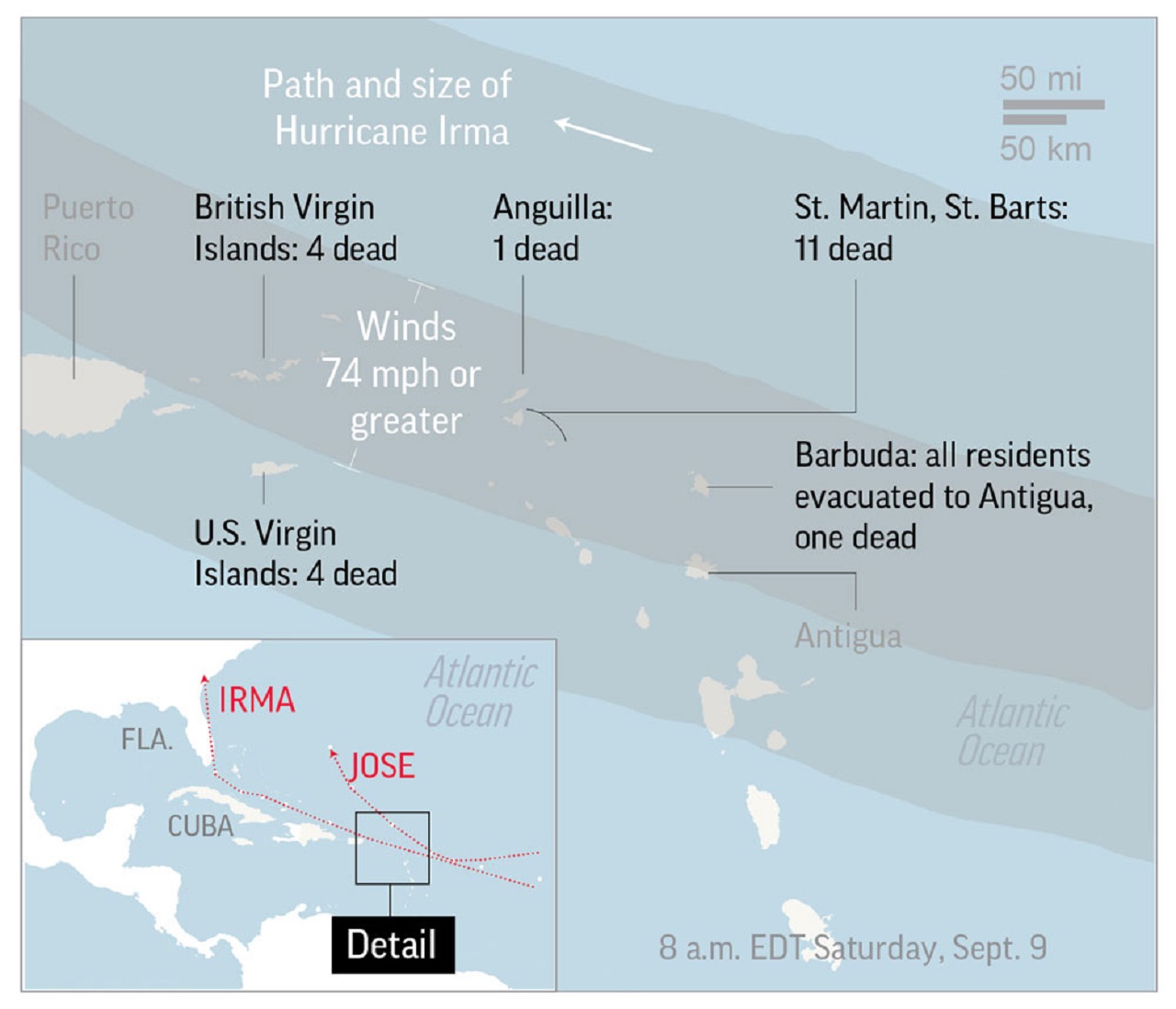 More than 20 dead across the Caribbean

Cuban coastal cities were clobbered by high winds from Irma that upended trees, toppled utility poles and scattered debris across streets. Roads were blocked, and witnesses said a provincial museum near the eye of the storm was in ruins.

There were no immediate reports of casualties in Cuba in addition to the 22 dead left in Irma's wake across the Caribbean, where the storm ravaged such lush resort islands as St. Martin, St. Barts, St. Thomas, Barbuda and Anguilla.

Many of Irma's victims fled their battered islands on ferries and fishing boats for fear Jose would destroy or drench anything Irma left untouched.

On the Dutch side of St. Martin, an island divided between French and Dutch control, an estimated 70 percent of the homes were destroyed by Irma, according to the Dutch government. Officials said Jose was forecast to dump more rain on the island's buildings, many of which lost their roofs to Irma.

Some islands received a last-minute reprieve from Jose as it passed by.

The U.S. National Hurricane Center downgraded a hurricane warning for Barbuda and Anguilla. A hurricane watch also was discontinued for nearby Antigua.

As Irma rolled in, Cuban soldiers went through coastal towns to force people to evacuate, taking people to shelters at government buildings and schools — and even caves.

Eastern Cuba, home to the island's poor, rural population and a major sugarcane-growing area, faces a difficult recovery, with its economy in tatters even before the storm because of years of neglect and lack of investment.

Civil Defense official Gergorio Torres said authorities were trying to tally the extent of the damage, which appeared concentrated in banana-growing areas.

Looting was reported on St. Martin. Curfews were imposed there and on St. Barts, and French and Dutch authorities announced plans to send hundreds more troops and police to keep order.

It was not immediately known whether U.S. President Donald Trump's luxury property on St. Martin had been damaged.

On Anguilla, Vanessa Croft Thompson crammed into her home's laundry room with her husband, her best friend and their children along with their cats and dogs, as Irma's floodwaters swamped her house. The storm peeled off her roof, rained water inside, and sheared paint from her walls.

"Our hurricane-proof door was bending in, it was warping ... and the entire house was shaking like it was an earthquake," she said.

Thompson, the head of the English department at Anguilla's only high school, said: "I don't even know something that's not destroyed. There's nothing here that hasn't been ripped apart by Irma."