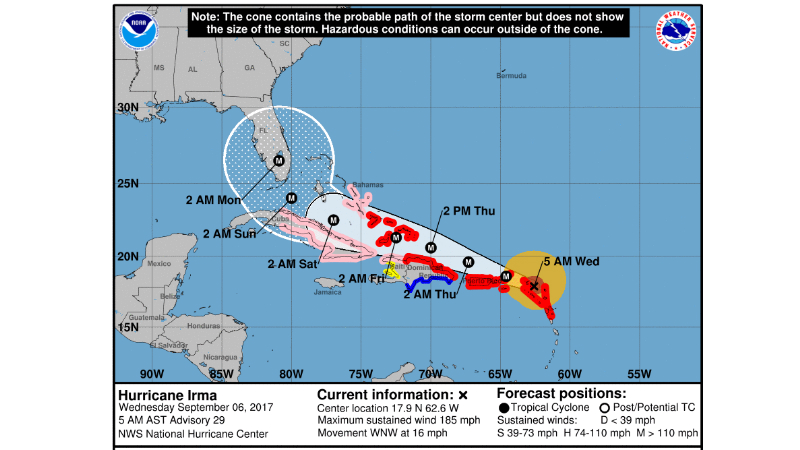 The US National Hurricane Center (NHC) said at 5 a.m. that the eye of Hurricane Irma is moving away from Antigua and Barbuda and heading toward St Martin.

Reports out of Antigua indicated that the eye of the hurricane passed over Barbuda around 2 a.m. this morning. The state-owned ABS TV/Radio reported losing contact with key posts in Barbuda.

Some structural damage was reported in Barbuda, which experienced sustained winds of 120 mph with gusts of over to 150 mph. The roof of the police station came off and policemen relocated to a shelter.

According to the Antigua Meteorological Service, St Kitts and Nevis and Montserrat are expected to see winds taper off as the morning continues. However, Anguilla and the British Virgin Islands remain within Irma's strike zone.

Irma is moving toward the west-northwest near 16 mph (26 km/h), and this general motion is expected to continue for the next couple of days. On the forecast track, the extremely dangerous core of Irma will move over portions of the northern Leeward Islands this morning, move near or over portions of the northern Virgin Islands later today, and pass near or just north of Puerto Rico this afternoon or tonight.

Some fluctuations in intensity are likely during the next day or two, but Irma is forecast to remain a powerful category 4 or 5 hurricane during the next couple of days.

The Government of the Bahamas has issued a Hurricane Warning for the Southeastern Bahamas and the Turks and Caicos Islands, and a Hurricane Watch for the Central Bahamas. The Meteorological Service of Barbados has discontinued the Tropical Storm Warning for Dominica.

Hurricane Irma most powerful ever in Atlantic

UPDATE: Jose expected to strengthen into a hurricane