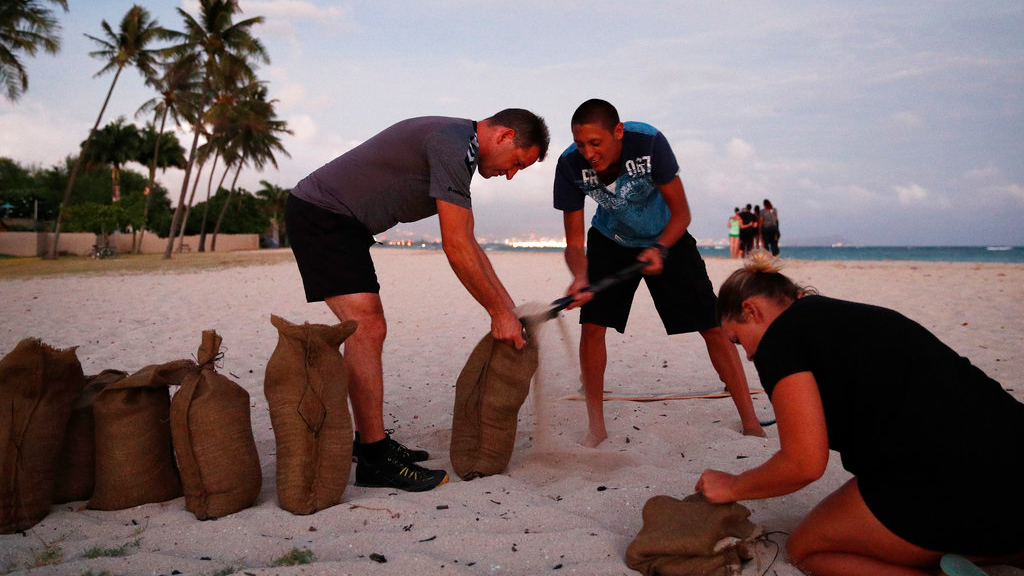 People, who declined to be named, fill up sand bags that will be used to help protect their home in preparation for Hurricane Lane, Wednesday, Aug. 22, 2018, along Ewa Beach in Honolulu. As emergency shelters opened, rain began to pour and cellphone alerts went out, the approaching hurricane started to feel real for Hawaii residents.(AP Photo/John Locher)

Hurricane Lane soaked Hawaii's Big Island on Thursday, dumping 12 inches of rain in as many hours as residents stocked up on supplies and tried to protect their homes ahead of the state's first hurricane since 1992.

The National Weather Service warned that some areas could see up to 30 inches (76 centimetres) before the system passes. Bands of rain extended 350 miles (566 kilometres) from the hurricane's centre.

Lane was not projected to make direct hit on the islands, but officials warned that even a lesser blow could do significant harm.

"You do not need a direct strike to have major impacts from a hurricane this strong," said Steve Goldstein, a meteorologist at the National Oceanic and Atmospheric Administration in Washington.

The Category 4 storm could bring dangerous surf of 20 feet and a storm surge of up to 4 feet, forecasters said.

As of 2 a.m., the hurricane was 335 miles (540 kilometres) south of Honolulu and moving northwest. Maximum winds had weakened slightly to 130 mph, the National Weather Service said.

The storm was expected to turn to the north later Thursday and into Friday, with little change expected in forward speed. The centre of the system could move close to or over portions of the main islands on Thursday or Friday. The storm will then likely turn to the west Saturday and Sunday and accelerate, forecasters said.

On Wednesday, the hurricane's speed slowed from 9 mph to 7 mph (15 kph to 11 kph). A slower hurricane increases the threat of flash floods and landslides because of prolonged rainfall.

The arrival of the storm's outer bands made the threat seem more real.

"Everyone is starting to buckle down at this point," said Christyl Nagao of Kauai. "Our families are here. We have businesses and this and that. You just have to man your fort and hold on tight."

Shelters opened Wednesday on the Big Island and on the islands of Maui, Molokai and Lanai. Officials urged those needing the Molokai shelter to get there soon because of concerns that the main highway on the island's south coast could become impassable.

On the island of Oahu, shelters were scheduled to open Thursday. Officials were also working to help Hawaii's sizeable homeless population, many of whom live near beaches and streams that could flood.

Authorities also warned that the shelters are not designed to withstand winds greater than about 40 mph (64 kph) and that for most people they should be a "last resort."

"Whenever possible, the public should plan to shelter in place or stay with family or friends in homes outside of these hazard areas that were designed, built or renovated to withstand anticipated conditions," the city and county of Honolulu said in a statement.

Melanie Davis, who lives in a Honolulu suburb, said she was gathering canned food and baby formula.

"We're getting some bags of rice and, of course, some Spam," she said of the canned lunchmeat that's popular in Hawaii.

She was organizing important documents into a folder — birth and marriage certificates, Social Security cards, insurance paperwork — and making sure her three children, all under 4, have flotation devices such as swimming vests "just in case."

Public schools were closed for the rest of the week, and local government workers were told to stay home unless they are essential employees.

The central Pacific gets fewer hurricanes than other regions, with about only four or five named storms a year. Hawaii rarely gets hit. The last major storm to hit was Iniki in 1992. Others have come close in recent years.

"We're planning on boarding up all our windows and sliding doors," Napua Puaoi of Wailuku, Maui, said after buying plywood from Home Depot. "As soon as my husband comes home — he has all the power tools."

Puaoi was 12 at the time of Hurricane Iniki.

"When it did happen, I just remember pandemonium. It was all-out craziness," she said.

Unlike Florida or Texas, where residents can get in their cars and drive hundreds of miles to safety, people in Hawaii are confined to the islands and must stay put. They have to make sure they have enough supplies to outlast prolonged power outages and other potential emergencies.

The Federal Emergency Management Agency has several barges with food, water and supplies that it moved into the region ahead of Hurricane Hector, which skirted past the islands more than a week ago, according to FEMA Administrator Brock Long.

The U.S. Navy was moving ships and submarines out of Hawaii. All vessels not currently undergoing maintenance were being positioned to help respond after the storm if needed.