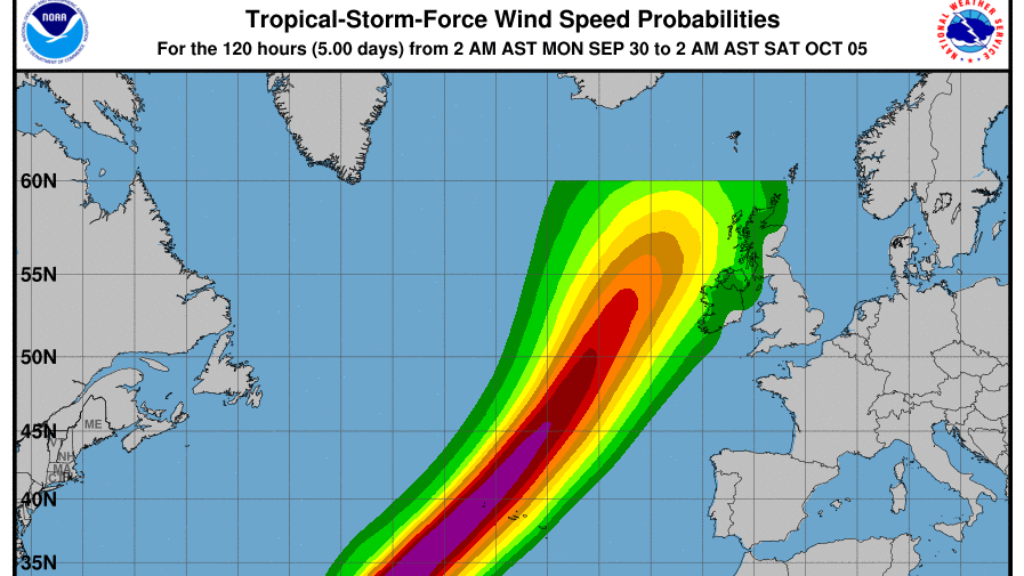 Hurricane Lorenzo has steered clear of the Caribbean but is now making a beeline for the United Kingdom and Ireland, bringing hurricane-force winds.

According to an update from the US National Hurricane Centre on Monday morning, the category 2 storm has an expansive wind field and continues in a north-northeastward direction.

CHANGES WITH THIS ADVISORY:

SUMMARY OF WATCHES AND WARNINGS IN EFFECT:

A Hurricane Watch is in effect for...

A Hurricane Watch means that hurricane conditions are possible within the watch area.  A watch is typically issued 48 hours before the anticipated first occurrence of tropical-storm-force winds, conditions that make outside preparations difficult or dangerous.

A Tropical Storm Watch means that tropical storm conditions are possible within the watch area, generally within 48 hours.

A Hurricane Warning will likely be issued for some of these areas later this morning.

For storm information specific to your area, please monitor products issued by your national meteorological service.

At 800 AM AST (1200 UTC), the center of Hurricane Lorenzo was located near latitude 29.4 North, longitude 42.9 West.  Lorenzo is moving toward the north-northeast near 14 mph (20 km/h).  A turn to the northeast is expected later today with a gradual increase in forward speed through Wednesday.  On the forecast track, the center of Lorenzo is expected to pass near the western Azores early on Wednesday.

Maximum sustained winds are near 105 mph (165 km/h) with higher gusts.  Some weakening is forecast during the next 48 hours, but Lorenzo is forecast to remain a large and powerful hurricane while it passes near the Azores.

Key messages for Lorenzo can be found in the Tropical Cyclone Discussion under AWIPS header MIATCDAT3 and WMO header WTNT43 KNHC and on the web at www.hurricanes.gov/text/MIATCDAT3.shtml

RAINFALL:  Lorenzo is expected to produce total rain accumulations of 2 to 4 inches over much of the western Azores and around 1 inch over the central Azores Tuesday and Wednesday.  This rainfall could cause life-threatening flash flooding in the western Azores.

SURF:  Swells generated by Lorenzo are spreading across much of the North Atlantic basin.  These swells are likely to cause life-threatening surf and rip current conditions.  Please consult products from your local weather office.

Next complete advisory at 1100 AM AST.

About the Saffir-Simpson Hurricane Wind Scale

The Saffir-Simpson Hurricane Wind Scale is a 1 to 5 rating based on a hurricane's sustained wind speed. This scale estimates potential property damage. Hurricanes reaching Category 3 and higher are considered major hurricanes because of their potential for significant loss of life and damage. Category 1 and 2 storms are still dangerous, however, and require preventative measures. In the western North Pacific, the term "super typhoon" is used for tropical cyclones with sustained winds exceeding 150 mph.

Very dangerous winds will produce some damage: Well-constructed frame homes could have damage to roof, shingles, vinyl siding and gutters. Large branches of trees will snap and shallowly rooted trees may be toppled. Extensive damage to power lines and poles likely will result in power outages that could last a few to several days.

Extremely dangerous winds will cause extensive damage: Well-constructed frame homes could sustain major roof and siding damage. Many shallowly rooted trees will be snapped or uprooted and block numerous roads. Near-total power loss is expected with outages that could last from several days to weeks.

Devastating damage will occur: Well-built framed homes may incur major damage or removal of roof decking and gable ends. Many trees will be snapped or uprooted, blocking numerous roads. Electricity and water will be unavailable for several days to weeks after the storm passes.

Catastrophic damage will occur: Well-built framed homes can sustain severe damage with loss of most of the roof structure and/or some exterior walls. Most trees will be snapped or uprooted and power poles downed. Fallen trees and power poles will isolate residential areas. Power outages will last weeks to possibly months. Most of the area will be uninhabitable for weeks or months.

Catastrophic damage will occur: A high percentage of framed homes will be destroyed, with total roof failure and wall collapse. Fallen trees and power poles will isolate residential areas. Power outages will last for weeks to possibly months. Most of the area will be uninhabitable for weeks or months.

Cat 5 hurricane unprecedented for being so far north, east