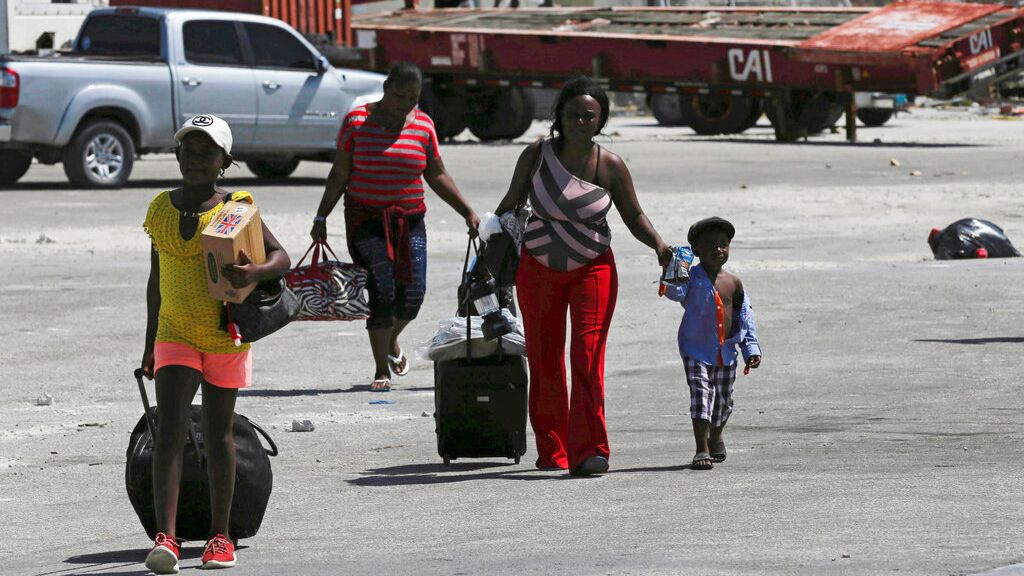 Evacuees carry their belongings as they walk to a ferry to depart for Nassau in the aftermath of Hurricane Dorian, at the port of Marsh Harbor, Abaco Island, Bahamas, Sunday, Sept. 8, 2019. It's been nearly a week after disaster roared in from the sea as the most powerful hurricane in the northwestern Bahamas' recorded history. (AP Photo/Fernando Llano)

Thousands of hurricane survivors are filing off boats and planes in the capital of the Bahamas, facing the need to start new lives after Hurricane Dorian but with little ideas on how or where to begin.

Some sat in hotel lobbies as they debated their next steps. Others were bused to shelters jammed to capacity. Some got rides from friends or family who offered a temporary place to stay on New Providence, an island of some 13,000 residents that has never seen so many people arrive on its shores in recent history.

Carla Ferguson, a 51-year-old resident of Treasure Cay, walked out of a small airport in Nassau with her daughter and other relatives late Monday afternoon and looked around as the sun set.

Ferguson and her family had one large duffel bag and three plastic storage boxes, most of them stuffed with donated clothes they received before leaving their tiny, devastated island.

"No one deserves to go through this," said her daughter, 30-year-old Dimple Lightbourne, blinking away tears.

The government has estimated that up to 10,000 people from the Abaco islands alone, including Treasure Cay, will need food, water and temporary housing as officials consider setting up tent or container cities while they clear the country's ravaged northern region of debris so people can eventually return.

Getting back to Abaco is the dream of Betty Edmond, a 43-year-old cook who picked at some fries Monday night while with her son and husband in a restaurant at a Nassau hotel, where her nephew is paying for their stay.

They arrived in Nassau on Saturday night after a six-hour boat trip from Abaco and plan to fly to South Florida on Wednesday, thanks to plane tickets bought by friends who will provide them a temporary home until they can find jobs. But the goal is to return, Edmond said.

"Home will always be home," she said. "Every day you wish you could go back."

"You try to keep your hopes up, but ...," she added, her voice trailing off as she shook her head.

The upheaval, however, was exciting to her 8-year-old son, Kayden Monestime, who said he was looking forward to going to a mall, McDonald's and Foot Locker.

Instead of starting school Monday, as had been scheduled before the Category 5 storm hit, Monestime spent the day accompanying his parents to the bank and a shelter as they prepared for the move to the U.S.

Also flying to Florida was 41-year-old Shaneka Russell, who owned Smacky's Takeaway, a takeout restaurant known for its cracked conch that opened in 2005 and was named after the noises her son made as a baby. Russell's mother once ran the place, which was destroyed by Dorian.

Russell said good Samaritans had taken her and a group of people into their home over the weekend and found them a hotel room in Nassau for a couple of days.

"To know that we were going to a hotel, with electricity and air conditioning and a proper shower, I cried," she said. "I've never been through anything like this in my life."

Dorian slammed into Great Abaco and Grand Bahama islands a week ago as one of the strongest Atlantic hurricanes ever, killing at least 44 people, with emergency workers saying they expect to find more victims.

Members of the Gainesville, Florida, fire department were checking the ruins of The Mudd, the Bahamas' largest Haitian immigrant community on Great Abaco.

"We've probably hit at most one-tenth of this area, and so far we found five human remains," said Joseph Hillhouse, assistant chief of Gainesville Fire Rescue. "I would say based off of our sample size, we're going to see more."

After U.S. teams recovered some bodies, Bahamas police and medical authorities moved in to conduct autopsies and fly the bodies south to Nassau.

"There are still more bodies," said Genoise Arnold, a resident of The Mudd, who knew of at least three neighbors killed during the storm.

Arnold said one neighbor clung to a tree during Dorian and succumbed to flood waters that surged through the low-lying neighborhood. Others were caught under their homes when winds turned the structures into splinters, leaving the cowering residents exposed, he said.

The huge debris piles left by the storm are challenging for search and recovery teams, which cannot use bulldozers or other heavy equipment to search for the dead. That makes recovery and identification a slow process.

At least five deaths have been blamed on the storm in the southeastern United States and one in Puerto Rico.

Lightbourne, the Abaco resident now in Nassau, said she couldn't wait to escape the disaster Dorian left behind.

"I don't want to see the Bahamas for a while. It's stressful," she said. "I want to go to America. ...This is a new chapter. I've ripped all the pages out. Just give me a new book to fill out."

The Latest: Dorian death toll rises to 44 in Bahamas