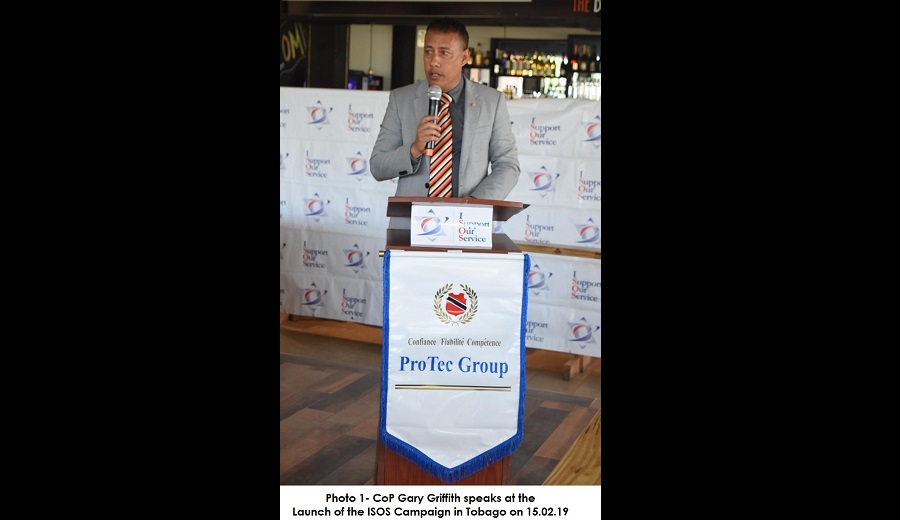 Police Commissioner Gary Griffith launched the I Support Our Service (ISOS) campaign in Tobago on Friday.

Commissioner Griffith spoke of the benefits of the ISOS programme, not only to the officers benefitting, but also the communities where they live. He said the programme has demonstrated its ability to effectively boost morale among officers, contributing to greater productivity in the execution of their duties.

He addressed members of the Tobago business community who gathered at Apex Lounge, Canaan, in support of the ISOS initiative. He said working together with the TTPS will help to create a better Tobago.

The Top Cop reiterated his assurance that the support provided through the ISOS initiative will effect positive change, assisting the Police Service to become T&T’s finest. He also stated that the ISOS is playing a major role in turning around the image of and the transformation of the Police Service.

Commissioner Griffith also applauded the Tobago Division Executive for the manner in which the Police Stations on the island are run and kept. He praised their efforts and said it was something he wanted to pattern for the other 72 Police Stations in the country.

Meanwhile, also speaking at the launch was general manager of ANSA McAL, Tobago, David Lum Kong, who encouraged the Tobago business community to be a part of the ISOS initiative. He urged Tobagonians to show their respect for police officers who place their lives on the line daily to protect and serve Trinidad and Tobago.