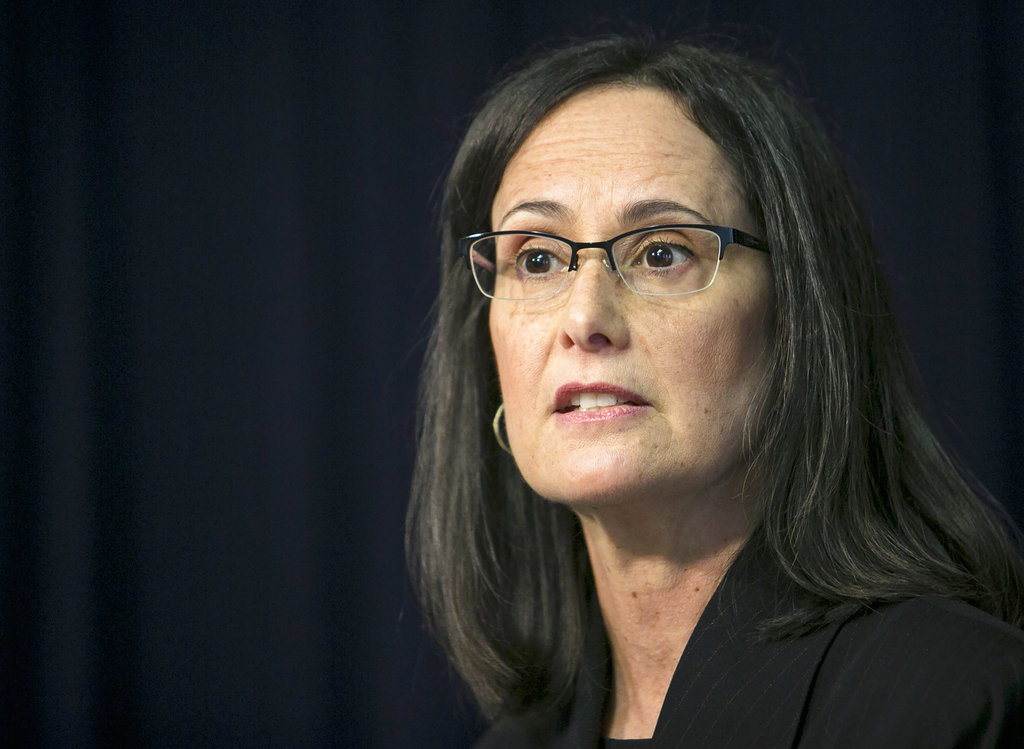 In a Monday, April 23, 2018 file photo, Illinois Attorney General Lisa Madigan outlines a federal lawsuit her office filed against Champaign, Ill.-based Suburban Express Inc., and owner Dennis Toeppen accusing it of discriminating and harassing customers and their families, during a news conference in Chicago. (Ashlee Rezin/Chicago Sun-Times via AP, File)

Illinois Attorney General Lisa Madigan on Wednesday issued a blistering report about clergy sexual abuse, saying that Catholic dioceses in Illinois has not released the names of at least 500 clergy accused of sexually abusing children.

The preliminary report found that the church's six archdioceses have done a woefully inadequate job of investigating allegations and in some cases did not investigate them at all or notify the state's child welfare agency. Madigan's office said that while the dioceses have disclosed 45 more names of those credibly accused, the total number of names disclosed is only 185 and raises questions about the church's response to the crisis.

"By choosing not to thoroughly investigate allegations, the Catholic Church has failed in its moral obligation to provide survivors, parishioners and the public a complete and accurate accounting of all sexually inappropriate behavior involving priests in Illinois," Madigan said in a statement. "The failure to investigate also means that the Catholic Church has never made an effort to determine whether the conduct of the accused priests was ignored or covered up by superiors."

The report does not include some key details such as when the allegations were made. It also does not accuse the dioceses of withholding the names of 'credibly" accused clergy, only that the list of names of accused clergy is far longer than has been made public.

A Madigan spokeswoman said that the allegations date back decades and include some priests who are now deceased.

The Illinois disclosures are a new blow to the credibility of the church, which has struggled to contain the scandal amid mounting accusations of negligence. In August, a Pennsylvania grand jury report alleged that hundreds of priests abused at least 1,000 children over seven decades in that state. The report prompted Pope Francis to call U.S. bishops for a retreat at a suburban Chicago seminary next month to debate how to respond.

Larry Antonsen, a Chicago leader of Survivors Network of those Abused by Priests, said Madigan is doing the right thing and needs to continue. He said Illinois should convene a grand jury with subpoena power, as in Pennsylvania.

"There's more that needs to be done. The Catholic Church does not do a good job of policing itself, and you can't expect them to do that," Antonsen said. "It's hard to know what to believe because so much of what they're doing is in secret and not out in the open, but this is a step in the right direction."

A leading attorney who has represented survivors of abuse called for the additional names of priests to be made public.

"The Illinois Bishops must release these names immediately so that survivors can heal and no other kids are harmed," said Minneapolis-based Jeff Anderson.

Madigan's office said the problems went beyond a lack of effort. In some cases, the report found, efforts were made to work against the accusers.

"When the Illinois Dioceses investigated an allegation, they frequently found reasons not to deem an allegation 'credible' or 'substantiated,'" according to the report. Not only did Madigan's office find a "pattern" of dioceses failing to substantiate allegations that came from one person, "The dioceses also often found reasons to discredit survivors' stories of abuse by focusing on the survivors' personal lives."

Illinois church leaders expressed regret about the abuse, but pointed to steps they have taken to address what has become an international crisis.

Chicago's archbishop, Cardinal Blase J. Cupich, in a statement said that although he regretted "our failures to address the scourge of clerical sexual abuse," the archdiocese has been a leader in dealing with the issue, including a policy since 2002 of reporting "all allegations of child sexual abuse to civil authorities."

The Springfield diocese said that it reviewed paper files of clergy dating to its 1923 founding and provided Madigan's office with documentation of each instance of abuse, regardless of whether it was deemed credible, according to a statement.

The Diocese of Joliet said in a statement that it took steps such as establishing in 1993 a review committee made up of people from law enforcement, social service agencies and others to investigate allegations of sexual abuse.

Madigan said her office's findings make it clear that notifying authorities is critical, and pointing to instances when dioceses used personal information about people to discredit them and help them conclude accusations weren't credible. "The preliminary stages of this investigation have already demonstrated that the Catholic Church cannot police itself," she said.