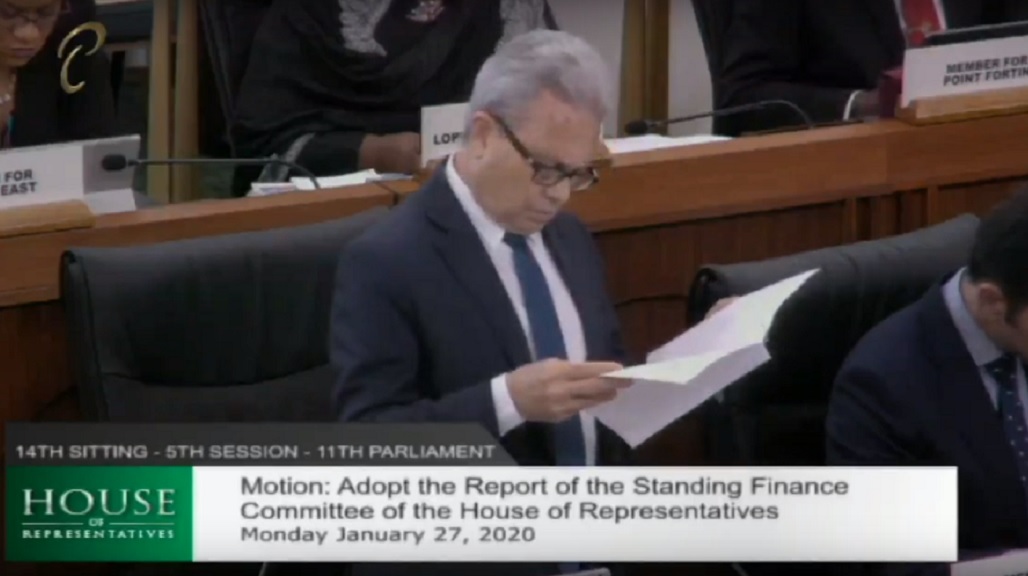 Finance Minister Colm Imbert said a write-off of over $7 million on various heads of expenditure is a routine matter.

Imbert was speaking in Parliament regarding a Motion to Adopt the Report of the Standing Finance Committee of the House of Representatives.

He said the Standing Finance Committee met and agreed to a variation of the appropriation and to the write-off of losses for fiscal 2019.

He said the Committee noted the transfer of funds amounting to $7,125,446.73 for the payment of salaries to teachers and retired staff at various ministries, among other expenses.

He said the Standing Finance Committee agreed to a write-off of losses totalling $7,125,446.73 on the various heads of expenditure including the Ministry of Finance, Ministry of Education, Ministry of Rural Development and Local Government.

“These sums represent overpayment of salaries and cost of living allowance to retired staff at the above-named ministries.

“I want to reiterate that contained within these write-offs of overpayment of salaries and COLA to retired staff were write-offs to approximately 1,000 teachers and other members of staff,” he said.

Imbert also noted that Rajkumar Bhagaloo, a PNM candidate in last year’s Local Government Elections, was one of the teachers paid. He added that these matters are dealt with by the Finance Ministry when sent by the Auditor General.

“I am happy to sort this matter for Mr Bhagaloo which has been outstanding since 2011. We are happy to settle this matter…for 1,000 teachers…regardless of their political persuasion,” he said.

Imbert said the transfer of funds between sub-heads under the same head of expenditure had been approved by Cabinet since 1988.

- requests for transfer of funds between separate sub-heads under the same head of expenditure should no longer be submitted for the Cabinet but can be decided by the Minister of Finance on the advice of the Budget Division.”

“This relieved the Cabinet of a tremendous amount of paperwork. Prior to that transfers between sub-heads, in other words, a head of expenditure is a ministry, a subhead would be an item within the appropriation for that ministry. Prior to 1988 all transfers between sub-heads within a ministry had to go cabinet but in 1988 this was delegated to the Minister of Finance.”

“What happens is that a Ministry requires to make a payment, they may not have sufficient funds…they would simply look in the various sub-heads and…make an appropriate application to the Minister of Finance…it’s a routine matter,” he said.

Imbert said for 2019, his Ministry approved the transfer of funds amounting to approximately $1.3 billion.

“The Minister of Finance approved the transfer of funds $1,310,034,704 between subheads of the same head of expenditure for fiscal 2019.”

“This is standard practice…these transfers are approved by whoever is the Ministry of Finance based on notes from the respective Ministers requesting the transfer.”

“These transfers are necessary, reflecting changed circumstances in the Ministries and departments and the consequential re-ordering of priorities which does not increase the total appropriation in any way,” he said.

He said statements showing the transfers approved by the Minister of Finance and explanations were attached to the agenda for the Finance Committee Meeting and provided to members of the House.

He said the Committee also noted a transfer of funds among sub-heads under the same head of expenditure for fiscal 2019.

He said the variation of appropriation of resources in the sum of $255,369,874 was necessary in order to provide additional funds to bring to account debit advices for December 2018 – September 2019 to meet a payment of interest on overdraft with the Central Bank.

Imbert said the Committee proposed an increase in heads of expenditure for this amount, and a corresponding decrease for the same figure, resulting in a net effect of nil.

Imbert 'amazed' by $2.4B from tax amnesty