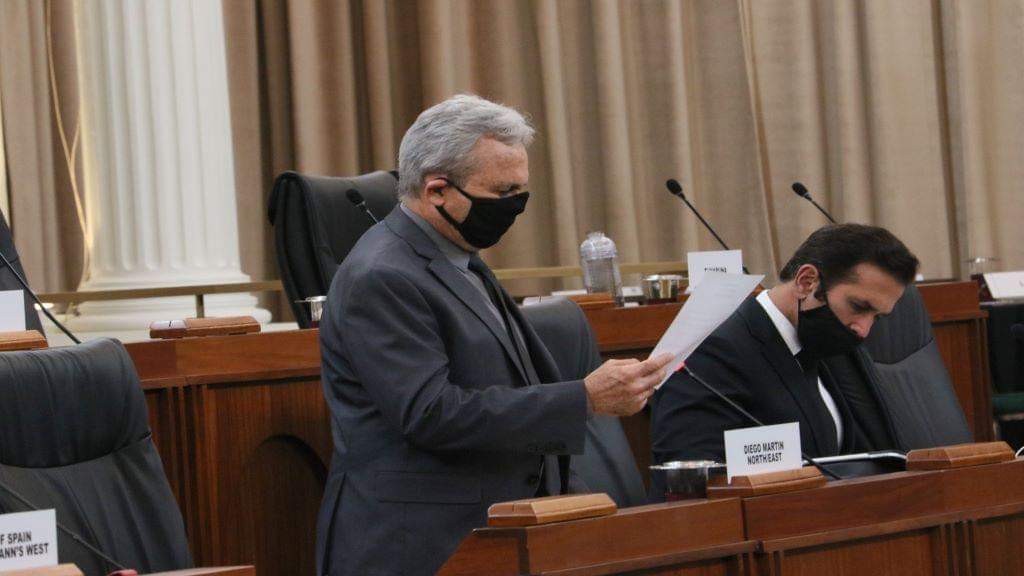 Photo courtesy the Parliament of Trinidad and Tobago

The price on which the country's budget is based has been revised for the second time this year, in light of a drastic fall in global oil prices brought about by the COVID-19 pandemic.

The figures were last revised on March 10.

Addressing the Parliament on Monday, Finance Minister Colm Imbert announced that the 2019/2020 budget is now pegged at an oil price of US$25 a barrel for the rest of the year, (adjusted from $US40) and $1.80 per MMBTU for natural gas.

Imbert also revised the fiscal deficit which was originally estimated at $5.3 billion, and is now expected to expand to $15.5 billion, $10.2 billion higher than was envisaged.

"In calculating this revised deficit, we have taken note of the fact that the collapse of the price of WTI oil to 1 US cent per barrel last week is having an adverse effect on other oil prices. For example, Brent oil, which is closer in price to our local crude than WTI, has dropped to $20. Such low prices were previously undreamt of."

The Finance Minister explained that this results in a projected loss of revenue in fiscal 2020 of $9.2 billion, to which must be added another net $1 billion in extraordinary expenditure.

The Finance Minister said $65 million has already been spent by the Ministry of Social Development and Family Services on COVID-19 relief measures.

These measures, he said include over $25
million worth of food cards distributed to Members of Parliament to assist parents for a three-month period, whose children would normally receive meals through the school feeding programme, and for other needy persons in their constituencies.

The Finance Minister said a financial support programme for an initial period of three months at a cost of approximately $4.5 billion is providing a safety net for vulnerable households and businesses.

Imbert added that over 75,000 households, comprising over 200,000 nationals of Trinidad have benefitted from additional social support measures implemented by the Ministry of Social Development.

He said the Ministry is currently processing applications for Income Support Grants of up to $1,500 per month per household, for persons who are outside of the NIS and BIR systems who have lost their jobs or incomes as a result of COVID-19.

He said it is expected that these social support measures will cost up to $200 million for the period up to July 2020.

Grants totaling $10 million per month for three months, May, June and July will be given to religious bodies in proportion to the size of their congregations for them to distribute food to the poor and needy in accordance with their existing procedures and programmes.

Imbert said this will cost $30 million.

He said a further $10 million per month for food support will be given to the Ministry of Rural Development and Local Government for distribution within the 14 Municipal Regions in Trinidad, for the months of May, June and July at a cost of a further $30 million.

Emphasis, he said in these food support programmes will be placed on the supply of fresh produce, as well as traditional processed foods.

Imbert said that as of March 24, 30,300 applications for Salary Relief Grants
had been received.

He said the first batch of grants have been processed and authorized.

Payments, he said should begin soon.

"I am pleased to report that although only two weeks have elapsed since we began to receive applications at TTPost outlets, we have processed and authorized the first batch of 1,000 salary relief grants. If all goes according to plan, these grants will be wired to recipients tomorrow and arrive in the bank accounts by Wednesday."

The Finance Minister said in March over 3,800 VAT refund payments in cash were made to businesses with outstanding arrears of $250,000 per VAT period or less, at a cost of $260 million.

He said last week a decision was made to pay out a further $200 million in cash in VAT refunds to businesses owed between $250,000 and $500,000 per VAT period, bringing the total of VAT refunds paid out in cash within a period of 4 weeks to $460 million.

He said the residual VAT arrears are being settled through the imminent issuance of $3 billion in interest bearing VAT bonds as a result of the recent amendment of the Value Added Tax Act.

Between VAT refunds and income tax refunds, Imbert said $700 million in cash was paid out in a two-month period.

Imbert said the Tobago House of Assembly (THA) will be given $50 million to aid in its COVID-19 efforts.

"And we have not left out Tobago. We are sending $50 million to the THA for the TRHA and other COVID-19 related expenses and a further $5 million for their enterprise development programme to help small businesses."

Imbert said Government is also making available a Special Fund of $50 million to provide grants to Tobago hoteliers for hotel upgrade and refurbishment, so that when hotels.

Imbert said the Ministry initiated a wire transfer of funds on Monday in the amount of TT$2,000 or US$300 to Trinidad and Tobago students at the UWI campuses at Mona, Jamaica and Cavehill, Barbados, who are not on national scholarships to assist them with the purchase of food in April and May, in the first instance.

He national scholars at the two campuses have already received their personal maintenance allowances through the Unit Trust facility up to May and in several cases up to June.