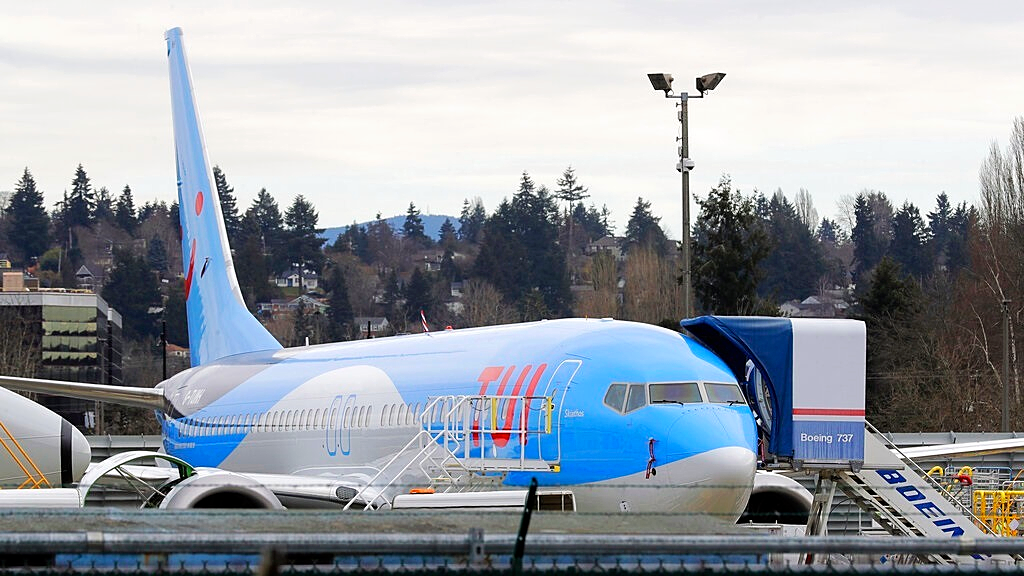 In this photo taken Monday, March 11, 2019, a Boeing 737 MAX 8 airplane being built for TUI Group sits parked at Boeing Co.'s Renton Assembly Plant in Renton, Wash. Britain, France and Germany on Tuesday joined a rapidly growing number of countries grounding the new Boeing plane involved in the Ethiopian Airlines disaster or turning it back from their airspace, while investigators in Ethiopia looked for parallels with a similar crash just five months ago. (AP Photo/Ted S. Warren)

Although Imbert, acting as Prime Minister while Prime Minister Dr Keith Rowley is in the US for medical tests, did not answer phone calls or respond to messages, he Tweeted that government takes flight safety seriously and would heed the advice of recognised aviation authorities and not 'uninformed amateurs'.

"Government takes air safety very seriously and follows advice on the airworthiness of aircraft from recognised aviation authorities, both local and foreign, such as the CAA (Civil Aviation Authority) and FAA (Federal Aviation Administration) and not from uninformed amateurs," he said.

Imbert shared an article published March 12, 2019, by the Insurance Journal which reported that the US Federal Aviation Administration (FAA) said there is no 'conclusive evidence' that the Ethiopian Airlines tragedy and a fatal Lion Air disaster involving the same jet model in October 2018, are linked.

The Tweet comes after questions were raised regarding Caribbean Airlines decision to purchase Boeing 737 Max 8 aircraft, the first of which was due to arrive by December 2019.

In a statement issued Tuesday, Imbert said that if the model is found to be unsafe, CAL has ample time to make alternative arrangements.

He added that CAL is not currently flying the aircraft so there was no need to panic, adding that CAL's current fleet is comprised of Boeing 737-800s, which are among the safest airplanes in the world.

The crash, which occurred six minutes after takeoff Sunday, was the second involving a Max 8 plane in just five months. Airline pilots on at least two U.S. flights have reported that an automated system seemed to cause their planes to tilt down suddenly.

The FAA said it has not yet been provided with any data to draw conclusions or take actions.

A growing number of airlines and countries around the world have since grounded Boeing 737 Max jets or banned them from their airspace.

The European Aviation Safety Agency has issued a directive grounding all 737 Max 8 and Max 9 aircraft. EASA said in its emergency airworthiness directive Tuesday that "at this early stage" of the most recent investigation, "it cannot be excluded that similar causes may have contributed to both events."

It said "based on all available information, EASA considers that further actions may be necessary to ensure the continued airworthiness of the two affected models." It said companies may make one noncommercial flight to return their planes to a location where they can be inspected. The grounding applies to all European Union airspace.

Australia has announced a temporary ban on flights by 737 Max aircraft, although none of its airlines currently operate them. The Civil Aviation Safety Authority said Tuesday that the ban will affect two foreign airlines — SilkAir and Fiji Airways — that use them for flights to Australia.

Brazil's Gol Airlines has suspended the use of seven Max 8 jets. The airline said it is following the investigation closely and hopes to return the aircraft to use as soon as possible.

Canadian charter airline Sunwing has suspended use of its four 737 Max 8 planes. Canadian Transport Minister Marc Garneau said he has no plans to ground Canada's fleet of 737 Max aircraft, but that "all options are on the table."

China has 96 Max 8 jets in service, belonging to carriers such as Air China, China Eastern Airlines and China Southern Airlines. The civil aviation authority directed the planes to be grounded indefinitely on Monday. It said the order was "taken in line with the management principle of zero tolerance for security risks."

There were eight Chinese citizens on the Ethiopian Airlines flight that crashed shortly after taking off on Sunday.

India has grounded all 737 Max 8 planes. A statement late Tuesday said the planes "will be grounded till appropriate modifications and safety measures are undertaken to ensure their safe operations."

Singapore has also temporarily banned Max 8 jets — and other models in the Max range — from entering and leaving the country.

Meanwhile, Comair, the operator of British Airways and Kulula flights in South Africa, has grounded its Max 8 while it consults with Boeing, other operators and technical experts.

The United States, where Boeing is based, is one of the few remaining operators of the plane.

Boeing has said it has no reason to pull the popular aircraft from the skies and does not intend to issue new recommendations about the aircraft to customers.

Some aviation experts have warned that finding answers in this crash could take months.

Information void in plane crash leads many to take action