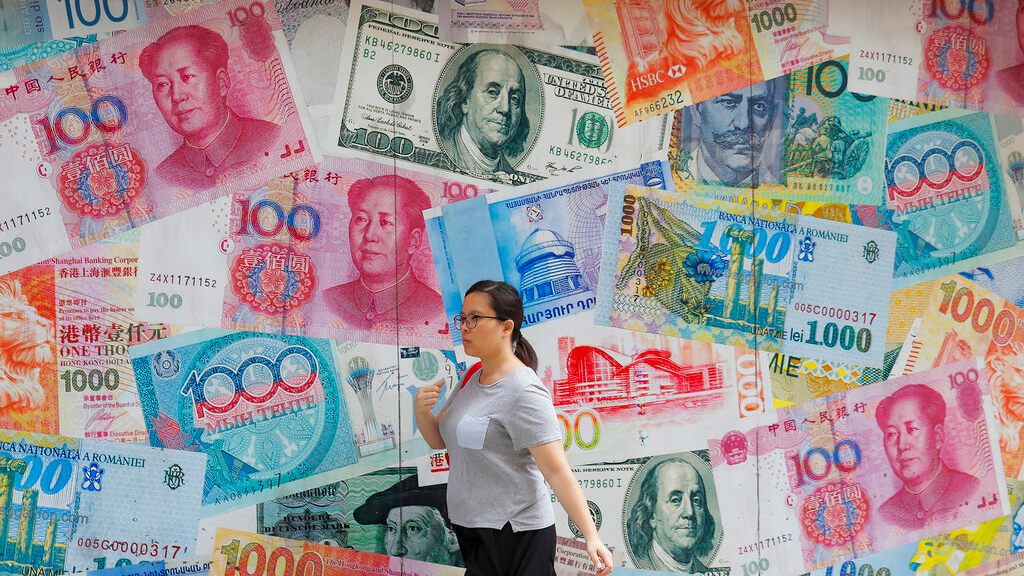 FILE - In this Aug. 6, 2019, file photo, a woman walks by a money exchange shop decorated with different countries currency banknotes at Central, a business district in Hong Kong. The IMF’s latest World Economic Outlook comes on the eve of meetings in Washington this week of the IMF and its sister lending organisation, the World Bank. (AP Photo/Kin Cheung, File)

The International Monetary Fund is further downgrading its outlook for the world economy, predicting that growth this year will be the weakest since the 2008 financial crisis, primarily because of widening global conflicts.

The IMF's latest World Economic Outlook released Tuesday foresees a slight rebound in 2020 but warns of threats ranging from heightened political tensions in the Middle East to the threat that the United States and China will fail to prevent their trade war from escalating.

The updated forecast was prepared for the fall meetings this week of the 189-nation IMF and its sister lending organisation, the World Bank. Those meetings and a gathering Friday of finance ministers and central bankers of the world's 20 biggest economies are expected to be dominated by efforts to de-escalate trade wars.

The new forecast predicts global growth of three percent this year, down 0.2 percentage point from its previous forecast in July and sharply below the 3.6 percent growth of 2018. It would be the weakest year since global growth was a negative 0.1 percent in 2009 as the global economy struggled with the shockwaves from the 2008 financial crisis.

For the United States this year, the IMF projects a modest 2.4 percent gain, down from 2.9 percent in 2018.

Next year, the fund foresees a rebound for the world economy to 3.4 percent growth but a further slowdown in the United States to 2.1 percent, far below the three percent growth the Trump administration projects.

IMF economists cautioned that even its projected modest gains might not be realised.

"With a synchronised slowdown and uncertain recovery, there is no room for policy mistakes, and an urgent need for policymakers to cooperatively de-escalate trade and geopolitical tensions," Gita Gopinath, the IMF's chief economist, said.

Last week, the United States and China reached a temporary cease-fire in their trade fight when President Donald Trump agreed to suspend a tariff hike on $250 billion of Chinese products that was to take effect this week. But with no formal agreement reached and many issues yet to resolved, further talks will be needed to achieve any meaningful breakthrough. The Trump administration's threat to raise tariffs on an additional $160 billion in Chinese imports on December 15 remains in effect.

The IMF's forecast predicted that about half the increase in growth expected next year will result from recoveries in countries where economies slowed significantly this year, as in Mexico, India, Russia and Saudi Arabia.

The global economy will also get a boost from recoveries or at least more shallow recessions in various stressed emerging market economies such as Turkey, Argentina and Iran. The report said that the expected rebound would represent a modest bounceback after steep economic declines this year.

This year's slowdown, the IMF said, was caused largely by trade disputes, which resulted in higher tariffs being imposed on many goods. Growth in trade in the first half of this year slowed to one percent, the weakest annual pace since 2012.

Kristalina Georgieva, who will preside over her first IMF meetings after succeeding Christine Lagarde this month as the fund's managing director, said last week that the various trade disputes could produce a loss of around $700 billion in output by the end of next year or about 0.8 percent of world output.

IMF economists said one worrisome development is that the slowdown this year has occurred even as the Federal Reserve and other central banks have been cutting interest rates and deploying other means to bolster economies.

The IMF estimated that global growth would have been about one-half percentage point lower this year and in 2020 without the central banks' efforts to ease borrowing rates.

"With central banks having to spend limited ammunition to offset policy mistakes, they may have little left when the economy is in a tougher spot," Gopinath said.

In addition to trade and geopolitical risks, the IMF envisions threats arising from a potentially disruptive exit by Britain from the European Union on Oct. 31. The IMF urged policymakers to intensify their efforts to avoid economically damaging mistakes.

"As policy priorities go, undoing the trade barriers put in place with durable agreements and reining in geopolitical tensions top the list," Gopinath said. "Such actions can significantly boost confidence, rejuvenate investment, halt the slide in trade and manufacturing and raise world growth."

The IMF projected that growth in the 19-nation euro area will slow to 1.2 percent this year, after a 1.9 percent gain in 2018. It expects the pace to recover only slightly to 1.4 percent next year.

Growth in Germany, Europe's biggest economy, is expected to be a modest 0.5 percent this year before rising to 1.2 percent next year.

China's growth is projected to dip to 6.1 percent this year and 5.8 percent next year. These would be the slowest rates since 1990, when China was hit by sanctions after the brutal crackdown on pro-democracy demonstrators in Beijing's Tiananmen Square.

For Japan, the IMF expects growth of just 0.5 percent next year. It foresees an expansion in Russia of 1.9 percent, up from 1.1 percent this year.

And Mexico is forecast to experience growth of 1.3 percent next year, far better than the lackluster 0.4 percent gain envisioned for this year.