Immigrants touched by Mexico quake, try to help from afar 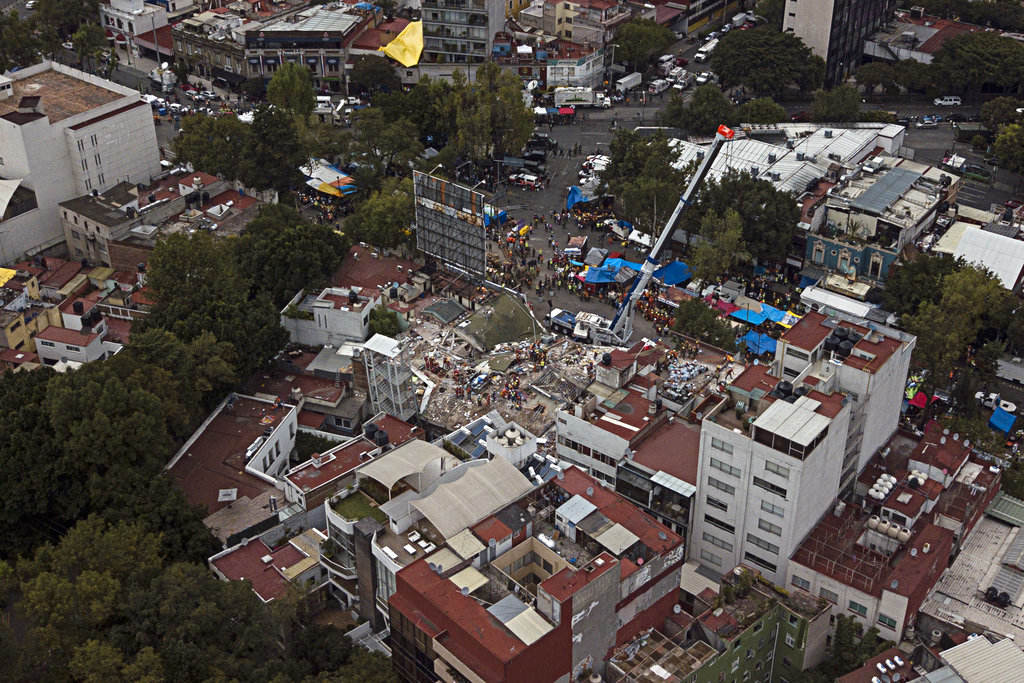 Rescue workers race against the clock to reach possible survivors trapped inside the office building on Alvaro Obregon Avenue in the Roma Norte neighborhood of Mexico City, at sunrise on Saturday, Sept. 23, 2017. A strong new earthquake shook Mexico on Saturday morning, causing street signs around the collapsed building to sway and rescue workers to evacuate the site temporarily. (AP Photo/Miguel Tovar)

When Luis Ramirez finally reached his mother after the powerful Mexico earthquake, he learned her home was so badly damaged that it had to be demolished.

He considered getting on a plane from New York to help her find a new home, but it was too risky now that the program that has been shielding him from deportation is being phased out. He tried to send money, but the usual courier that he uses shut down because of the damage from the 7.1-magnitude quake in his home state of Morelos.

"The situation is eating me alive because you can't do anything," he said about sending help to his mother from New York City.

The earthquake that killed nearly 300 people and destroyed dozens of buildings in Mexico set off a frantic response in communities around the U.S. as people desperately try to connect with their loved ones, figure out ways to send emergency help, money and goods as well as raise funds for smaller towns around the capital they say are receiving less help from the government. Those in the country illegally wish they could travel to help their loved ones cope with the aftermath but are afraid they wouldn't be able to return.

"We saw people desperately trying to connect with their families. Lines were down. They couldn't think of other ways to find their relatives," said Ana Flores, who heads an office for the Mexican state of Puebla in Passaic, New Jersey. "We have gone through all of the feelings from anxiety, to anguish and now trying to find all the support we can."

Traditionally a month of parties for Mexicans who celebrate the country's independence from Spain, September has dealt one blow after another. It started with the aftermath of Hurricane Harvey in Houston, which has the third-largest population of Mexicans in the U.S. Then on Sept. 5, President Donald Trump announced his decision to phase out the Deferred Action for Childhood Arrivals program that shielded from deportation nearly 800,000 immigrants — the great majority from Mexico — brought to the U.S. as children. Another earthquake struck in Mexico's southern coast on Sept. 7, killing at least 90 people.

Tuesday's earthquake has Mexicans in the U.S. glued to their televisions and their phones trying to get specific news from their local towns to help their families.

Monica Dominguez, who lives in Huntington Beach, California, had been calling childhood friends who now work for Mexico's Civil Protection trying to pull strings to move the construction rubble from her grandparents' home in the town of Yautepec south of Mexico City so her family can go out to the street. The old house where she lived when she was 5 collapsed when the wooden beams cracked, leaving it in ruins.

"All they were able to get out of there were some couches where they have been sleeping in the back. They have power but they are running out of food," she said. "There are so many of us with similar stories of suffering."

In Las Vegas, Luis Ramon Corona-Rizo is helping collect funds among friends and hosting a car wash to raise money to send back home. Corona-Rizo says his parents and sister survived the quake and offered to use the money he sends to buy medicines and take them to a collection center.

"A lot of people don't trust the government in Mexico, so I'm going to send the money to my family," he said.

A grocery store chain in Las Vegas that caters to the area's Hispanic community is also hosting a fundraiser this weekend at one of its shops where it will have local bands and sell tacos and donate proceeds to the Mexican Red Cross. In Miami, a group is hosting a Day of the Dead arts and crafts event for families and sending money from ticket sales to the Topos, a group of rescue workers who emerged after the 1985 earthquake killed thousands in Mexico. In San Diego, the chambers of commerce in the San Ysidro and Otay Mesa border communities launched a drive to collect donated goods and fly them to Mexico City on a private plane. The Mexican customs agency is waiving duties.

"Many of our employees have relatives and friends who were affected by the earthquake," said Ruben Anaya, chief operations officer of Mariana's Supermarkets in Las Vegas. "It is our duty as human beings to help when tragedies like the one that just happened in Mexico occur. Many of the videos we've watched are horrible."

The quake happened around the same time as Hurricane Maria ravaged Puerto Rico, and Mexican immigrants are joining efforts in places such as New York City where Puerto Ricans are also in distress.

Both Univision and Telemundo broadcasters are also producing television specials this weekend with actors, singers and news anchors to help raise funds for those affected by the earthquake and hurricanes Harvey, Irma and Maria in Texas, Florida and Puerto Rico.

For immigrants like Ramirez, sending money is a race against time. His mother is confined to a room on her property that — unlike her home — the authorities have not condemned. Her poor health makes it impossible for her to wait in line for relief services, so Ramirez is hoping to send her money via wire transfer from his savings so she can get food and supplies at the store and find a new place to live, but so far it hasn't been easy.

"She waited five hours at this place with so many other people waiting for money transfers to help them get by, only to hear that the funds could not go through," he said. "She went back home empty-handed and crying."