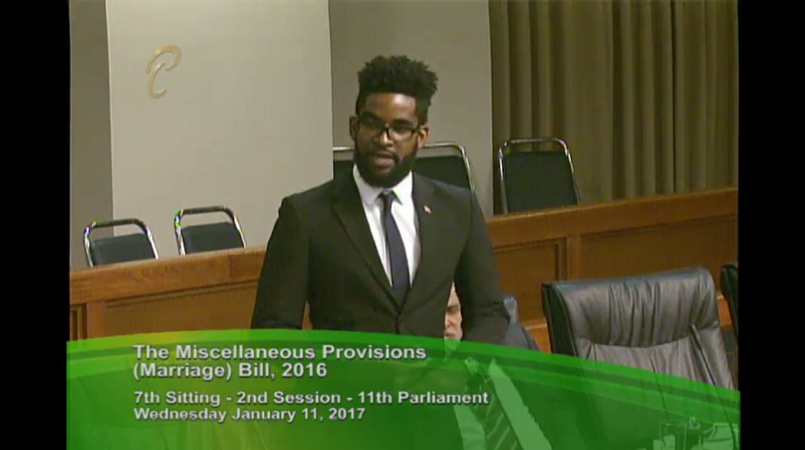 Temporary independent senator and youth advocate, Nikoli Edwards, says that the act of child marriage is a form of slavery as it often involves marriage between a child and an individual much older than them.

Speaking in the Parliament on Wednesday regarding The Miscellaneous Provisions (Marriage) Bill 2016, Edwards, 25, who is the country’s youngest senator to date, said it is a violation of the rights of a child to place them, as husband or wife, in charge of a household before they have learned to be adults.

Further, he chastised Opposition Senator Rodger Samuels for judging young people without allowing them to be heard.

“At that age (under 18) do you think it is love, that a child could understand the meaning of love with this older individual who is coming to rob them of their innocence? That isn’t love, that is slavery.”

“I would really want to find out if the persons who are advocating for the legislation to stay the same, if they in fact would allow their children to be married at the age of 12 and 14.”

“Having to take care of a wife, children, it requires a lot of time, attention and resources, and quite frankly a 12-year-old, a 14-year old, a 16-year-old is in no position whatsoever to take care of a family.”

“It is extremely troubling to think that a 12-year-old moves from an area where they are treated as a child to a situation where they have to take care of a household. The fact is, times have changed.”

“In today’s world where we have young people who are much more progressive, who want to be independent but not be robbed of that independence immediately, it provides room for growth.”

“At the age of 12 and 14, no one should be placed in a situation where they are tossed into a responsibility that they themselves do not know (about), or (are unable) to cope with.”

“When the comment came from Senator Samuel, with relation to ‘youth following the devil and not the Lord’, I took personal offence.”

“That is the perception of young people in today’s society that we are wayward, that we don’t understand what we want and cannot make choices on our behalf and that is not true.”

“We keep looking at the bad in young people, not realising that they themselves have a voice and deserve to be heard.”

“If you walk out of these doors and you ask any young person what their thoughts are, I’m sure it would be that it (marriage age) should be 18 and over.”

Opposition senator Rodger Samuel argued that raising the marriage age as a reflection of maturity is questionable given the rising divorce rate, showing that some individuals may be older, but not more mature.

“How do we level the field? How do we rate the level of maturity? What is suitable when it comes to the age limit? There are also serious issues with marriages over a certain age…the numbers in (the rate of) divorce is ridiculous,” he said, citing a newspaper article highlighting a rise in divorce cases since 2012.

“Is this telling us that people are not matured, even beyond 18? That we have to look deeper to determine what is the (marriage) age?”

"I hear people say at 18 people are responsible, who says that? Where's the justification?"

Samuel said in order to properly discuss these factors, the issue should be referred to a Joint Select Committee (JSC) for discussion.

The Bill seeks to amend the following Acts:

The Bill also seeks to harmonize the aforementioned marriage statutes across the board by raising the legal age of marriage to eighteen years; repealing any parental consent for a marriage; creating an offence where it is illegal to solemnise a marriage of a person who is under the age of eighteen years, and extending the hours in which a marriage can be solemnized.

For full details on the Bill see here: http://bit.ly/2jATBto